That a play can be so dramatically devastating and yet satisfying is testament to the rarely, if ever, matched genius of playwright Ray Lawler.

The 175 minutes (including two intervals) fly by, the audience spellbound by the characters, the drama, the language, the portrait of a Melbourne that will never be seen again.

Alison Whyte adds yet another fascinating characterization to her seemingly infinite repertoire. She is heartbreaking as the self-deluded Olive, who is bordering on crazy but completely understandable in Whyte’s incredibly capable hands.

Helen Thomson is pitch perfect as the brittle, snooty Pearl, landing many welcome laughs with subtle flair. Eloise Winstock mines a range of layers for the sweet hearted Bubba, neighbor from a time when fences were lower. 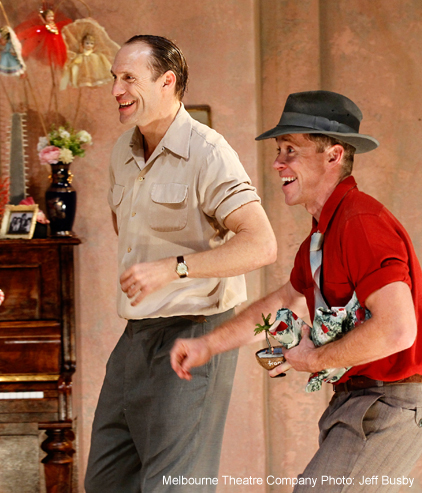 The entire company of seven just seemed to ‘be’ their characters in complete antithesis to the ‘look at us we’re acting’ style so often seen. Having a few lesser-known performers in the cast helped with this.

Mentioning lighting sounds like a perfunctory nod but the range of shadows and light on Ralph Myers’ single, somewhat stark, set was consistently excellent. Use of footlights to create larger than life shadow figures on the back walls was very effective. Well done Damien Cooper. Dale Ferguson’s costumes managed to be delightful without resorting to any garish or obvious flourishes.

Congratulations to Armfield, his cast and creative team for such a fully realised piece of theatre. Summer of the Seventeenth Doll is a must see production.