Grand and austere on the outside, the auditorium of Munich Opera House glitters like a musk and gold jewelry box. Dress standards are uniformly high but the friendly warmth seen in the Vienna houses is noticeable missing. 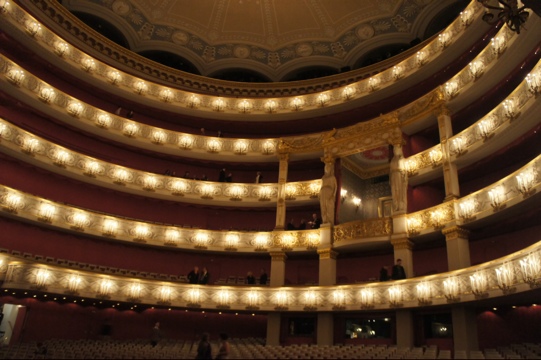 A flick through the coming attractions indicates that Munich opera-goers enjoy their starry casts, also evidenced by the two offerings caught here. Anna Netrebko must be a special favourite as prices for her upcoming I Capuleti e i Montecchi are exactly double most other forthcoming operas.

Baysiche Staatsoper’s foyer gift stand, presided over by a sternly forbidding woman, has a range t-shirts related to booing. Thankfully no boos were heard on this pleasant weekend of opera and ballet.

Marina Poplavskaya is extraordinarily beautiful to see and hear in person, video footage just does not do her justice. An established star, it cannot be long until she reaches true superstar status, such is the quality of her singing, acting and beauty.

Poplavskaya’s Violetta is a fragile Grace Kelly blonde. Nonchalant and disaffected, she drifts through parties, forever putting cigarettes in her mouth (but never lighting them). So weak with illness is she at the end that she sings the entire “Addio del passato” lying down, only able to sit up when Alfredo enters. Poplavskaya is riveting throughout and heartbreaking in the end. The silvery lustre of her voice is almost too strong for the role; she should be playing Queens not courtesans.

Fast rising tenor James Valenti is a stunning sight on stage, as if he just walked off the set of a daytime soap opera or off the field from an AFL football match. If Poplavskaya is tall, Valenti is even taller and together they are as attractive a couple as ever likely to be seen. Wide-eyed with love and dashingly heroic at times, Valenti is an ideal leading man. Whilst his “De miei bolenti spiriti” drew rousing cheers, his subsequent aria “Oh mio rimorso”, the final note of which was sung down the octave, was met with with silence. The strength and beauty of his voice can only benefit from continued performance experience.

Leo Nucci was all class, his molten bass voice in absolutely top form. Nucci’s characterisation of Giorgio was particularly stern, a father so harsh that he hit his son in the face, knocking Alfredo to the ground after “Di Provenza il mar”. (Crying on the ground, Alfredo then found the invitation to Flora’s, which Violetta had thrown as a paper airplane)

Act one was set before a black wall featuring open doors which showed a red wall with doors in the background. A huge number of chorus party guests entered as an endless shuffling conga line, woman in silvery turbans, men in top hat and tails. Act two began with a couple of deck chairs placed on a stage of autumn leaves in front of a silvery backdrop. Side of stage, fly lines and all, was completely exposed for no clear reason. Flora’s party had a large low chandelier. The final act was set on a makeshift bed downstage in front of a scrim. 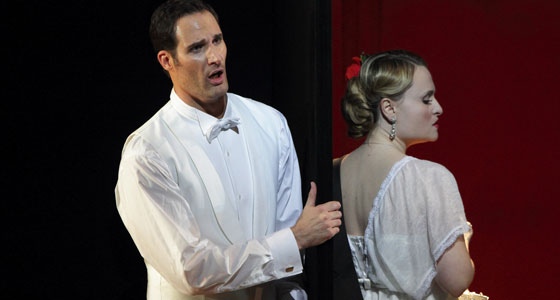 One of the weakest elements of staging was Flora’s party. Rather than being entertained by dancers, the entire chorus, in black with black eye masks, sang the gypsy and toreador songs, bobbing in time like six-year-olds. An eerie touch was the use of the scrim in the death scene-instead of Violetta seeing out, people of the carnival all crowded up to look at in at her.

Overall, talent of the performers won out. Man in Chair is now a passionate fan of Poplavskaya, and is unspeakably jealous that James Valenti is only going to Sydney, not Melbourne, for Opera Australia’s Lucia di Lammermoor.

That Roberto Alagna is a star of the highest magnitude is of no doubt whatsoever. To see him in action is to see a masterful professional in complete control of his powers. His charm, acting ability and magnificent tenor voice seem to just all come together with such incredible ease that going to work every day must be such a pleasure for him. And when we get to share that work, it is our pleasure as well. Alagna’s confidence shines through in every scene, and the role of Pinkerton suits his voice perfectly.

A lesser soprano could find herself completely dominated or eclipsed by Alagna’s power, but this is not the case for Svetla Vassileva, her voice full of strength and stamina for the demanding role of Cio-Cio-San. Vassileva gives as good as she gets, so to speak, and the extended love duets at the end of act one were without a doubt the glimmering showpiece of the evening. Vassileva’s understated acting style captures the steely resolve of Butterfly as well as the Japanese way of not showing emotion. When she does let loose briefly, at the prospect of Pinkerton returning, she is like a giggling Japanese schoolgirl at a concert.

Act one opened with the impressively constructed house placed on an angle so that action could take place in the foreground. For act two, it was rotated to face front and opened for the interior action to unfold. While the decorative setting was solidly attractive, the costumes of the 39 year old production have seen better days. The colours, as well as being quite shabby and dull, followed no particular tonal scheme or connection.

Cio-Cio-San did not seem to mind but Man in Chair found it odd that her three year old half-Japanese/half-American infant had been replaced by a seven year old German boy.

The extended musical interlude of act two, where the household awaits the return of the master’s ship, featured superb playing from the Bayerischen Staatsorchesters.

Not a particularly insightful evening but one of pure enjoyment nonetheless.

Read Man in Chair’s report on Vienna Opera, which included Roberto Alagna in recital and Jonas Kaufmann in Faust.

This translation of the title may be unfamiliar but the music and dance are certainly recognisable in all their glory.

A totally sumptuous, lovingly staged production introduces a new generation to of one of ballet’s all time classics. With special children’s prices, the auditorium was full of wriggling but generally wide-eyed youngsters ready to enter a world of magic (apart from the little boy one row ahead who burst into tears about two minutes in when he realised what he had been dragged along to see. He calmed down a bit after the entrance of Carabosse who at least looked a bit scary and hence more suitable for boys to be watching) 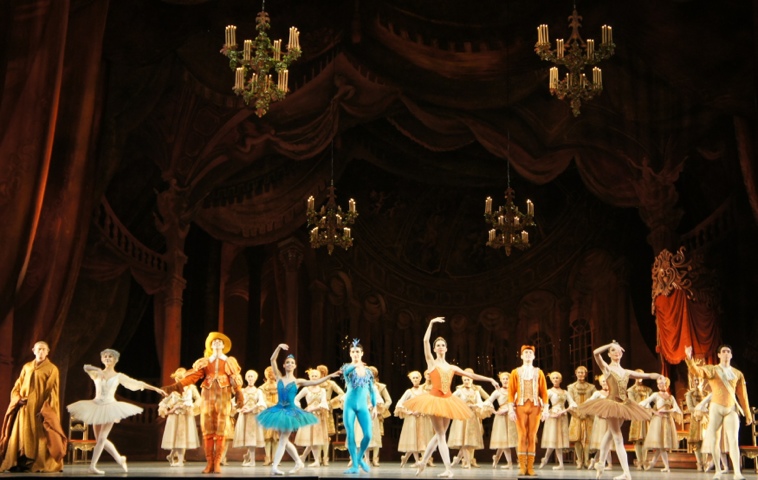 Designed on a massive scale, the multitude of sets were all quite gorgeous, the exquisite costumes even more so. The use of colour was superb, such as Prince Desire standing out in powder blue against the autumnal tones of the forest in act two.

Using the traditional Marius Petipa choreography, the dance was stunning throughout. A consistent highlight was actually the corps de ballet, whose uniform precision was a thing of real beauty. Solos heated up in act three, Aurora’s Wedding, which could have happily gone on all night.

Incredibly petite Lucia Lacarra was blessed with an inner glow as Princess Aurora, making her magnificent dancing all the more enjoyable to watch. The supremely tall and graceful Marlon Dino was a real discovery as Prince Desire. His sensitive, expressive face capturing the love and devotion of the prince, and his simultaneously athletic and elegant dance truly magnificent to behold. The divine pair were in perfect synergy, their mutual trust and respect evident in every step. 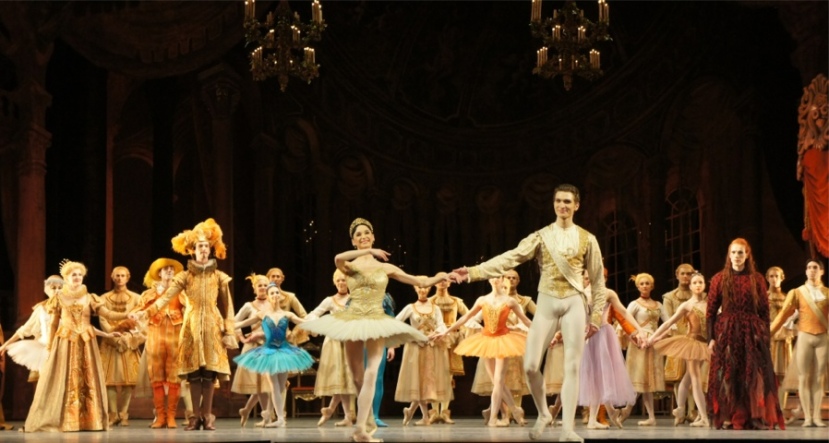 Arts appreciation in Munich finished on a high with Sleeping Beauty.