Foremost in the success of the staging is the wonderful cast, clearly chosen with great care for their talent and suitability in the well-known principal roles. Uniformly strong, the singing and acting, humour and chemistry are all that one could wish for.

Director Hugh Halliday has imbued proceedings with an infectious joy that comes pouring out across the footlights, leaving the audience quite elated (despite the very sad ending). Camaraderie is particularly high amongst the four best friends, their clowning and affection suggestive of a larger life beyond the brief scenes of the opera. This natural companionship was particularly impressive given the range of ages of the four, which was not even remotely noticeable as any sort of issue such was the focus and generous talents of the performers.

A revival from the 2008 season, the production features Richard Jeziorny’s clever sets, which fit together in different ways to create a neat continuum between the three locations of the story. A star cloth creates an elegant finishing touch to acts two and four.

Lighting by Scott Allan is highly atmospheric, although the necessary dinginess at times leaves the actors insufficiently lit for their faces to be clearly seen.

Melbourne Opera regular Roy Best is in excellent voice as Rodolfo, soaring to the high notes of the demanding role. Phillip Calcagno is a wonderfully romantic and flamboyant Marcello, commanding attention and enjoying palpable chemistry with Rodolfo, Musetta and even Mimi at the start of act three. Calcagno sings the baritone role with ease, his voice a pleasure to hear.

Experienced bass Steven Gallop adds gravitas to the humble Colline, giving a centred, carefully measured performance of his act four “Old Coat” aria. Newcomer Nathan Lay makes an auspicious debut as Schaunard, singing with strength and clarity and adding a cheeky sense of humour to the role. For a professional debut, Lay showed a remarkable level of stagecraft and vocal control, making the most of his moments to shine whilst also working very effectively as part of a team with his fellow cast members.

It would be hard to find two more beautiful and talented leading ladies than Lee Abrahmsen and Antoinette Halloran. Abrahmsen, almost too radiantly gorgeous as the sickly Mimi, sings exquisitely, her pure, golden soprano in excellent form. Subtly increasing in vulnerable fragility as the tragic end approaches, Abrahmsen has a gently understated acting style that brings the audience to her, creating an attachment that makes the final moments all the more heart wrenching.

The vivacious Halloran lifts the energy measurably whenever she sets foot on stage, absolutely sparkling as the conceited but ultimately kindhearted Musetta. Making her debut in the role, Halloran’s flair and glorious singing are so well suited that she will surely play it again in the future. 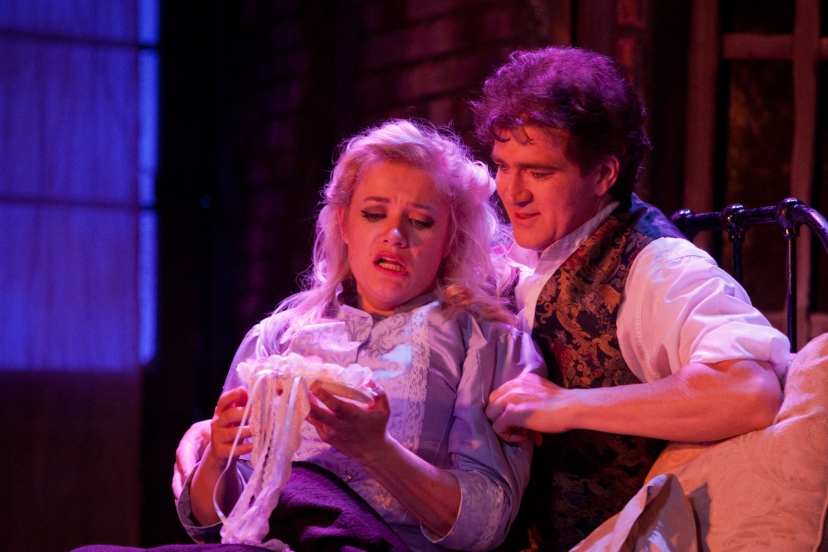 The perfect opera for newcomers to the form, La Boheme continues at the Athenaeum Theatre before a one-night showing at Robert Blackwood Hall, Monash University.

This review was published on Theatre People on 4 March 2012.