When New York’s Metropolitan Opera decided to stage a new production of Wagner’s epic Ring cycle, their first in over 20 years, Director Susan Froemke was there to capture every twist and turn of the arduous, visionary process.

More than a special event for opera and music lovers, Froemke’s new film Wagner’s Dream is a fascinating insight into one of the world’s largest arts organisations. Cameras were allowed to capture the tension, passion and jubilation in workshops, production meetings, rehearsals, backstage, front of house, dressing rooms and more. Lovers of the arts and theatre will find this an absorbing and highly enjoyable film even without any knowledge of Wagner.

The Met made an interesting choice in presenting their new Ring Cycle, one that they were surely most grateful of as the work developed. Instead of presenting the four operas as a cycle, they premiered two in the 2010-11 season followed by another two in 2011-12 season. This twenty-month schedule culminated finally in three complete cycles of The Ring in April/May this year. I was fortunate enough to attend two of these complete cycles.

Footage in the film stretches back even further to 2008 when the ambitious process began. Met General Manager Peter Gelb selected cutting-edge Director Robert Lepage to bring the new Ring to the Met. Prolific artist Lepage (below, left, with Gelb) is well known for his highly successful Las Vegas Cirque du Soleil production Ka, and also previously directed Le Damnation de Faust at the Met. Lepage’s creations are workshopped and built at his production company Ex Machina in Quebec, Canada.

Of particular interest in Lepage’s work is the use of projections that react and respond to the performers. Das Rheingold opens with the three Rhinemaidens swimming underwater and the amount of bubbles seen above them in is proportion to the amount of breath they release as they sing.  On the banks of the Rhine, pebbles and silt cascade wherever the maidens move. This live interaction creates an added dimension to the use of projections, which can otherwise be quite rigid.

The entrance of three swimming, singing maidens is just one example of the extraordinary demands on the staging of The Ring, hence the title of the film. It is stated that it was Wagner’s dream to see his work staged in a way that could present all the theatrical magic of the supernatural world he had written about in his operas.

Lepage’s idea to unify the cycle was to have a single set that could represent all the locations and action of the four operas. A set of 24 beams was built, joined by a central backbone that allowed them to spin and to lock in place. Progress in this creation is shown from the smallest model, to further prototypes to the full scale “Machine” on stage at the Met, where the floor had to be reinforced to cope with the 45-ton weight. An example of the type of candid conversation shown is the anxiety of the technicians at Ex Machina as they prepare to hand over their creation to the crew at the Met.

The process is personalized with a focus on some of the leading players in the cast. Singers such as Stephanie Blythe and Bryn Terfel are seen at rehearsal, with legendary Met conductor James Levine leading the orchestra in the early performances.

A significant portion of the films focuses on American soprano Deborah Voigt, honoured by the Met’s choice to have her debut in the central role of Brünnhilde for the new production. Frequent Met Live in HD viewers will already be accustomed to Voigt’s warm, engaging persona. She is a great sport here, allowing herself to be filmed at rehearsal, in the make-up chair and even back stage directly after a significant, and potentially embarrassing, mishap during a performance.

Having seen Voigt live in the role, I must say that her warmth and passion travelled effortlessly across the footlights and her voice sounded wonderful. She really engaged the audience as the plucky heroine Brünnhilde and had them on her side all the way.

Disaster occured before the premiere of the third opera, Siegfried, when the tenor set to play the title role had to pull out of the show. Enter Texan tenor Jay Hunter Morris, who saved the day and made the role his own. There is an amusing aspect to hearing Morris’ breathless southern twang in interviews in contrast to his heroic on-stage character.

The film covers the cycle right up to February of this year, when the new staging of Götterdämmerung (below) premiered.

Viewers intrigued by the work shown in Wagner’s Dream can view the Live in HD Ring cycle in cinemas, including Melbourne’s Nova cinema, from June.

For those who would love to experience the live production shown in the film, the Met will be staging three cycles of The Ring again next year in April/May.

Closer to home, we have the much anticipated new Ring cycle by Opera Australia at Melbourne’s State Theatre in November/December 2013.

Finally, for those inspired to see Deborah Voigt live, she is performing with the magnificent MSO in Melbourne on Wednesday 27 June 2012 at Melbourne Town Hall and in Sydney on Friday 29 June 2012 at the Sydney Opera House Concert Hall. 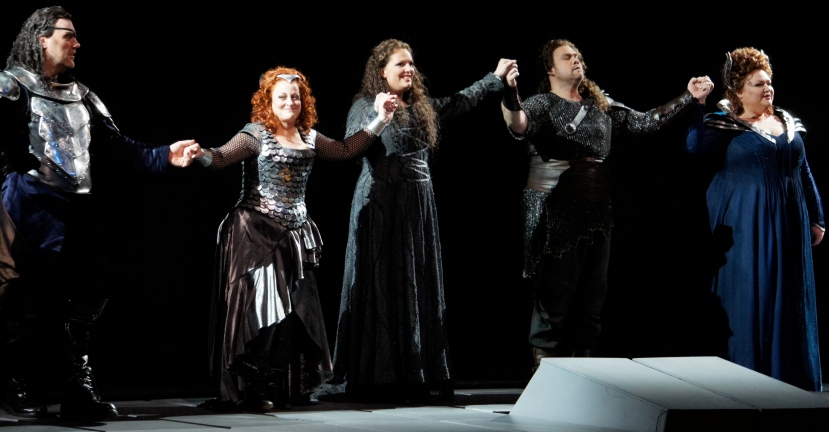