A powerful woman comes to favour her youngest daughter – sound familiar? Even when scheduling this bold adaptation a year ago, MTC could not have foreseen how timely and relevant the concept would be in 2012. 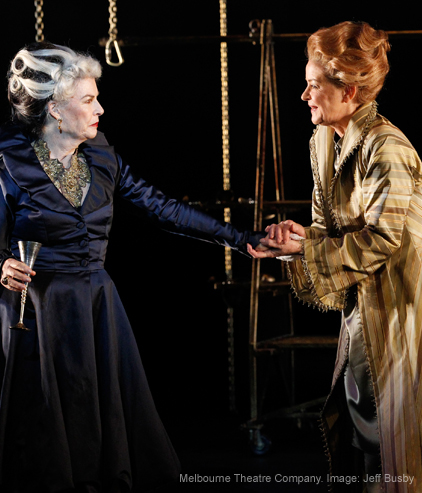 As theatrical conceits go, the gender switch for the title character in Shakespeare’s epic tragedy turns out to be so natural that newcomers to the text would be hard pressed to imagine the original version. A mother’s relationship with her daughters and a woman’s position in a powerful assembly of men are clear and involving sources of drama and conflict.

And what a queen we have in living legend of the stage Robyn Nevin. An electric presence, Nevin commands the stage, conveying a complete physical characterisation of the challenging and highly coveted role. Beginning in regal blood red, her wardrobe and hair deteriorate with the queen’s loss of power and sanity. While it is difficult at times to tune the ear to all of Nevin’s speech, the strength of her acting shines through, creating a force that is felt throughout the play even when she is offstage. 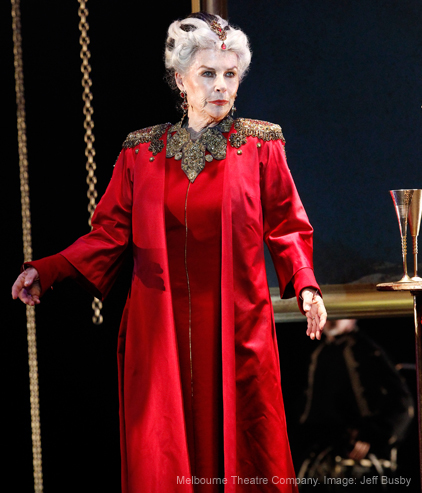 Rachel McDonald, in her MTC directorial debut, has staged an illuminating and accessible reading of the text. McDonald’s vision is clearly a massive factor in the success of the switch from king to queen. She has done an excellent job in uniting the actors to an evenly matched style and energy. Stage action is tightly focused at all times and the wieldy length is kept under three hours with choice cuts and completely fluid staging. Nigel Poulton provides strong support with his excellent fight choreography.

While Tracy Grant Lord’s designs are initially visually striking, they fall short in interest over the course of the play. The lack of a common theme to the costumes may allow a kind of timelessness, but the mixture of periods in the clothing creates a similar disappointing mishmash to that seen in Graeme Murphy’s 2011 Romeo and Juliet for Australian Ballet.

The set, expertly lit by Niklas Pajanti, consists for the most part of a number of gold chains hanging from the fly tower. These create an interesting percussive effect when coiling on the floor but, overall, do not take the place of a more tangible, constructed set. Act one’s storm sequence is certainly a highlight in the staging. 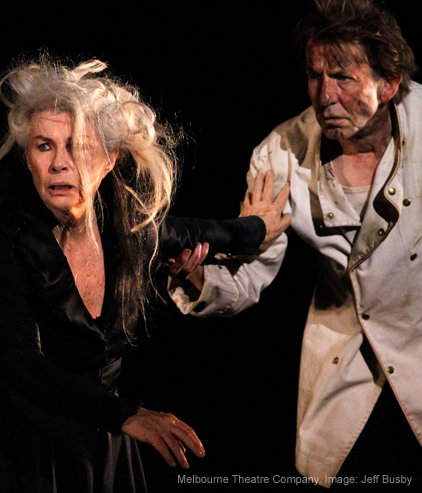 An economic company of only 10 plays the 16 or so characters and various supernumeraries. Speaking in natural, neutral accents, the company works as one to deliver the story in compelling style. Robert Menzies is of particular value as Kent, complementing his excellent delivery with an extra spark in his eye. Nicholas Hammond achieves two of the most distinct characterisations, as the odious Cornwall and the kindly doctor. Richard Piper’s gruff, expressive tones give Gloucester a natural, sympathetic countenance. MTC newcomer Rohan Nichol’s buff physique is an asset when Edgar roams the earth as mad Tom dressed only in brief black shorts. Nichol achieves a particularly natural delivery of the dialogue. 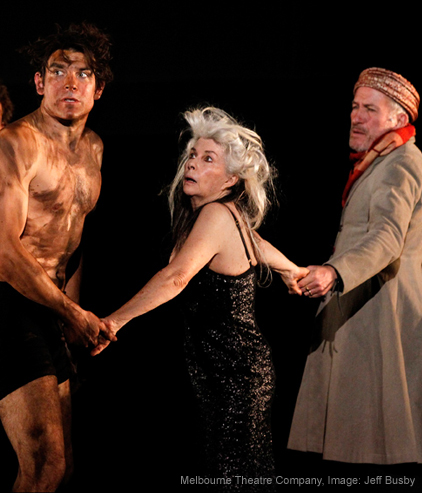 With Queen Lear joining National Interest, an associated element to be celebrated in MTC’s season programming is the simultaneous headlining of two women of a certain age. In a time of youth worship, airbrushing and surgical enhancement, it is a sterling achievement to see billboards featuring two very real and incredibly talented women. 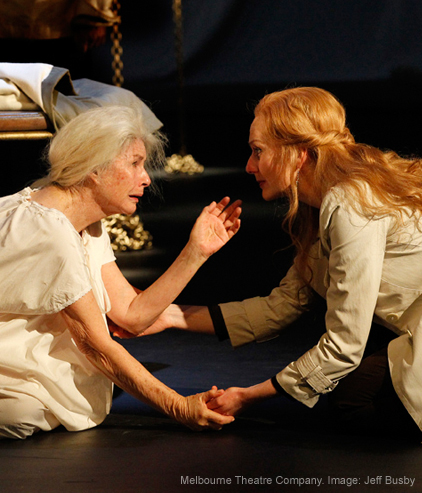 Man in Chair attended Queen Lear as a guest of Audi Centre Melbourne.