Her upper range fortuitously extended after a taxi cab crash, Florence Foster Jenkins had the late-in-life singing career of her dreams, even though the audience could not hear the way she sounded in those dreams. Hearing herself as a glorious operatic diva, Foster Jenkins straddled the line between resilience and madness, amusing ever-growing crowds with her utter lack of musicality.

Told as a kind of platonic love story, Stephen Temperley’s two-hander Souvenir features moments to treasure, with plenty of in jokes for the arts cognoscenti. A rumination on both the folly of ego and the precarious balance between art and commerce, the scenario leaves us all to wonder if perhaps there is not an aspect or two of our own lives that do not come across to others the way we imagine.

Beginning in 1964, pianist Cosmé McMoon (Stephen McIntyre) reminisces on his career as accompanist and musical director for deluded society matron Florence Foster Jenkins (Helen Noonan). At the heart of the play is the push and pull felt by McMoon as his dream of independent fame ebbs away while propping up Foster Jenkins in her increasingly lavish recitals. Try as he might to have his singer see the light, her insistent beliefs are more powerful than any arguments he can muster. After a moving climactic moment in which Foster Jenkins finally hears the true reaction of the crowds, the tender kindness McMoon shows her is as genuine and touching as any traditional romance.

The play, as directed by Peter J Adams, begins well, energized by the delicious anticipation of waiting to hear Foster Jenkins sing for the first time. Early humour crackles with the audience all well and truly in on the joke at hand. If act one subsequently drags a little, the action picks up in act two with an extended sequence on Florence’s triumphant, standing room only Carnegie Hall concert. The conceit of a “costume for every song” is well realised, adding to the humour of the singing.

Matthew Aberline’s spare but elegant set design is suitable for the intimate venue, and his costumes play a significant role in the story for both characters. Sound is perfectly clear, though one wonders how the final dreamlike number may have sounded without the amplification that was used throughout. Suzanne Franke’s lighting effectively represents the inner monologues and the concert settings. 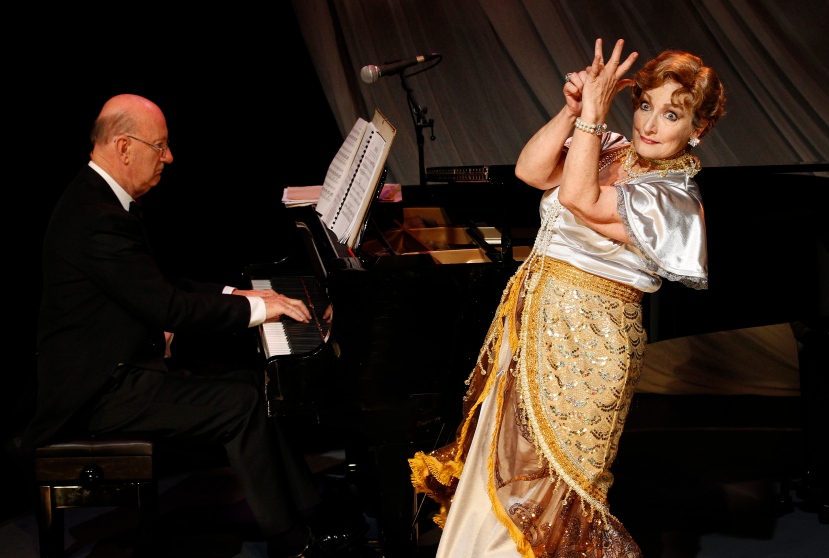 If McIntyre has none of the Hispanic appearance and temperament of McMoon, he more than makes up for it with his superb piano playing. Acting as the audience’s guide, McIntyre plays the wry humour well, landing many a laugh with just a subtle slump or eye roll. His carefully measured performance of this very large role will no doubt become more relaxed and natural as the season progresses.

Noonan is a delight as the great woman herself, convincingly creating and maintaining Foster Jenkins’ imaginary world of vocal beauty, despite being given little in the way of backstory for the character in her scenes. Noonan neatly plays the comedy completely straight, a fine achievement given the almost ridiculous vocal stylings needed for the role. Flat notes, wrong notes and hideous tempo errors are presented with the flair of an actress who really knows how to sing. Foster Jenkins may have been quite absurd but Noonan finds her humanity, and draws us into her affection, making the dramatic realization scene all the more moving.

Souvenir continues at Chapel off Chapel until 10 March 2013.