A play written to have the audience as a fly on the wall of a dysfunctional family Christmas turns us instead into onlookers at a distant aquarium as MTC ruins the most anticipated Broadway import of their 2013 season.

Circumstances seemed to bode well for the opening. How appropriate to watch a play set in the desert while Melbourne endures an infernal heat wave. An early line of dialogue about the hours of endless sunshine scored a laugh of recognition.

But this may be where the recognition stopped. This very American play is a difficult sell for Australian audiences on two levels. There are several US references that do not translate, such as Bryn Mawr, and Loehmann’s and Brooks Brothers. Bel Air and Venice Beach may have some recognition, but the significance of other LA suburbs such as Laurel Canyon, Pasadena and Encino is largely lost. More importantly, it is the neurotic introspection of every detail of their lives and relationships that seems to be a uniquely American trait. Watching this compulsive self-obsession can be a big turn off. 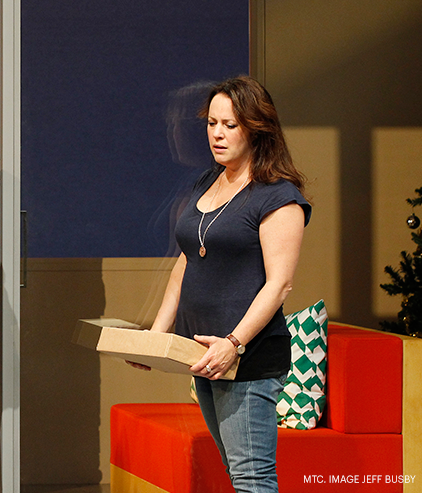 The plot sees a brother and sister visit their wealthy retired parents for Christmas at their Palm Springs home. Polly and Lyman Wyeth have lived in Hollywood’s spotlight but are now enjoying a gilded retirement of virtual seclusion. Polly grudgingly shelters her sister Silda, a recovering alcoholic. The catalyst for the actions is the memoir daughter Brooke Wyeth has written about a harrowing time in their lives.

Viewers of cherished TV soap Brothers and Sisters will recognize familiar territory as TV creator/playwright Jon Robin Baitz slips in references to the aftermath of September 11 and the effects of the war in Iraq. There’s even a reference to Ojai. 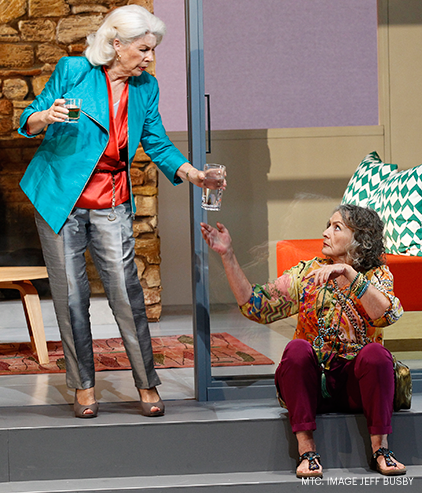 While Esther Marie Hayes’ costumes are equal parts gaudy and drab, not to mention ill fitting, it is the set design that really jars, and ultimately sabotages the entire production. Newcomer Callum Morton may be an “internationally acclaimed visual artist” but he is no set designer.

The Wyeth living room filled the space of the Booth Theatre stage on Broadway, effectively inviting the audience into a world of tastefully understated glamour. Morton’s set is dwarfed by the Sumner stage, and despite its realistic lappearance makes little sense. With windows on four sides, it is not clear how it could possibly be part of the rest of the house. The edge of a swimming pool is a nice touch but its surrounding is grey set paint – no decking or paving and certainly no poolside furniture or pot plants. The interior features a cluttered bookshelf, an uncomfortable red couch and a couple of dining room chairs being inappropriately used as lounge chairs.

Worst of all is the use of the front glass wall of the room. While the majority of act one action is set outdoors, ie downstage, act two shifts inside with the main glass door closed. Hence, the voices are amplified and the audience are basically cut off from the very human force that is the basic premise of live theatre. Worse still, there are vertical strips between panes of glass that frequently mask the actors. Characters’ reactions at the climax of the play are dampened to the point of being lost. The whole effect is a gross miscalculation, for which director Sam Strong must bear a significant proportion of the blame.

Strong’s direction delivers fast paced cues and breezy comic moments overall, but the family connection, which would be signified by characters really listening and reacting to each other, is not there yet. 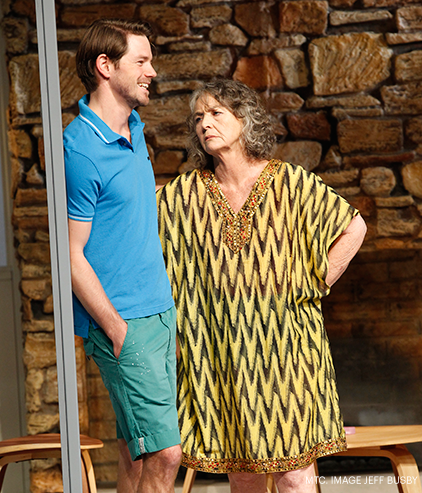 Of the five actors, grand dame Robyn Nevin achieves the most convincing portrayal of an American, even though the material gives her far less to work with than the towering achievement of August: Osage County. Trim, carefully coiffured and tanned, Nevin delivers Polly’s judgmental zingers with aplomb, but with the family dynamic and chemistry not quite there yet she cannot carry the play alone. One particularly poor moment is Polly’s act two entrance after she has read the memoir. The impact of this important moment goes completely unnoticed.

John Gaden and Sue Jones, as Polly’s husband and sister, have the perfect look and maturity for their roles but each has an innately Australian countenance which is difficult to shrug off. Jones scores well in conveying her perpetual haze of sixties hangover, but the depth of Sinda’s relationship with her sister is not fully realized. 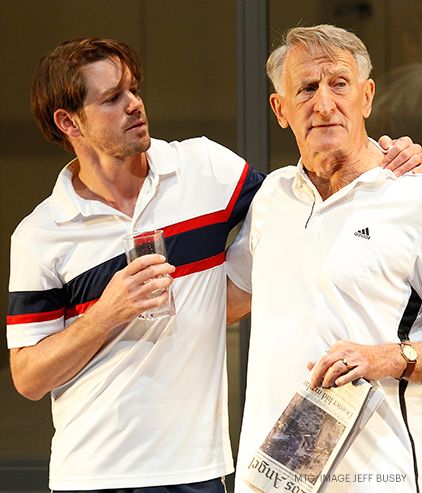 Ian Meadows generally suits the part of younger son Trip Wyeth, and his characterization successfully develops throughout the play. It is unfortunate that his very significant final exit is lost in an ill-timed blackout.

In the crucial role of troubled daughter Brooke Wyeth, Sacha Horler is somewhat undercooked. The material is partly to blame, as Brooke has the majority of the over-analysis, but Horler does not sufficiently engage the audience’s affection and sympathy. Horler also suffers the most from the decision to keep the characters behind glass, as her reaction to the disturbing family revelation is significantly muted.

MTC has not disappointed as badly with an international hit since their interpretation of the National Theatre smash The History Boys. Thank goodness One Man, Two Guvnors is a full overseas import.

Other Desert Cities continues at Sumner Theatre, The Southbank Theatre until 17 April 2013.