Sumptuous, witty staging, top-notch cast and beautiful singing mark the welcome return of a production that is one of the very best Australian artistic collaborations in the repertoire.

A well-chosen ray of light amidst the sturm und drang of this Sydney Winter season, Simon Phillips’ 2001 staging of Donizetti’s The Elixir of Love (L’elisir d’amore) remains an expertly realised adaptation. Direction, translation, choreography, set design, props, costumes and even sound effects all make a cleverly integrated contribution to the delicious humour on display. Just as admirable is the fact that rather than playing for easy laughs, each of these elements support the opera itself in this ingenious version.

The 1915 Australian rural setting is depicted by sets and props made entirely from corrugated iron. The combined effect is quite stunning, even magical, and is markedly more lavish than many a high concept/less-is-more/ emperor’s new clothes type of production. The rolling, dry plain hills and sapphire sky of Michael Scott-Mitchell’s brilliant design are beautifully lit by Nick Schlieper, giving the corrugations gleam and depth. As the scenes progress, we meet a menagerie of merry farm animals, from nodding, shearable sheep to indignantly mooing cows, all fashioned from various combinations of the same corrugated iron as the sets.

What a difference a decade makes. Unlike the crass excess of The Turk in Italy, in this earlier adaptation Phillips trusts the innate humour and charm of the source material, just making gentle, genuinely funny tweaks to the text with fair dinkum jingoisms rather than resorting to a barrage of smut.

Phillips’ direction brings out as much colour and interest as possible in the admittedly fairly straightforward characters, eliciting evenly matched, neatly underplayed comic performances from the five leading players. In the absence of a choreography credit in the program, Phillips is also presumably responsible for the cheeky bit of Heel and Toe Polka that give the chorus a genuine Bachelor and Spinsters Ball feeling. Another amusing sequence for the chorus comes in the second half of act when the women are presented as a gaggle of gossiping chooks in a henhouse. Overall, Phillips develops such an accessible, populist music theatre vibe that one cannot help but imagine how this would fare in place of, and with the advertising budget of, The King and I.

Maestro Guillaume Tourniaire leads the Australian Opera and Ballet Orchestra in a wonderful performance of Donizetti’s much-loved score, providing the finest of support for the singers. Anthony Hunt’s reliably expert preparation of the Opera Australia Chorus gives them a sweet, strikingly uniform tone.

Rachelle Durkin again proves herself a deftly skilled comic actress, generating delightful business without a trace of overacting or look-at-me theatrics. Her expressive face and balletic skill for body language would have made her a world-class silent movie star in a different age. Best of all, Durkin’s soprano has gently matured with a rich, honeyed tone and she sings like a dream. When the comedy has played out, Durkin has her heart on her sleeve as she gives us a moving rendition of Adina’s final aria “Prendi, per me sei libero.” 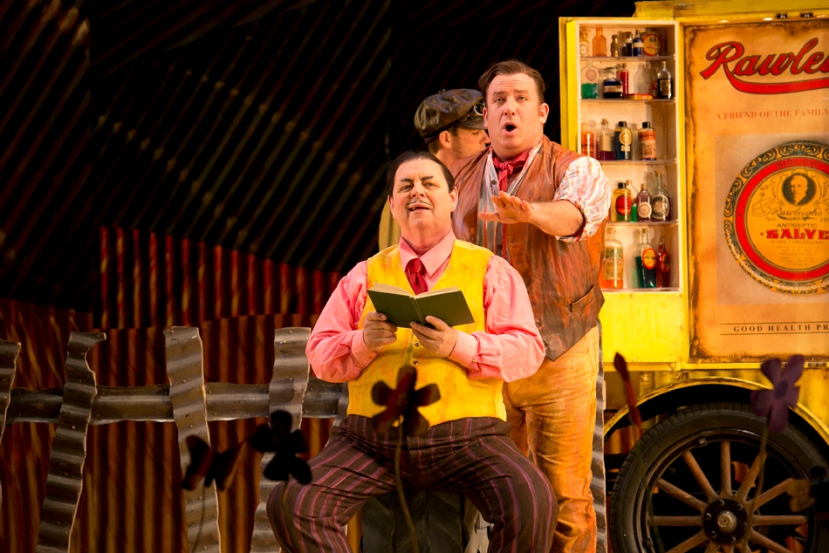 Aldo Di Toro is well cast as wallflower Nemorino, his sympathetic portrayal of the underdog, another true blue tradition, engaging the audience’s affection and support. In splendid voice, Di Toro’s supple tenor rings out true and clear. In keeping with the characterful, authentic direction of the piece, chart-topping aria “Una furtive lagrima” is presented entirely in context, avoiding the temptation to stop the show to milk audience recognition.

Blossoming baritone Samuel Dundas imbues his twerp of a sergeant with wonderfully subtle humour only, conveying the confidently handsome Belcore as clueless to his preening vanity. While possibly a tad light, Dundas’ pure baritone has an elegant legato that is a pleasure to hear.

Redoubtable bass Conal Coad is in deft form, both vocally and physically. His rapid notes are an addictive delight, and he shows himself game for impressive stuntwork on Dulcamara’s van.

The uniform quality of the four principal singers means that the various dueting combinations of characters, one of the great pleasures of The Elixir of Love, is assured. For example, Adina and Dulcamara’s operetta-like showstopper “Io son ricco e tu sei bella” is a lively hoot.

With scant bel canto offerings on the slate for the 2015 season, Sydney fans of bel canto should flock to The Elixir of Love. A perfect evening’s entertainment for newcomers and aficionados alike.

From Opera Australia’s Winter 2015, Man in Chair has also reviewed: