As melodious as it is heartbreaking, Kander and Ebb’s The Scottsboro Boys is a brilliantly conceived combination of upbeat song and downbeat drama.

Having transferred to the West End after a sold out 2013 season at the Young Vic, The Scottsboro Boys can now be considered more successful in London than in New York, where it played a total of only 78 performances on Broadway in 2010. This raises the question as to whether American audiences found it too difficult to smile and clap about a tragedy that should never have been allowed to occur.

In presenting the true story of nine black youths falsely accused of rape in 1931, the musical draws on the unique conceit of an inverted black and white minstrel show. The performers are black, and they portray a smattering of white characters using broad, exaggerated stereotypes. The use of minstrelsy means that the painful story is punctuated with high energy, toe-tapping song and dance, engaging the audience and breaking their hearts all the more.

John Kander and Fred Ebb’s music and lyrics are a marvelous pastiche of soaring gospel and temperate spiritual music, seasoned with the tambourines and tap shoes of minstrels. The result is a score as instantly accessible as an audience could ever be grateful to hear. The songs rank with the best in the Kander and Ebb canon, and have the added bite of the social commentary that elevated numbers such as “If You Could See Her” from Cabaret. One of the best here is “Southern Days,” which begins as an exquisite Negro spiritual, then segues into darker lyric variations.

David Thompson’s concise but powerful book ensures that the dramatic story is grounded in realistic scenes between the big musical numbers. The central injustice is so incomprehensibly unfair that it is just presented in a brisk, matter of fact way rather than trying to explain or justify it.

Multi-talented director/choreographer Susan Stroman really excels herself here in terms of creating a unique piece of theatre. Energy levels are sky high, and company dance numbers are as thrilling as they are inventive. Generally more at home with a traditional book musical, Stroman has shaped The Scottsboro Boys as a true concept musical, in which all the elements support each other to the greater good of the story.

Displaying her expertise with props, Stroman tells the entire story with just a set of chairs. This exposes the content and the cast, which are both more than up to the scrutiny. Crisp comical shadow puppetry illustrates Haywood’s courtroom ditty “Make Friends With The Truth.” A whiz with tap, Stroman stages a terrific tap trio in “Electric Chair,” in which youngest cast member Keenan Munn-Francis is particularly impressive.

Veteran actor Julian Glover brings a distinguished and wry presence to the role of The Interlocutor. Dawn Hope is a gracious, sympathetic onlooker as the silent character of The Lady, who is eventually shown as representing racial activist Rosa Parks.

The London is season is anchored by a superlative lead performance from Brandon Victor Dixon as indomitable prisoner Haywood Patterson. A magnetic, charismatic actor, Dixon fully engages our sympathy and affection for the noble Haywood, giving a performance that is all the more compelling for his gentle, understated approach. Dixon’s singing style is also tender, almost sensuous at times, and is an absolute pleasure to hear. 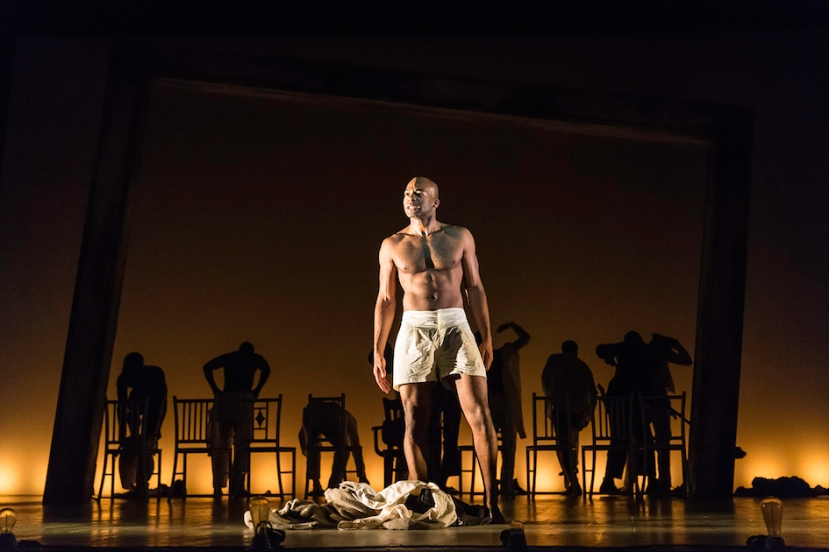 The entire cast are true triple threats, who are expending their maximum possible performance energy. If the show had begun again from the start as soon as it ended, I would have been absolutely delighted.

The Scottsboro Boys plays at Garrick Theatre, London until 21 February 2015