Tracing the key moments in a pair of relationships, 2009 off-Broadway musical Ordinary Days furtively engages audience interest and affection in its four characters, illustrating the beauty to be found in the ordinary.

For a modern, character-driven musical, there is no better director in Australia than Tyran Parke, a proven master at illuminating the minutiae of human connections. Parke’s subtle, yet highly detailed direction brings the characters vividly to life. Even with only a relatively modest staging, the city of New York is also clearly on board as a vital fifth character.

Adam Gwon’s charming score is through-sung, coming close in style to a song cycle but with strong storytelling threaded throughout. Thirty-something couple Claire and Jason move through a turning point in their relationship, reaching a climax with Claire’s absolutely gorgeous final ballad “I’ll Be Here.”

Twenty-something lost souls Deb and Warren meet by chance and pursue an unlikely friendship. Warren delivers the touching message of the show in the final song “Beautiful,” which both owes a debt of honour to Sondheim’s “Sunday” and also continues the heritage of the focus on the transformative power of art.

It is difficult to overstate the crackling charisma of fresh graduates Nicola Bowman and Joel Granger as Deb and Warren. To watch the pair in action is to watch the leading lights of tomorrow’s musical theatre stage. Bowman’s Deb is part wide-eyed kewpie doll, part tenacious terrier. Watching the character thaw towards unlikely new best friend Warren is a joy. Bringing to mind a young Bernadette Peters, Bowman’s singing is effortlessly superb and her comic timing is extraordinary.

Blessed with a gorgeous smile, Granger glows with magnetic presence, yet also brings a completely endearing vulnerability to Warren. With a sweet, pure singing voice, Granger is the ideal new age leading man. 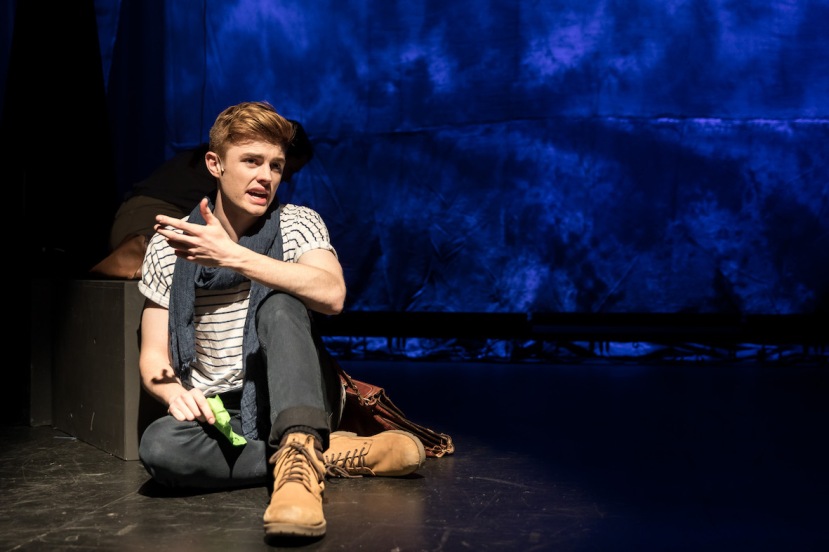 Musical director Stephanie Lewendon-Lowe leads three fellow musicians in a polished performance of the score. The instantly accessible music is heard at its best, and is sure to win over new fans to Gwon’s writing.

Designer Sarah Tulloch makes clever use of floating gauze panels, which represent both skyscrapers and hanging works of art. Pale blue hues in the costume design tie in beautifully with the steely abstract background. Lighting designer Jason Crick ties the look together with temperate tones that reflect the mood of each scene.

Lovers of modern musical theatre are sure to cherish this welcome production of Ordinary Days.

Ordinary Days plays at Chapel off Chapel until 18 June 2017.

Tickets to 21 Chump Street and Ordinary Days can be bought separately or as a package deal.