Clever creative artistry and bountiful talent make for a compelling production of The Coronation of Poppea in this mighty achievement from Lyric Opera of Melbourne. 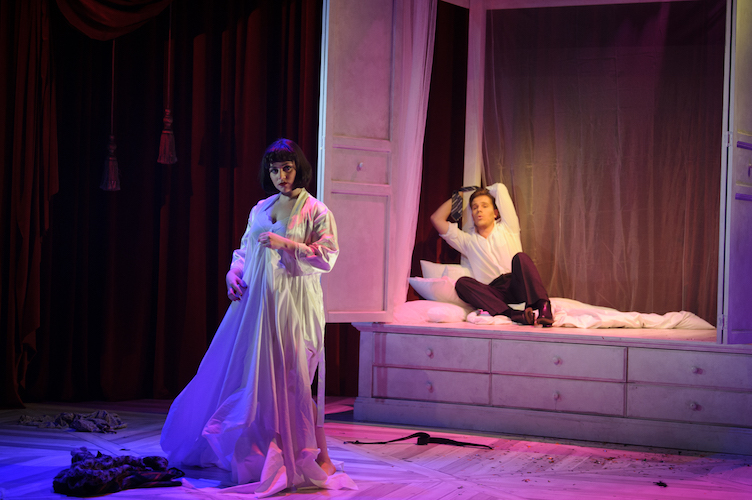 Almost 400 years old, The Coronation of Poppea was written as the word opera was only just coming into use. Monteverdi’s final work shows a depth of accomplishment in fluid storytelling and in the prodigious match of music and dramatic action.

Focusing on the ambition of Poppea to be crowned Empress of Rome, the story involves an inversion of traditional morality. As mistress to Roman Emperor Nero, Poppea is the chief protagonist, while Nero’s wife Ottavia is seen as an obstacle to Poppea’s quest.

The mortal characters share the stage with human embodiments of Virtue, Fortune and Love, with Love proving her power triumphant when she thwarts the attempted murder of Poppea. 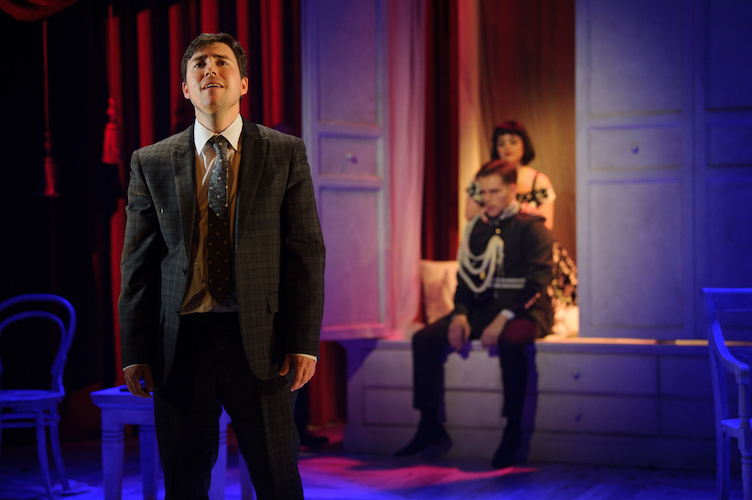 Lyric Opera is largely guided by their dynamic artistic director Patrick Miller, whose meticulous work as musical director for each opera guarantees an experience as enlightening as it is entertaining. In a neat theatrical coup, the company has engaged a director for this production whose passion, intelligence and insight are a worthy match for maestro Miller. The result is a presentation of at least double the quality.

Miller conducts six highly capable musicians who play a range of modern and classical instruments. Monteverdi’s music is beautifully attuned to the voice, and Miller provides sturdy support for his ten cast members. Given the small orchestra, the sound balance is excellent, and the singers can focus on tenderness of expression without requiring an excessive exertion for projection and volume. The quality of the music is first rate and the score is a pleasure to hear.

Well experienced in the world of musical theatre, particularly in boutique productions of similar scale to this one, acclaimed director Tyran Parke works his magic on The Coronation of Poppea to fascinating effect. While the structure of baroque operas can often lead to a stand and sing structure, Parke plays with the flow of arias, having characters hover in the background before their next aria or dwell on stage reflecting on their thoughts after singing. In a key example of this, the corpse of Seneca stays on stage almost thirty minutes before he rises, zombie-like, and forces out the truth about the attempted murder of Poppea.

Parke’s concept is set in an abstract time and place where modern and classical elements coexist. The prologue is confronting for traditional operagoers, with tragic drag queens Virtue and Fortune staggering home to the strains of nightclub music. While this opening deliberately grabs attention, Parke grounds the ensuing action in human truth, leading to a final set of scenes that are as dramatically satisfying as they are moving.

Design is attributed to Robert Sowinski, Dann Barber and Bryn Cullen, who each have areas of expertise yet presumably have worked together closely on this project. A white wooden square playing space stands orthogonally in front of rich red velvet curtains. A grand white armoire houses costume elements in its drawers and a dreamy bedroom behind concertina doors. The unobtrusive lighting design makes subtle use of colour to complement the emotional tone of the scenes. Costuming is an eclectic mix of styles, which make sense in their overall combination and work well for the conceptualisation of each character.

The ten singers are so well matched that it is difficult to designate particular highlights. Rebecca Rashleigh successfully portrays Poppea as a woman who believes in the power and importance of her love. Nicholas Jones makes for a handsome romantic hero as Nero. 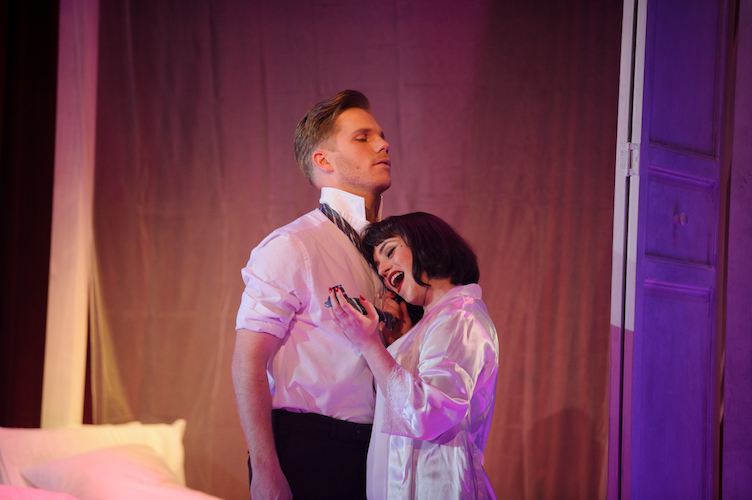 Elizabeth Stannard-Cohen makes Drusilla self-deception entirely believable. Nicholas Tolputt shows the drove of lust that takes noble Ottone to the point of attempting murder on behalf of the object of his affection. As well as showing extraordinary control as a corpse (which is left seated, it must be noted, in a very uncomfortable position), Damian Whiteley brings a fiery passion to ill-fated royal adviser Seneca.

Robert Macfarlane and Hew Wagner are impressively game in their gender fluid portrayals of Fortune and Virtue. Macfarlane, in particular, shows no inhibitions in playing a variety of roles in a range of somewhat unflattering costumes, and his countertenor singing is unwavering in its fine quality.

Alison Lemoh has a radian countenance that lends an attractive presence to (Amor (Love). Bernard Leon provides solid support in the cameo role of Mercury, providing an ongoing air of menace by the character’s almost constant stage presence.

If there is one performance that stands out most strongly it is that of Caroline Vercoe as wronged wife Ottavia. An extraordinary actress who can display powerful, affecting layers of emotion with gentle ease, Vercoe takes a murderous woman and gains our full sympathy. The moving image of the spurned Ottavia leaving Rome as she sings “Addio, Roma! Addio, patria! Amici, addio!” was a memorable moment in the final stages of the opera.

It is disappointing to read in the program notes that this will be the last presentation form Lyric Opera of 2017. Given the dwindling paucity of mainstage opera productions in Melbourne, opera lovers should rally in their support of boutique companies. The quality of this season of The Coronation of Poppea stands mightily on its own merits, and is also very deserving of audience support.

The Coronation of Poppea plays selected dates at Chapel off Chapel until 22 July 2017.