Merrier than ever, The Merry Widow returns in a decadent new production.

The 1920s art deco update is a completely natural fit for the Widow’s world, placing the pleasure-loving characters in a world of protected privilege and opulent glamour. The lavish staging is a significant improvement on the rather forgettable 2012 Opera Australia production, with this current season also distinguished by a new translation from Justin Fleming.

A national treasure if there ever was one, renowned director/choreographer Graeme Murphy imbues the production with his characteristic style. Working with longtime collaborator Janet Vernon (associate director and choreographer), Murphy achieves a seamless blend of style and substance, effortlessly incorporating dance as a key element in the musical numbers.

While the chorus is given more movement than might usually be the case, they acquit themselves admirably in this regard, Murphy’s main choreographic focus is a set of twelve dancers. From saucy grisettes and hapless waiters at Maxim’s to proud Pontevedrian national dancers, the dancers enliven scenes as they perform Murphy’s elegant, inventive choreography.

Set designer Michael Scott-Mitchell has provided sumptuous scenery that is rich in art deco detail. A golden false proscenium with duck motif frames the action, with a full size series of ornate metal panels acting as a kind of show curtain. Black, with gold trim, abounds in acts one and three, with the garden party of act two set before a giant curved impressionist painting of a light-dappled pond. The garden also features the summer house, assignation point for many a pair of lovers, which has the appearance of a giant bird cage, attractively adorned with peacocks.

Jennifer Irwin’s costumes are equally glamorous, capitalizing on the period with flapper fashions for the women and smart formal wear for the men. The women begin in floor length silk gowns in a palette of pale pastels, moving onto light floral pattern and cloche hats for the garden party before changing to glossy geometric patterns for an evening at Maxim’s. Immaculately coiffured wigs complete the picture. 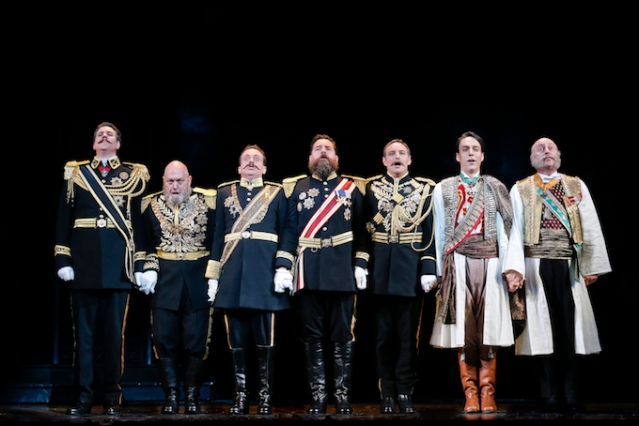 In a performance as elegant as any of the designs on stage, Orchestra Victoria gives a remarkably fine rendition of Lehar’s cherished score. Conductor Vanessa Scammell achieves a delightful Viennese sound, having the strings play with disciplined uniformity and maintaining a gossamer-light touch throughout the other instruments. Scammell’s pristine work allows the hummable tunes to be heard at their very best.

Amplification allows the singers’ voices to be clearly heard without being overly pushed in the very full season of performances. One cost of this aspect is that it can be difficult to determine who is speaking at a given point.

Fleming’s translation keeps the central storyline clear without excising the colourful supporting roles. Many of the songs have been completely refreshed and rewritten, a fact that all but the most conservative aficionados of the score will enjoy. If the sound of Fleming’s language strays from the period setting, it is only to appease the ear of the modern audience. A couple of jokes creak with old age, and the sexist attitude of the period prevails, but this is a most satisfying adaptation overall.

Productions like this have a long lead time, and Murphy was not to know the social environment that would greet the Melbourne season. Given the current long overdue shaming of the misuse of sex by people in power, the pursuit and vision of women as merely sexual objects is quite jarring.

The evening makes something of a slow start, but soon ramps up interest with the arrival of Hanna Glawari, the merry widow herself, and pretty playboy Count Danilo Danilovich. The central concept of the entire revival hinges on the casting of the lead pair with younger performers than usual, and this aim has been fulfilled to sterling effect.

Melbourne-born, international soprano Danielle de Niese makes a wonderful widow, her youth and beauty adding a stirring undertone of urgency to Hanna’s quest to remarry and enjoy love again. De Niese is an accomplished dancer, and handles the choreography with effortless flair. While Murphy’s decision to have Hanna lead “The Grisette’s Song” robs the character of some dignity, it is nonetheless a fine showcase for de Niese’s talents. De Niese has a lush, voluptuous soprano, heard at its best in Murphy’s respectfully modest staging of “Vilia.”

As Count Danilo, Australian tenor Alexander Lewis is a dreamy leading man, personifying the foppish young playboy to a tee. Lewis is a true triple threat performer: a dapper dancer, a magnetic actor and a superb singer. Lewis is in demand on the world stage, include New York’s Metropolitan Opera, but this sensational performance will be sure to drive interest in Lewis making further local appearances.

De Niese and Lewis are well matched and enjoy clear chemistry. Their combined dancing is wonderful, and their acting sustains the will they/won’t they tension above the usual level of a plot contrivance.

Emerging soprano Stacey Alleaume gives another charming performance as Valencienne, singing with lovely sweetness. Rising tenor John Longmuir plays Camille de Rosillon with understated flair, the lovely high, pure tone of his tenor voice sounding particularly beautiful in his big act two solo. Alleaume and Longmuir are given little to distinguish their characters, but their commitment to the roles helps the secondary subplot bubble along.

A strong local cast has been assembled to play the supporting roles. While the engagement of a vocal coach would have helped to smooth the range of accents heard in the dialogue, the performers are musically secure, each making the most of their moments in the spotlight.

David Whitney brings a likable zeal to Baron Mirko Zeta, his fervent approach smoothing over the rather ridiculous shortsighted foolishness of Zeta’s inability to detect his wife’s infidelity.

Benjamin Rasheed provides invaluable support as efficient, all-knowing embassy secretary Njegus, playing the straight man to counterbalance the mania of his colleagues. Rasheed is rewarded with a terrific character number in act three.

Queen of the operettas, The Merry Widow is one of the very last of its genre still standing. Lovers of this style of music will thrill at the scale of this lavish production.