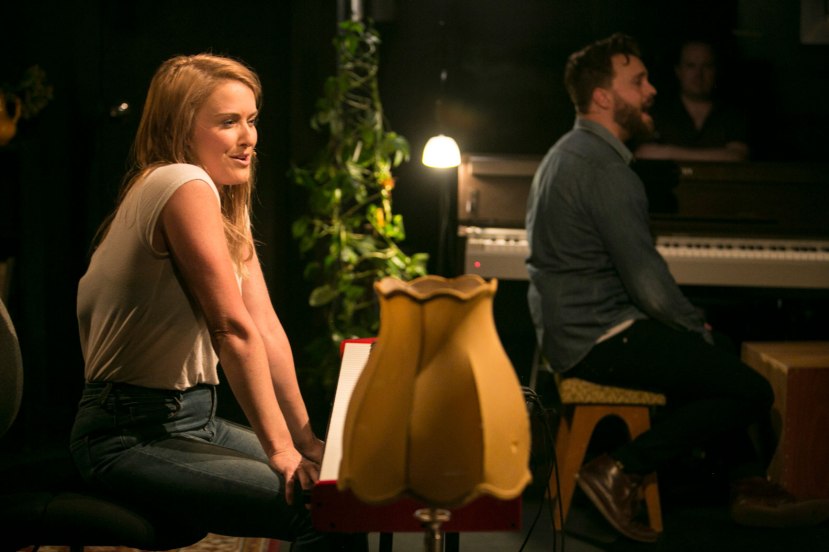 James Cutler, a director of keen intellect and eloquent insight, has added layers to the pleasure and pain of the simultaneously blossoming and imploding relationship. Jamie and Cathy remain on stage, in our view but not each other’s, adding a subtle visual subtext to each other’s stories. Cutler casts the artistic duo as musicians, allowing the extraordinarily talented pair of actors to accompany themselves, and each other, on various instruments kept in their apartment. This concept reaches its pinnacle in their sole combined scene, “The Next Ten Minutes,” in a brief sequence in which each plays one hand on piano as they sing.

Intimate new Melbourne venue MC Showroom is configured into an artfully arranged version of theatre in the round, with Jamie and Cathy’s apartment diagonally staggered across the space. None of the audience are more than three rows from the front, and the action moves around the extremes of the space with natural flow. Designer Marco Fusco has given the staging a very “lived in” vibe, with clothing and props having an authentic, rather than theatrical, feel. A series of lamps designate the various nooks of the apartment, and cast a cosy glow on proceedings.

Working offstage with a full complement of musicians, musical director David Wisken does an incredible of synchronizing and balancing the music with the music played on stage. The music has vibrant and engaging energy, even in Brown’s more mournful moments.

At the heart of the production are, of course, the two lead actors. Entirely believable as a couple, Katie Weston and Andrew Kroenert are perfectly fitted to their roles, both dazzling with their musical expertise in addition their heartfelt acting and singing.

Weston sets the bar sky high in her opening scene, as Cathy finds Jamie’s letter telling her their marriage is over. Weston portrays Cathy’s pain with such raw intensity that the audience feels almost intrusive on her private, painful grief. Moving back to happier, but still tense, times, Weston subtly alters her voice and physicality to convey the impact of Cathy’s journey on her psyche. While her voice on opening night sounded just slightly worn from rehearsals, Weston nevertheless gave everything to the performance, playing the truth of the situation with highly affecting success.

A chameleonic performer, Kroenert shines in this role, giving an equally convincing and involving performance. In a deliberately understated characterisation, Kroenert is unafraid to embrace Jamie’s caddish, driven ways, peeling away the layers of charm as he becomes disaffected with the relationship. Kroenert exhibits the depth of his talent by playing piano or guitar while singing with terrific flair and unflappable confidence.