Opera Australia neatly balances the spectacular with the intimate as the seventh season of firmly established opera attraction Handa Opera on Sydney Harbour turns its sights on one of the world’s most beloved operas, La Bohème. 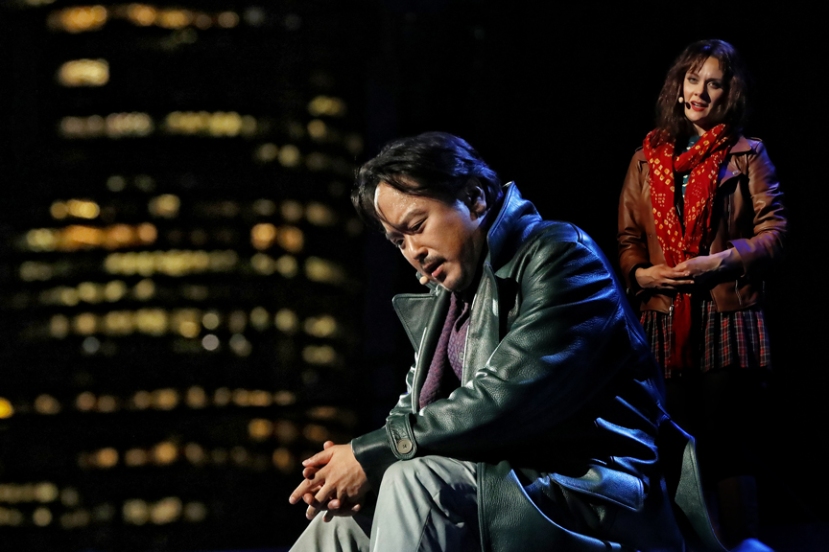 The new production succeeds for the primary reason that it presents the cherished opera as it was intended to be seen. Paris Opera may have recently set La Bohème in outer space, but director Andy Morton maintains the original setting of Paris, adding interest simply and intelligently by updating the time period to 1968. With a cast of excellent singers, the season deserves to be a resounding popular success.

The grand scale of the Harbour Opera widens the lens to view the streetscape around and about the struggling artists’ rooftop garret. Designer Dan Potra encircles the elevated garret with icy cobblestoned streets, where children play, lovers meet, and a petite young woman sells her embroidery on the street before passing by the garret for a chance encounter that is to lead to a passionate love affair. 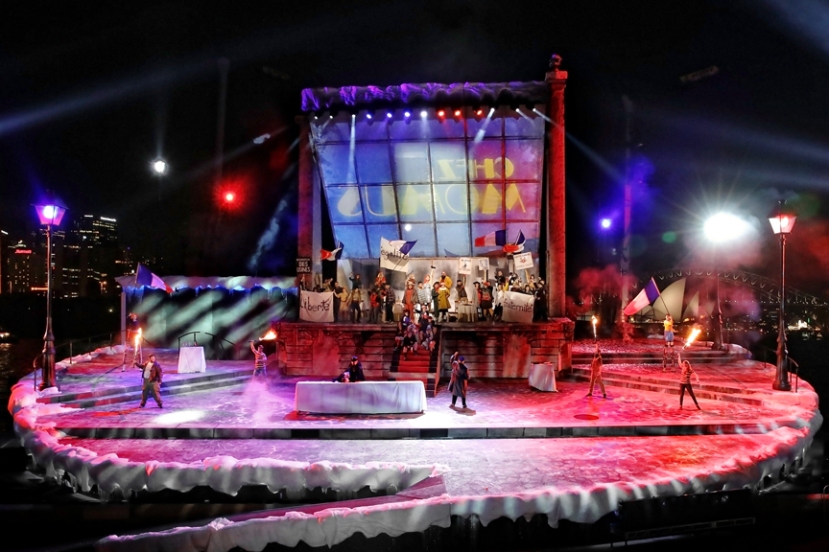 Potra’s vision is enhanced by the video designs of Marco Devetak, which play on the angled window ceiling and a large screen on stage right. While the audience has the Sydney Opera House and Harbour Bridge in its sights, the bohemians look out on the Eiffel Tower. The animated projections are just occasionally a little corny, but in sending images to the 3000-strong seating bank, the idea is as purposeful as it is, quite frequently, attractive.

The 1968 setting gives Potra the scope for relatively modern apparel, while avoiding the need to include any modern technology. It also provides a time when it was actually possible for struggling artists to dwell in the inner-city. Schaunard is a beatnik in salmon root suit. Mimì stands out in chartreuse coat with fluffy white trim. Musetta makes an eye-catching entrance in glittering silver metallic dress with Burgundy faux fur wrap and henna wig. The diva switches to long blonde Barbarella wig and black and red leather outfit when “teaching singing’ in a sex club in act three, before setting aside her glamour for a natural look in act four as the friends deal with the tragedy of Mimì’s impending death. 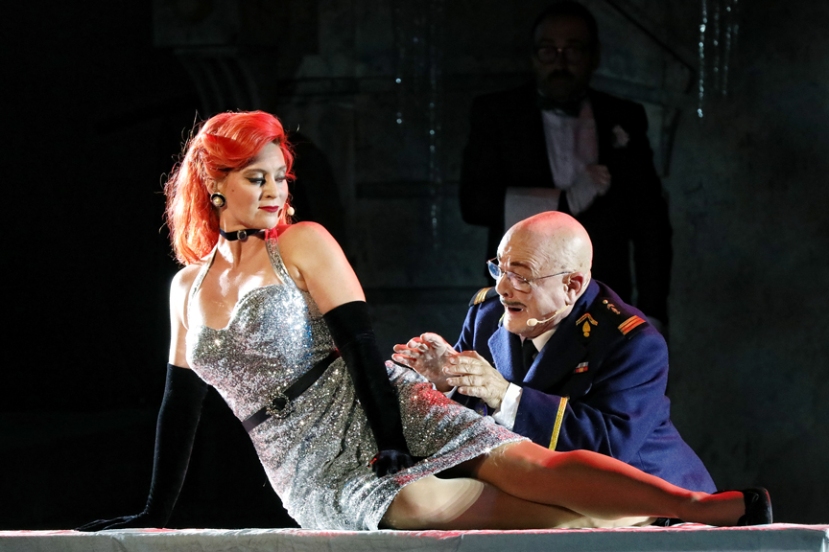 Having frequently been engaged as revival director, Morton steps up to the directing challenge with great flair and confidence. The additional scope for the audience to see the entrances and exits of characters works extremely well. To give just one example, as his friends depart for Cafe Momus, Rodolfo’s decision to stay and work a few minutes longer comes just as he happens to see Mimì in the street, not even knowing she is about to stop by when she can’t light her cigarette.

A smattering of romantic couples bath in the magenta street light as Mimì and Rodolfo sing their great duet, “O soave fanciulla.” A single firework lights the sky at the conclusion of the duet,  with the traditional spectacular fireworks display coming just before interval, as the Christmas Eve street parade reaches its climax. A romantic air fills the stage again as Musetta sings “Quando me’n vo’,“ the cafe filled with couples actually waltzing to Musetta’s Waltz.

Instead of workers entering the city gates, act three opens with workers clearing debris from student riots in the street of the Latin Quarter. During interval, cranes deposit burnt out cars, one of which houses Mimì and Rodolfo as they huddle together to escape the cold and sort out their relationship. Another feature of interval is the copious amounts of “snow” that fall on the audience. Bring a cloth to wipe your seat and wear sensible shoes! 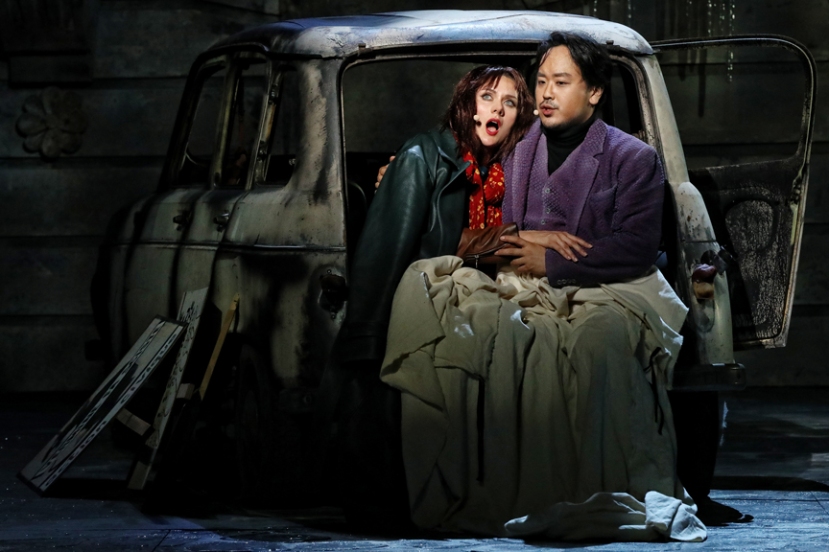 Above all the spectacle, of which there is plenty, Morton cultivates a tangible, authentic sense of camaraderie amongst the friends, and delivers a final scene that is genuinely moving.

Maestro Brian Castles-Onion is as much an installation in the Handa Opera series as the fireworks and the lavish on-site catering. Presiding over a mighty orchestra, Castles-Onion inspires a wonderfully lush performance from the assembled musicians, achieving the additional (well practised) miracle of maintaining perfect time with the principals and chorus despite being out of sight.

Sound designer Tony David Cray continues to produce crisp, clear sound. Vocals and instrumentals are very well balanced, and with many of the singers there is a sense of resonance, which is the usual casualty of amplification. Purists will still prefer acoustic music inside an opera house, but Cray’s work achieves the best result possible in the outdoors. 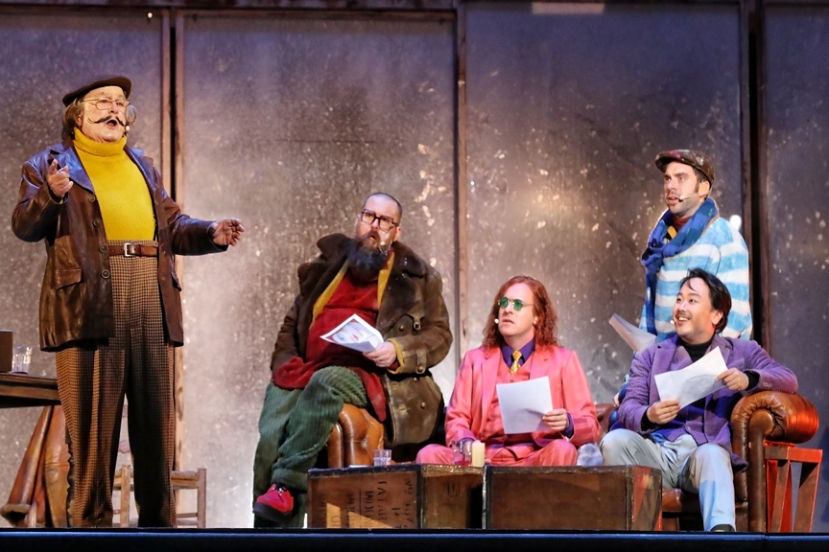 Casting this year is impeccable, with impressive visiting artists and a couple of breakout performances from local artists.

As Rodolfo, South Korean tenor Ho-Yoon Chung sings with unwavering intensity, handling high notes with steely strength. Chung imparts a romantic tone, although his vocal expression when Rodolfo is distressed in act three remains a little too powerful. Chung’s acting is a significant aspect of the impact of the climactic tragedy.

When Romanian soprano Iulia Maria Dan first sings, the result is a surprise in that her rich, voluptuous vocal tone is at odds with her delicate appearance (which, it must be noted, is related to her portrayal of Mimì). Dan produces a glorious sound, and is very well matched with Chung. Both singers suffer just slightly from the forward placement of their voices in the sound design, but their talent shines through regardless. The prospect of hearing these singers in an opera house is a tantalising prospect indeed. 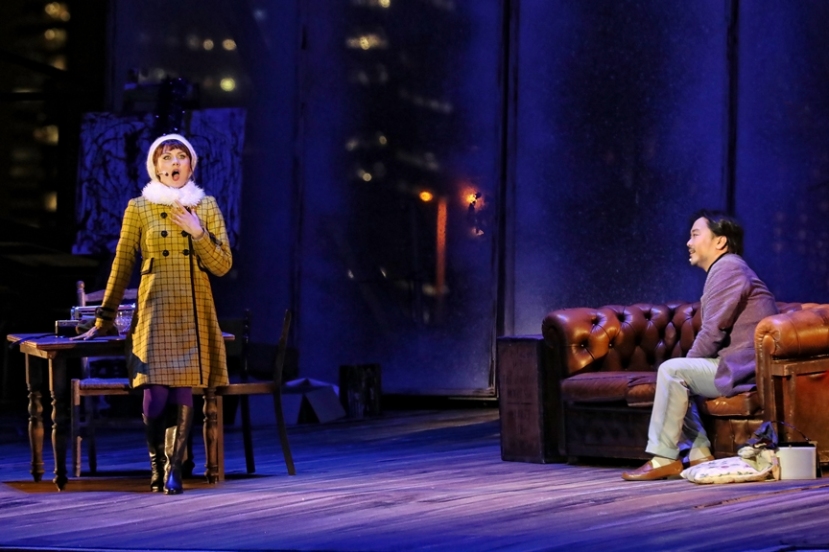 Australian singers Julie Lea Goodwin and Samuel Dundas enjoy terrific chemistry as bickering lovers Musetta and Marcello, both delivering performances that take their career trajectory to the next level.

Soprano Goodwin is a delight to watch as the saucy Musetta, playing with the sexual power the character wields. Goodwin is well served by the decision to dress her naturally in the final scene; this realism greatly heightens Musetta’s role in the drama.

Popular baritone Dundas completes the journey from Young Artist to true leading man, delivering a magnetic, involving performance. Of all the singers, Dundas’ voice seems best suited to the microphones, resulting in his vocals being the most impressive in a cast of highly capable singers.

Christopher Hillier is unrecognisable as Schaunard, and his talent and experience result in a warm, gently humorous characterisation. Richard Anderson grounds the fanciful set of artists with his serious Colline. Setting out to sell his coat (which he was seen dancing with during Musetta’s Waltz), Anderson gives a touching, magnificently sing rendition of “Vecchia zimarra.”

It seems that John Bolton Wood has been playing the dual roles of landlord Benoit and wealthy patron Alcindoro as long as I have been attending the opera. Alcindoro is reimagined here as chief of police, allowing he and Musetta to make a grand entrance to the Cafe Momus by police van. Bolton Wood not only brings a touch of class, but also knows how to sell character to a 3000-strong crowd, and his work is as engaging as ever here. 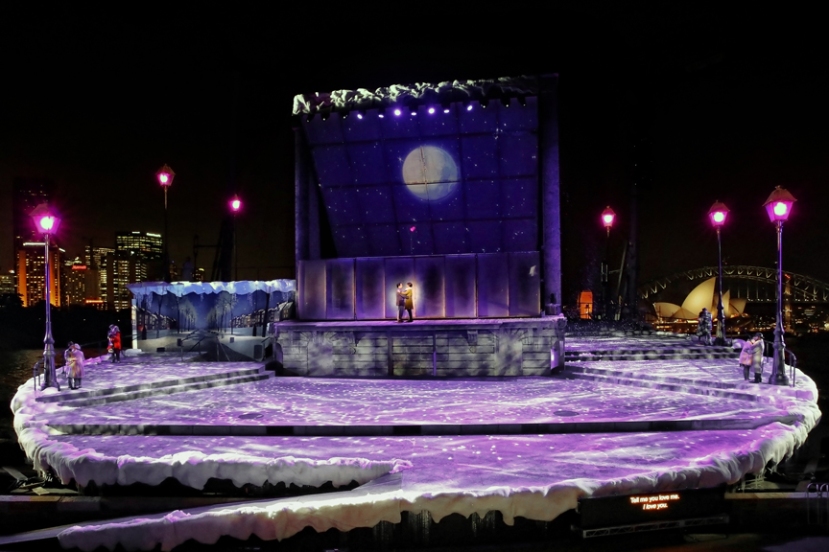 Handa Opera on Sydney Harbour is a truly unique event on the world opera calendar. In Europe, audience members would travel miles to enjoy such an event, and yet here this is on our doorstep. La Bohème is quite possibly the ultimate opera for newcomers, and this production makes the work even more accessible and enjoyable. Attendance is recommended for aficionados and newcomers alike.