The wintry Russian setting and grand Tchaikovsky score prove an ideal fit for The Imperial Ice Stars, whose revived production of Swan Lake on Iceeffortlessly integrates the spectacle of ice skating with the beloved fairytale ballet.

The crossover of art forms is something of a risk, as ballet purists may resent the inclusion of ice-skating, and skating devotees may have no interest in the fairytale story and classical music. The success of the combination comes down to the confidence with which the best aspects of each of the two elements have been blended, creating an entertainment that earns the evergreen catchphrase “something for everyone.”

Having enjoyed great success with the original 2006 production of Swan Lake on Ice, this current Australian tour sees the launch of a newly revised staging. Inspired by research into Tchaikovsky’s original plans for the ballet Swan Lake, artistic director Tony Mercer retains the dual performers for Odette and Odile. The happy ending of this version also marks a point of departure from traditional stagings of the ballet.

Working with musical arranger Tim A. Duncan, Mercer has streamlined the work into 130 minutes (including interval), neatly and vividly incorporating all elements of the usual story. Mercer shows a strong sense of theatricality in telling the story clearly, creating engaging characters and building up the action gradually. Avoiding the temptation to unleash all manner of ice-skating tricks and stunts, such aspects are placed judiciously throughout the evening for maximal impact.

About to turn 21, Prince Siegfried shows little interest in the women presented by his mother, the Queen. Even Rothbart’s striking daughter Odile cannot attract the Prince. Leaving court to go hunting with best friend Benno, Siegfried falls passionately in love with Odette. At his grand birthday ball, Siegfried falls under the spell of Odile, leaving Odette under the curse of taking the form of a swan by day.

The curtain opens on Prince Siegfried (Bogdan Berezenko) and Benno (Stanislav Pertsov), and it is these two men who create much of the excitement in the performance. The taller of the pair, Berezenko characterises Siegfried as elegant and aloof, while Pertsov’s Benno is enthusiastic and showy in his movement. Berezenko impresses with extraordinary speed and number of his vertical spins.

Once the ensemble members have all entered for the Prince’s impromptu party, Mercer presents some lovely synchronised work. Brimming with talent, the tight company of 21 skaters plays a number of roles across the two acts, maintaining focus on character in addition to the concentration needed to skate at high speeds in a confined space.

Albina Gabueva’s costumes are an attractive mix of realism and practicality, capturing the period along with a healthy dose of theatricality. Women’s outfits mix a naturalistic bodice with lower layers of chiffon that flare out beautifully as the skater moves. 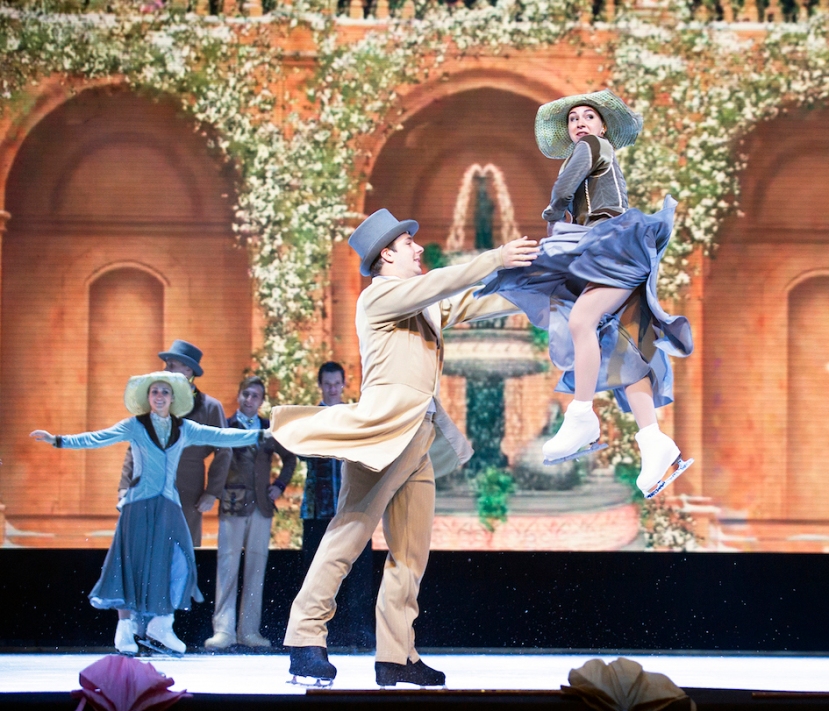 Eamon d’Arcy’s set design achieves mixed results. Good use is made of the large rear LCD screen to show subtly animated settings. The side and overheads panels of forest make sense in the lake scenes but are well out of place in the castle scenes.

As Odette (the white swan), Olga Sharutenko creates a contrasting character, presenting a radiant, loving young woman. Sharutenko is blessed with some of the most spectacular sequences of the night. After the initial pas de deux between Siegfried and Odette, Sharutenko is clipped onto a wire and subsequently soars overhead, representing both Odette’s blossoming love and her daylight life as a swan. Blurring the lies between skating and ballet further, Sharutenko then appears in point shoes, supporting herself en pointeon the ice between lifts by Berezenko as Siegfried.

Experienced skater Sergei Lisev captures the driven malevolence of sorcerer Baron von Rothbart with great flair. The spectacular moves performed by Lisev are visually enhanced at two points by the use of fire; the floor of ice on fire is an unexpected sight indeed.

The depth of talent in the company is illustrated in the act two divertissements by the visiting international princesses and their attendants. Mercer distinguishes the various nationalities based on culture and on the particular skills of the skaters.

Further evidence of the incredible talents of the cast comes in an extended free form section after the bows, in which each dancer has the chance to show their specialty; this exciting segment really leaves the audience on a high.

A program of wholesome family entertainment, the season of Swan Lake on Ice is well placed for the school holidays.

Swan Lake on Ice plays at State Theatre, Arts Centre Melbourne until 8 July 2018, before touring to Wollongong, Adelaide and Sydney.