In a mighty achievement, Victorian Opera presents an epic evening of magnificent music as they return Rossini’s William Tell to the Australian stage after some 140 years. 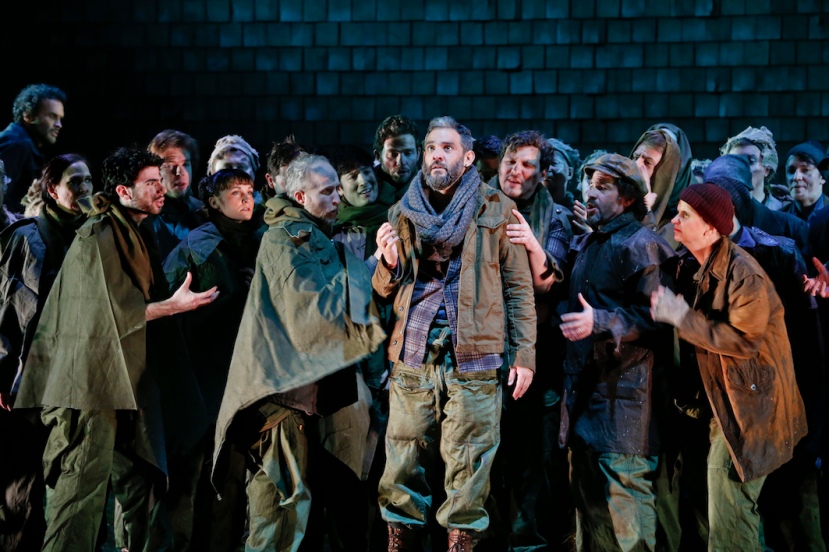 Working on a scale beyond their regular remit, Victorian Opera’s success with William Tell demonstrates the results of visionary leadership and artistic confidence. Everything here is super-sized: additional players join Orchestra Victoria, singers from University of Melbourne faculty of Fine Arts and Music boost the chorus, international guests sing alongside local lead performers, and the grand Palais Theatre is Melbourne largest.

Written for the grandeur of Paris Opera in 1829, Rossini’s final opera contains around five hours of music. Victorian Opera’s artistic director Richard Mills has worked with director Rodula Gaitanou to fashion a far more manageable version with running time of 195 minutes (including interval). Once requisite, the ballets are now excised. The piece stands with such cohesive narrative and musicality that this could easily be the definitive version of the opera.

Lack of familiarity with William Tell proves no impediment to audience enjoyment. Attention is grabbed by the very famous fourth section of the overture, and an evening of melodious, mature music unfolds. Over and above maestro Mills’ exacting work with Orchestra Victoria, and the splendid contribution of several very fine instrumental soloists, the work of the chorus is a sterling feature of the opera. Under the leadership of Mills and Victorian Opera head of music Phoebe Briggs, the unified chorus performs some of the evening’s most beautiful and stirring music to glorious effect.

While Gaitanou’s direction keeps storytelling clear and forthright, time taken by audience members to become familiar with the characters and synopsis is rewarded by greater ease in following the action. With a central theme of the love between father and son, key developments include Arnold Melcthal’s choice of duty over romantic love following the execution of his father, and the iconic scene in which William Tell is forced to fire an arrow into an apple on his son’s head.

Originally set in the 13thcentury, the work is reimagined here to occupied Switzerland in a dystopian future, where the invaders are a technologically superior force. This description may potentially sound off-putting to opera purists, yet the conceit works quite naturally. Swiss villagers are dressed simply in warm layers, while the invaders look somewhat more futuristic with shiny metal headwear. Tell’s weapon of choice is updated from bow and arrow to crossbow, but it does seem odd that no one else (apart from his son, Jemmy) uses arrows. The invaders have pistols, but the villagers later arm themselves with rifles, so the invaders are, perhaps, not all that technologically superior.

Esther Marie Hayes’ costumes form part of the storytelling when all men strip off their tops and change into military garb as a sign of their allegiance to the cause. Likewise, Princess Mathilde later removes her gorgeous fur-trimmed frock coat to show solidarity with the rebels in uniform.

In a wise budgeting decision, the company has placed scenic design on a low level of importance. Simon Corder has furnished the stage with two hills of green turf and a rear textured backdrop of Alps. The design is effectively evocative of the story’s setting, versatile across the four acts and raked so that the ample chorus may be easily seen. Corder’s lighting creates atmosphere and draws the eye to key characters. Representation of lightning in the storm is very effective.

Leading an exceptionally strong cast is Argentinian baritone Armando Noguera. Styled like a George Clooney-esque movie hero, Noguera matches the look with heroic vocal tone and a charismatic stage presence. Enhancing the beauty of the music with well-controlled dynamics, Noguera shows the vulnerability beneath the hero, particularly in “Sois immobile,” as Tell sings to his son before possibly killing him.

Act two is the heart of the opera, and contrasts the big choral finish of act one with noble princess Mathilde in a quietly contemplative mood. Swedish soprano Gisela Stille is in divine voice as Mathilde, filling the cavernous auditorium with her golden, gently voluptuous vocal tones. Stille brings a serenity and inner focus to Mathilde, striking a contrast with the rousing heroics of all the male characters. A principal at Royal Opera Copenhagen, this appearance is presumed to be Stille’s Australian debut; full credit to Victorian Opera for providing the chance to hear such a wonderful voice.

Mathilde shares a secret love with Arnold Melcthal, who rescued her from an avalanche. While it is far from politically correct to refer to any actor’s appearance, mention must be made of the transformation achieved over the past year or so by tenor Carlos E. Bárcenas. Looking younger now than when first seen around 10 years ago, Bárcenas appears to have lost almost half his body weight. Once quite a static performer, to see Bárcenas dashing up and down the Swiss Alps is to see a singer who has now made their mark as a true leading man. More importantly, Bárcenas’ singing of the fiendishly challenging role is a thrill to hear, with high notes ringing out with clarion strength. On opening night, Bárcenas’ voice seemed to tire just slightly at the end of “Amis, amis, secondez ma vengeance”but he was back at full power for his final scene.

Bárcenas and Stille provide some of the evening’s most lovely singing in their act two duet “Oui, vous l’arrachez à mon âme.”

Italian bass Paolo Pecchioli plays the villainous Gesler with great gusto. With only a brief appearance in act one, Gesler’s true malevolence is most strongly seen in act three, when he forces the villagers to venerate his statue. When Tell and son refuse, Gesler concocts the revenge of Tell firing an arrow into an apple on his son’s head. With metal headplate slightly obscuring his face, Pecchioli pours all the character into his rich bass voice, highlighting the darkest colours of his vocals to represent Gesler’s black heart.

It may be difficult to be recognise illustrious bass Teddy Tahu Rhodes in hermit-like bedraggled long grey hair and beard, but as soon as the first sonorous note pours forth there is no doubt to the singer’s identity. Making a welcome Melbourne stage return, Rhodes’ mighty bass voice powers through the space for an all too brief appearance as the ill-fated Melcthal, father of Arnold. 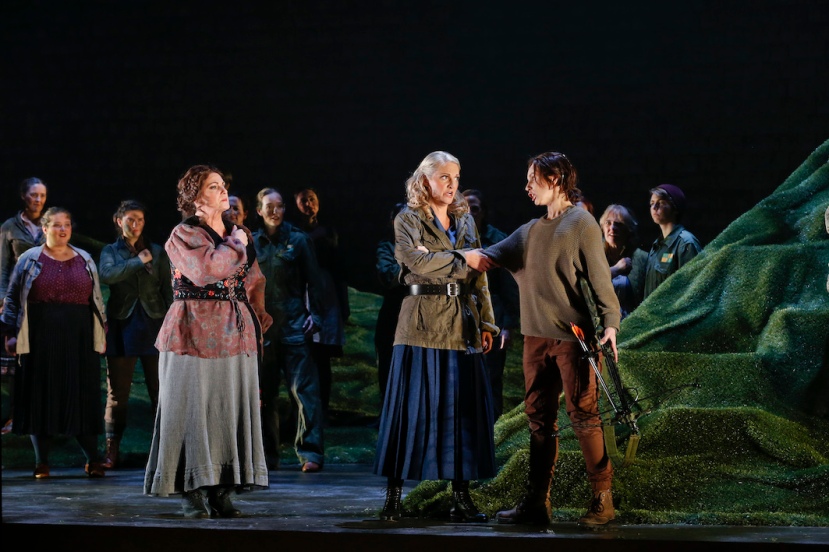 A production to be cherished and celebrated,William Tell leaves the audience hoping for more of the same from Victorian Opera in the years to come.

The William Tell program can be read online.