An extraordinary cast and an intelligent staging combine for a wonderful season of Adriana Lecouvreur at the Met. 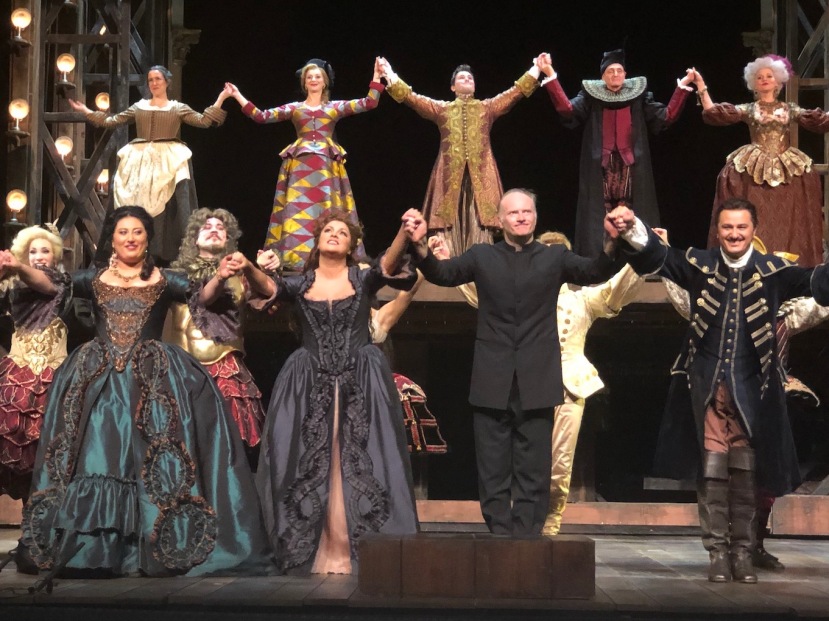 Acclaimed on the stage, famed actress Adriana Lecouvreur (Netrebko) nonetheless experiences her share of jealousy and insecurity off stage. In love with the dashing Maurizio (Beczala), Adriana has quite the rival in the Princess de Bouillon (Rachvelishvili), who eventually dispatches the actress with a poisoned bunch of violets. 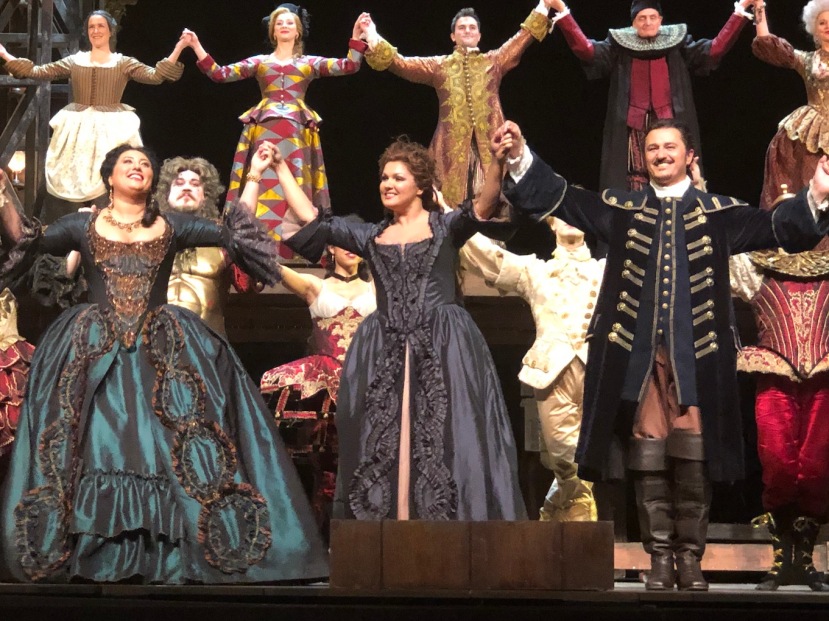 Created by highly respected director David McVicar for Royal Opera in 2010, the premiere season of this new co-production stands apart from the saturated colour and fanciful styling of recent new Met productions such as Cendrillon, La Traviata and Samson et Delilah. The new Adriana Lecouvreur can still be said to be stylised, yet at its heart there is a vivid sense of realism, supported by myriad period details.

Set designer Charles Edwards has crafted a massive, operational baroque theatre, which sits proudly upon the mighty Met Opera stage. The theatre remains in place for all four acts, given a facade to represent the villa in act two, and set up for a gala private event in act three. Acts one and four are set “backstage,” with actors and crew rushing about as though they were in an operatic equivalent of 42nd Street.

Maestro Gianandrea Noseda helms a lively musical performance, conducting the Metropolitan Opera Orchestra with passionate drive. Standing high, Noseda encourages the players to give their all for the big moments, also giving his attention to cueing the singers. While Cilea’s score is like a series of musical scenes in search of an aria, Noseda brings out the full colour of the music. Act three ballet “Judgement of Paris” is a lovely highlight for the orchestra.

Netrebko is blessed with the opera’s best aria, which comes very early in the night. Following a worthy reveal, in which the curtain of Adriana’s dressing room is slowly pulled back, Netrebko gives a magnificent rendition “Io son l’umile ancella,” which is the actress’ humble reply to a compliment. Netrebko’s dynamics are finely calibrated, a quality particularly noticeable in Adriana’s exquisite death scene.

Making a strong first impression at the top of act two, Rachvelishvili goes on to give a highly memorable performance, confidently demonstrating why her rise to prominence has been so fast and so well deserved.

A singer of enormous character, Maestri’s status as one the Met’s most beloved baritones is felt all the more strongly given that his role, the stage manager Michonnet, suffers from a hopelessly unrequited love for Adriana. Michonnet comes through for Adriana in terms of generosity and affection, earning even more audience love for Maestri.

Adriana Lecouvreur is an operatic experience that is worthy of the Met Opera stage in every regard.

The Adriana Lecouvreur program can be read online.