The third in the trilogy of new productions of Mozart/da Ponte operas commissioned from McVicar by Opera Australia, this final instalment was presented in Sydney in 2016. Melbourne’s long wait has been rewarded with a dreamy cast, with the rather lavish production looking altogether splendid on the grand State Theatre stage.

As with McVicar’s two previous productions, Don Giovanni and The Marriage of Figaro, this new Così fan tutte is seen in a concept that is highly respectful to the original and yet glows with fresh new life. Welcome moments of comedy spring from the characters, each of whom is portrayed in an authentically human manner. The narrative may be slender, but the tender emotion and stirring pathos in da Ponte’s libretto are mined for full impact.

Overhearing two soldiers boasting of the faithfulness of their sweethearts, Don Alfonso makes a bet that the girls will not be able to resist the attention of the two men if they pretend to leave for war and then return in disguise. With the ending of the opera open to artistic interpretation, McVicar has boldly avoided a pat happy ending by providing a more impactful and thought-provoking romantic finale.

Bringing McVicar’s early 1900s vision to life, designer Moritz Junge presents the relaxed decadence of sun kissed Naples in blissful pre-war Italy. The soldiers relax in a well-appointed gentleman’s club before visiting their sweethearts at their charming villa by the sparkling Bay of Naples. The addition and removal of a single wall delineates the scene between interior and exterior scenes as the action gently unfolds.

The officer’s uniforms are crisp and smart without being overly showy. Liveried footmen add a touch of old world class. Junge’s cleverest touch is having the women in simple attire with completely natural hairstyles; this serves to humanise the women rather than have them as caricatures. Even the men’s Albanian disguises are respectfully conceived rather than floridly overblown, as can often be the case with this opera.

It would be nice to think that the presence of a female conductor could pass without comment, but the rarity of this occurrence makes Keri-Lynn Wilson’s work all the more notable. Wilson conducts Orchestra Victoria with crisp precision, keeping tempi crackling along at a smart pace, beginning with the delightful call and answer of the woodwind in the overture. Recitative passages have a warm sense of musicality, aided by excellent work from Siro Battaglin on the Fortepiano.

Man in Chair’s 2015 review of The Marriage of Figaro contained the following comment: “Longtime company member and Mozart specialist Taryn Fiebig shines again in this second Mozart/da Ponte presentation. With a similarly lovely performance in Così fan tutte, she may end up walking away with the entire series.” It is pleasing to note, almost four years later, that this prediction has come to fruition, and Fiebig (as Despina) has indeed proved herself to be MVP of the entire trilogy. It is not just that Mozart’s lovely music suits her golden voice, it is the way that Fiebig’s wide-eyed playing style perfectly suits McVicar’s character-driven comedy, with the additional bonus of Fiebig’s deft portrayal of simmering vulnerability beneath the outward confidence.

Following her charming performance as the Countess in The Marriage of Figaro, Jane Ede makes a most impressive role debut as Fiordiligi. Her expressive face conveying a myriad of swirling emotions, Ede embraces the realism of the role, delivering lovely singing from her very first note. Exquisitely sung, Fiordiligi’s act two aria “Per pietà, ben mio, perdona” is arguably the emotional highpoint of the evening, bolstered by Ede’s highly personal connection with the audience.

Emerging mezzo-soprano Anna Dowsley is a winsome Dorabella, looking every bit the precocious younger sister of Ede’s Fiordiligi. Dowsley brings tender expression to her vocal performance, again supporting the vision of the characters as real human beings. Dowsley and Ede’s voices blend ever so sweetly, making truly beautiful music in their duets. 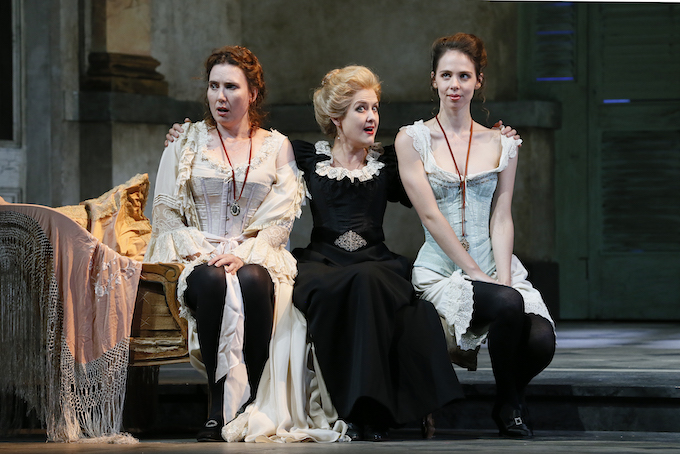 Bulgarian tenor Pavel Petrov makes a memorable Australian debut, singing the role of Ferrando with a sumptuous and thrilling tone. Baritone Samuel Dundas is perfectly cast as the dashing Gugliemo, underpinning the young man’s bravado with a suitable degree of self-doubt. Dundas’ vocal performance is, as ever, a well-tempered mix of strength, splendour and sensitivity. 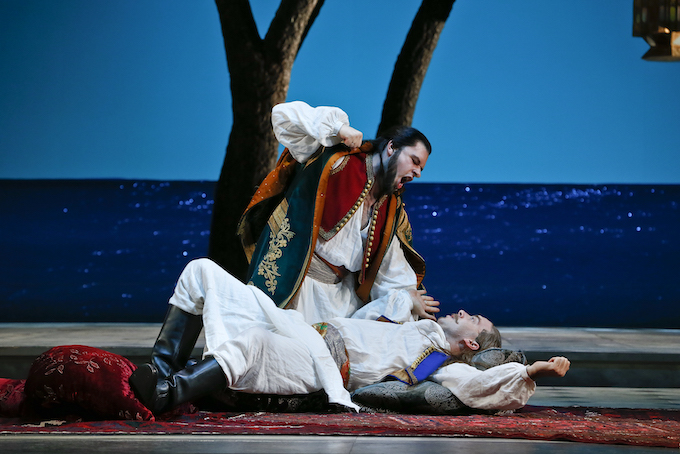 The sterling combination of production and music make the all too brief season of Così fan tutte one that opera lovers are highly recommended to attend.

Solo opera goers can enjoy Così fan tutte with like-minded arts lovers on 23 May 2019 as part of Opera Australia’s new Opera for One program.