Adventurous opera lovers of Melbourne were treated to a one-night-only concert of 1926 German opera Jonny Strikes Up!, giving the work its long overdue Australian premiere.

Hailed as the epitome of the fleeting opera genre known as zeitoper, Ernst Krenek’s Jonny Strikes Up! (Jonny Spielt Auf) characteristically incorporates city life, technology and jazz music. Such works, associated with Weimar Germany, did not survive the Nazi era; in its day, however, Jonny Strikes Up! was wildly popular across Europe, and premiered at New York’s Metropolitan Opera in 1929. The absence of any issue related to title character Jonny being a man of colour gave America an early cultural lesson in racial integration.

Championed by maestro Peter Tregear, Jonny Strikes Up! received a stylishly produced concert staging, in which meticulous preparation resulted in excellent musical performances from the orchestra and cast. With the sizeable orchestra filling almost every square inch of the stage, costumed singers stood downstage while the chorus, when required, stood at audience level in front of the stage. Overhead, a large screen displayed atmospheric images of the elegant era, using a charming art deco font for title cards that gave the tongue-in-cheek feel of a silent movie.

Composed at a time when classical music was part of the popular realm, a key feature of Krenek’s score is the successful interweaving of styles. Traditional operatic music is heard as part of composer Max’s work, as sung by his new love, Anita. Moving to Berlin, the couple encounters cosmopolitan life, later hearing jazz, as conducted and played by band leader Jonny, in Paris.

Krenek’s music for vocalists may not be particularly melodic, but the orchestral interludes of his score are real gems, conjuring vivid images of the bustle of city life, the solemnity of nature and the infectious sophistication of jazz. Conducting a large orchestra of young musicians associated with The Orchestra Project, Tregear delivered a precise, well controlled performance of the score. Musicians and singers alike performed with steady confidence, bringing the heretofore little-known work to life.

The storyline of Jonny Strikes Up! contains some nonsensical aspects (although possibly no more than most operas). It is not clear how opera singer Anita came to be lost on a glacier, and the importance of a banjo in her opera performance is another mystery. The significance of the ring, passed from violin virtuoso Daniello to hotel maid Yvonne to give Max, is not easy to glean, and Daniello’s climactic death by train brought a wave of giggles across the audience. The central love story between Max and Anita loses a degree of grandeur with the lack of traditional arias and duets. In a lovely transcendental moment, Max communes with nature, the female chorus providing the voice of the glacier that convinces Max to go on with life. 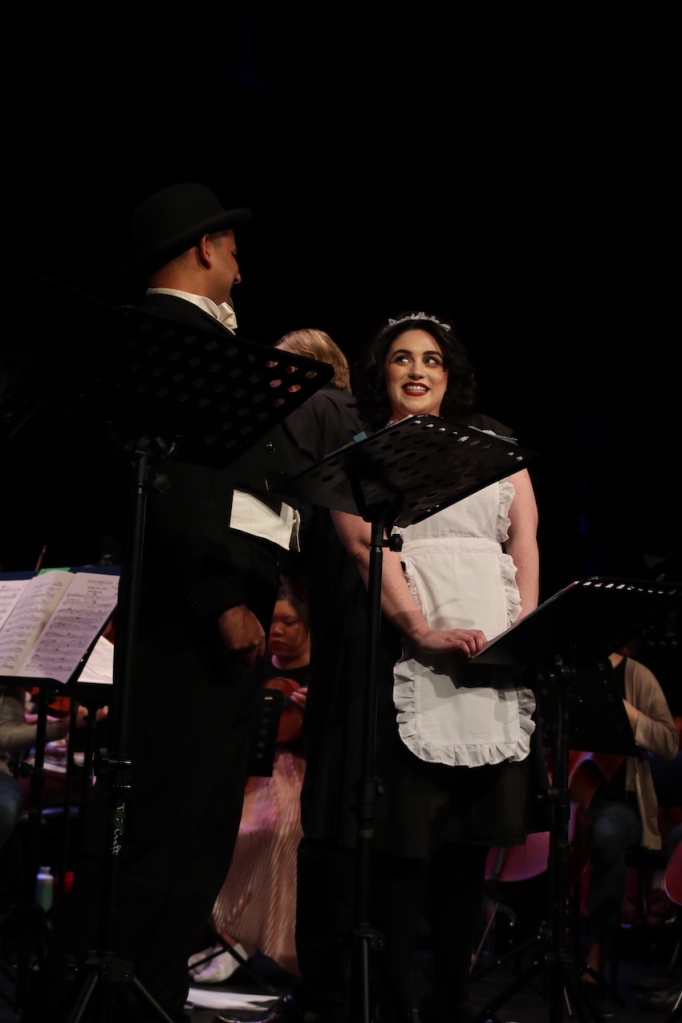 Jonny Strikes Up! was sung in English, with Krenek’s libretto translated by noted English director and lyricist Jeremy Sams. Although clear diction from the singers allowed the relatively simple text to be heard clearly, the provision of English surtitles would have been an asset, especially given the lack of familiarity of the work. This would have also helped at the occasional moments when lush playing from the orchestra swamped the singers.

The concert performance achieved an impressively cohesive style, benefitting from input from directorial advisor Greg Carroll. In line with the vintage footage on screen, the singers primarily work black and white, with a clear highlight being Anita’s black flapper dress with metallic embroidery. 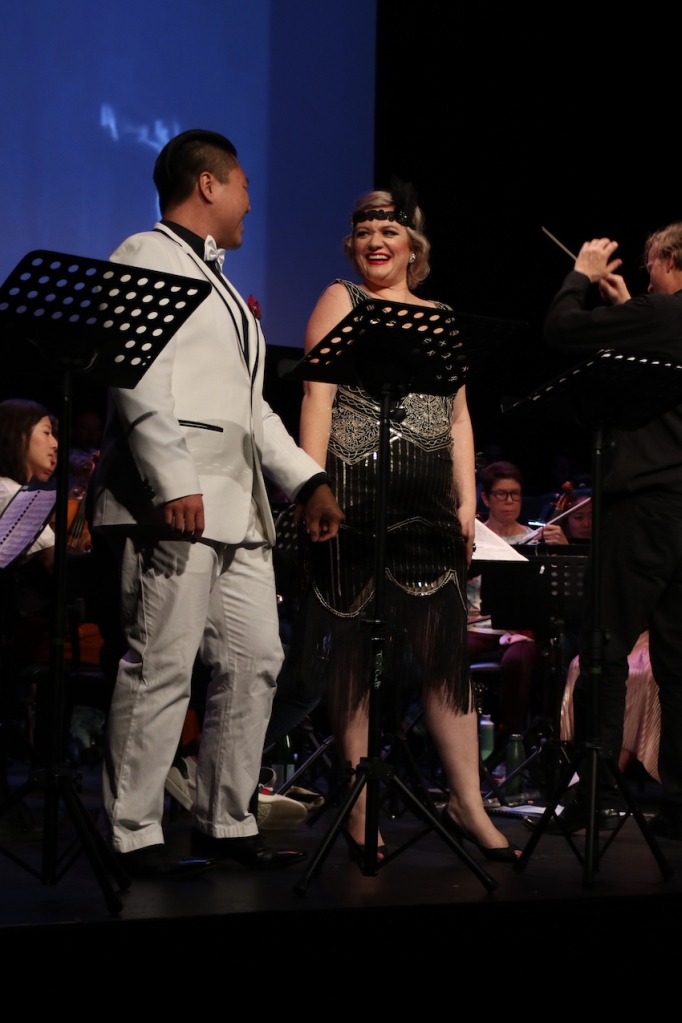 Golden soprano Lee Abrahmsen starred as mountain climbing, banjo playing opera singer Anita, elevating the music with luscious vocal warmth and crystalline high notes. Believably generating chemistry with all men who came to fall under Anita’s spell, Abrahmsen cemented her status yet again as Melbourne’s soprano of choice, also illustrating her particular gift for performing new work with a confidence and innate musicality that most singers can only achieve when performing time-honoured classics.

Replacing advertised star Alexander Lewis, the role of Max was sung by Scottish-born tenor Fraser Findlay. Given some of the driest passages, in which Max pondered life and love, Findlay brought a noble heart to the role, singing with unblemished purity of tone.

Rising soprano Rebecca Rashleigh delivered another quality supporting performance, bringing abundant verve to the role of saucy hotel maid Yvonne. Rashleigh’s clear musical talent, evidently supported by very thorough preparation, allowed her to focus on the beauty of her singing and the sparkle of the character.

Charming baritone Shoumendu Schornikow gave band leader Jonny the requisite twinkle, creating an intriguing antihero who is technically a thief yet too much of a charmer for this to really matter. Schornikow sang the role with ease, gracing the stage with his magnetic presence.

Local tenor Raphael Wong was luxury casting as vain violin virtuoso Daniello, singing the role with sumptuous vocal tone and elevating the character’s arc above that of a simple caricature.

The assembled chorus brought a welcome lift to their scenes, all singers working with poise and presence.

Jonny Strikes Up! was presented by IOpera in collaboration with The Orchestra Project at Athenaeum Theatre, Melbourne, 8pm Friday 4 October 2019.