Working at the very height of their powers, The Production Company rewards Melbourne for 21 years of love and support with a superlative production of epic 1999 Broadway musical Ragtime.

Man in Chair was fortunate enough to see both the spectacular original Broadway production and the scaled down 2009 revival. This Australian premiere of Ragtime finally gives the chance for a legion of local musical fans, who know and love the cast recording, to experience the full impact of the musical for themselves.

The vast scale of Ragtime has impeded the frequency of productions. The challenge of the multitude of scenes is solved by the concert staging with handsome black and white projections, while the challenge of finding the requisite breadth of talent in cast members is solved with breathtaking confidence by The Production Company at this very mature stage of their existence.

The extraordinary level of achievement in this superb production makes the imminent closure of The Production Company in 2020 all the more of a devastating blow.

Based on E.L. Doctorow’s 1975 novel, Ragtime ingeniously intertwines three societal groups of New York at the beginning of last century. The leisurely New Rochelle affluence of Mother and Father is soon to be disrupted by the lives of the African-American serving class and the wave of European immigrants seeking refuge. Issues of immigration, racial profiling, entrenched sexism and even gun control seem more relevant now than when the musical premiered twenty years ago. Hateful language is judiciously maintained in the script so as to give full power to the impact of the story.

Eclectic Broadway composers Stephen Flaherty and Lynn Ahrens provide a sumptuous score that is a close relation to Les Misérables for sheer musical beauty (and frequency of power ballads). Flaherty makes brilliant use of leitmotifs to subtly support audience absorption of the plethora of characters. Terrence McNally’s book deftly telescopes an abundance of character motivation by having the characters frequently and simply address the audience in third person. Ragtime has a far more sophisticated storyline than a great many musicals, weaving seemingly disparate threads into a cohesive and deeply moving tapestry.

Director Roger Hodgman embraces the large playing space of the State Theatre, giving the story and its characters room to breathe. The story unfolds with a seamless flow, and Hodgman’s empathetic direction ensures that the audience is moved to anger, joy and tears by the engaging characters.

Choreographer Dana Jolly adds to the sense of pageantry with crisp choreography. A highlight of Jolly’s work comes in “Sarah Brown Eyes,” in which the choreography clearly conveys the fact that the song is a mournful dream.

Maestro Guy Noble leads The Production Company Orchestra in a particularly splendid performance. The score calls for a wide range of styles, from ragtime to traditional Broadway to Eastern European, and Noble delivers the full colour of these styles with consummate flair.

Set designer Christina Smith provides a sturdy pair of stairs with a walkway over the orchestra. Clever use is made of the lower portions of the stairs to create the bleachers at the baseball game attended by Father and his Little Boy. Well-chosen period images on the large overhead LCD screen add significantly to the atmosphere whilst also capably supporting the storytelling. 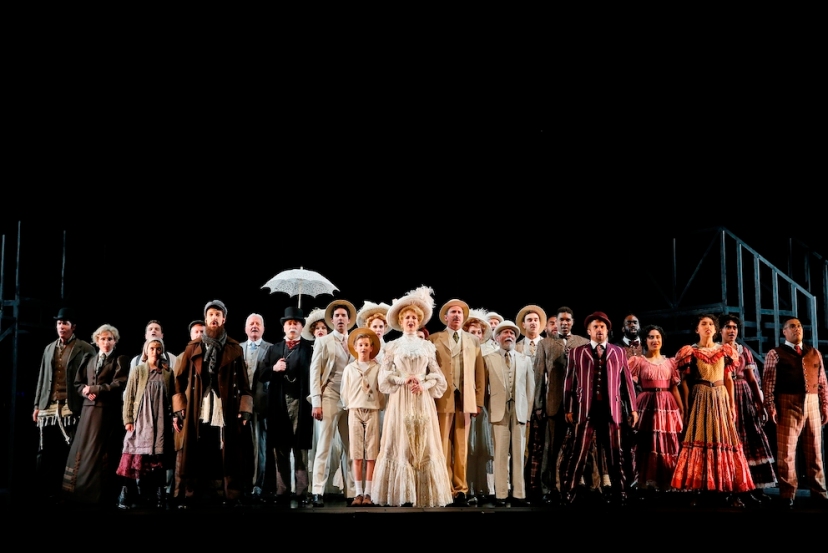 A key achievement of The Production Company has been the spotlighting of new talent, a tradition that continues with Georgina Hopson’s breakout performance as Mother. Hopson portrays a woman who has her place and yet acts with noble bravery and tender compassion to counter injustice. Hopson’s singing is divine, and her performance of Mother’s 11 o’clock number “Back to Before” is unforgettable.

At home on the world musical theatre and opera stage, Alexander Lewis makes a welcome debut at The Production Company. A supremely gifted actor, Lewis imbues Tateh with integrity and spirit, also singing the role with pristine flair. Lewis and Hopson’s charming duet “Our Children” is a stirring musical highlight.

Kurt Kansley stars as Coalhouse Walker Jr, successfully taking the man from colourful jazz musician to dignified lover to embittered revolutionary. Rising star Chloé Zuel is a delight as dear Sarah, bringing the audience to her in a sweetly underplayed performance. Zuel and Kansley soar in “Wheels of a Dream,” as Sarah and Coalhouse dream of sharing a happy future.

Adam Murphy brings fresh life to Father, a traditional man whose weaknesses and foibles are in plain sight today. Finn Alexander captures the focus and heart of Mother’s Younger Brother, ensuring that the young man’s descent from privilege to rebellion is believable.

Strong character work comes from Sage Douglas as anarchist Emma Goldman, adding an amusing touch of self-deprecation to the woman’s drive and determination. The ensemble cast of featured roles is an embarrassment of riches, from veteran performers such as John O’May, Anton Berezin and John McTernan, to younger talents such as Louis Lucente, Mackenzie Dunn, Joti Gore and Matt Hamilton. Special mention goes to Ruva Ngwenya, who delivers stunning powerhouse vocals as Sarah’s Friend.

On opening night, Kempton Maloney, as Little Boy, worked with confident poise and boyish charm. Summer Hamilton, as Little Girl, has few lines, so much of Hamilton’s lovely work was in her expression and presence.

Ragtime is absolutely not to be missed.