A trailblazing experiment to be treasured, supported and admired, the live online season of Who’s Your Baghdaddy (or How I Started the Iraq War) is an imaginative blend of musical theatre prowess, devilish satire and technical wizardry. At this time when actors and audiences alike crave the return of live theatre, Who’s Your Baghdaddy is the closest experience to the real thing, performed live online each night by eight vibrant actors supported by an inspired creative team. The viewing experience benefits from audience familiarity with the multiple live stream concerts and play readings that have been seen across the past three months, but the added excitement of a live piece of musical theatre adds lashings of extra zing.

Social distancing is readily achieved by having each actor in a different room of the one house, with stage management and key creatives in a central hub.

The Iraq War may not seem ideal fodder for the musical theatre stage, and yet creators Marshall Paillet (music, book) and A. D. Penedo (lyrics, book) have found a canny framework in which to present a satirical look at what is basically a tragic series of misfires on a global scale. An AA-like support group meeting is reimagined here as a Zoom meeting, in which the assembled people share the significance of each of their roles in starting the Iraq War. 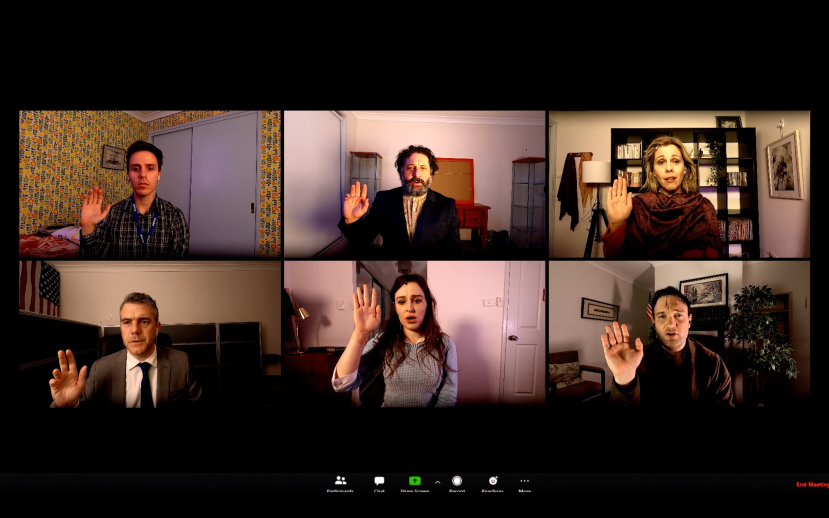 Whereas many a musical is content to end act one with the traditional “boy loses girl” twist, Who’s Your Baghdaddy dares to go to interval on the unforgettable tragedy of September 11, 2001. The gravity of this central piece of drama is given full weight by the clever writing, which conveys an inevitable arc from sunny superficiality to catastrophic consequences.

Director Neil Gooding perfectly picks up the tone of the writing, creating an atmosphere of energetic improvisation as the focus shifts around the group and the storytelling flits back and forth in time. Gooding’s vision for this online event is so well realised that it is hard to imagine the show working as effectively in a traditional theatre. The slick success of the staging is due in no small part to the work of technical director Michael Goodyear, who flips vision from actor to actor with extraordinarily nimble timing and wonderfully creative visual flair. The sound design of David Bergman blends the singing voices as beautifully as would be heard via a full sound desk in a theatre. Lighting, by Phoebe Pilcher, skilfully creates differing ambiance for the various characters, neatly changing vibe for the more fantastical sequences.

Musical director Steven Kreamer brings the jaunty, instantly accessible score purring to life. The cast members sing the heretofore unfamiliar music with supreme confidence; timing is tight and vocal harmonies are pristine. Leah Howard’s choreography elevates the work above the set of talking heads that generally characterise online performances. In a delicious touch, Gooding and Howard frequently have the cast members face inward or towards a key character, bringing to mind the much-loved opening credits of The Brady Bunch. 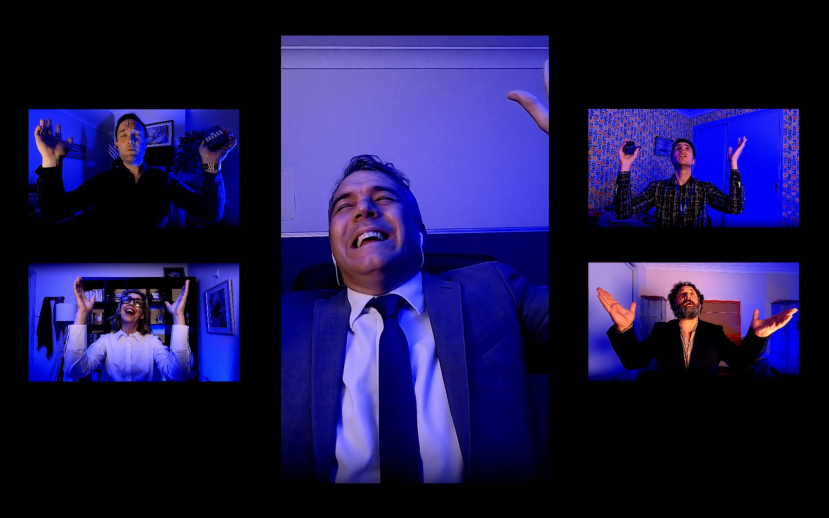 Working with impressive, entertaining dexterity, Blake Erickson (Man) and Katrina Retallick (Woman) each perform a dozen or so roles, sometimes switching between Isabel Hudson’s costumes with speed that defies the live performance. Retallick particularly shines in conveying the vapidity and vagary of American news reporters. Troy Sussman is so convincing as whistle-blower Curveball that he practically generates sympathy, or, at least, understanding, for the chain of fools who believe him. Phillip Lowe brings well measured class to unflappable CIA operative Tyler. While we suffer through this ongoing pandemic, it can only be hoped that there will be more creative ventures like this, providing a much-needed outlet for performers, directors and designers, not to mention welcome entertainment for audience members isolated at home. With ticket prices set at a very readily affordable level, viewing of Who’s Your Baghdaddy is highly recommended.

The opening night performance of Who’s Your Baghdaddy was dedicated to the memory of Michael Falzon.

Who’s Your Baghdaddy is performed and streamed live nightly at 7.30pm AEST until 28 June 2020.