No immersive visit to West End theatre is complete without sampling the offerings at London’s National Theatre on South Bank. Productions often sell out and queuing for two hours in the cold morning is so tedious so book in advance to see everything then hope for the best. This time around, three hits out of four is not bad at all.

What if Motel Kamzoil had been a filmmaker rather than a tailor?

A stellar creative team misfire here with an idea that sounds great in principle but falls short of its potential.

Playwright Nicholas Wright spins a tale of the dawn of cinema in Eastern Europe that degenerates in the final reel, so to speak, into a soapy mess.

Master Director Nicholas Hytner corrals the large ensemble effectively but allows the central love story to fall completely flat. Some blame must also go to Hytner for Anthony Sher’s unwatchable, over the top caricature of local businessman Jacob Bindel (think Tevye, if he actually was a rich man. And insufferable).

Prolific Set Designer Bob Crowley makes a fine contribution, creating a realistic set which then comes apart in later scenes to appear as if recreated in a Hollywood studio. The sky backdrop, sitting above beautifully built sets representing the shtetl, becomes the canvas to give the audience a clearer view whenever movies are shown throughout the story.

At the dawn of the twentieth century, young Motl Mendel (Darren Molony) quickly learns to work his deceased father’s camera and projector, with the whole town soon involved in the moving pictures business.

Paul Jesson is well grounded, if slightly modern in appearance for 1936, as Motl’s future self Maurice Montgomery. Sue Kelvin is warm and ebullient as Motl’s aunt Tsippa, joining the other 17 or so actors in creating a far more believable portrayal of Jewish villagers than nominal star Sher. 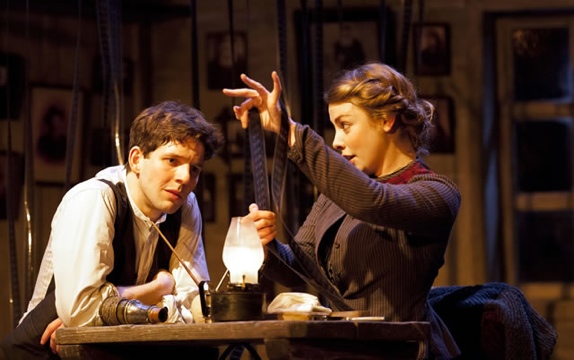 Molony is an attractive young performer who seems likeable enough but whose spark doesn’t cross the footlights. Motl’s romance with assistant Anna, Lauren O’Neill, is tepid at best, giving no impact to the melodramatic final stages of their story.

The few scenes where movie production really gets going are terrific but this is a dull affair overall.

Who knew Joseph Stalin could be so entertaining?

Man In Chair’s concerns over not knowing enough background to the scenario was swept away when it was soon became clear that the play was set in the era of Doctor Zhivago. Also, bringing extra enjoyment, an era when women wore their hair fetchingly styled in a marcel wave.

Turns out it’s actually true that in theatre in the square “nobody has a good seat”. A sterling effort from Director Nicholas Hytner keeps actors spinning to try to include all viewers, with more success coming from the fluid nature of the staging overall. A rather light input from Set Designer Bob Crowley sees a central table and chairs portray an apartment, doctor’s surgery, underground lair and so on. Scenes ebb and flow most effectively, particularly snippets of the plays within the play.

Foreshadowing is heavy, opening with a nightmare in which Stalin (Simon Russell Beale) chases playwright Mikhail Bulgakov (Alex Jennings) around his apartment, Looney Tunes-style, before capturing and crushing him.

When Vladimir (Mark Addy) of the Secret Police engages Bulgakov to write a surprise script for Stalin’s upcoming 60th birthday, Stalin enthusiastically takes over the task himself, assigning his usual state duties to Bulgakov. A sinister vein of humour runs through these scenes of collaboration, where the play Young Joseph seems to resemble a kind of Springtime for Stalin.

Bulgakov and his formerly miserable Comrades soon have fruit, coffee, hot water and other luxuries but at what cost? Bulgakov, assigned a car and driver, plus a doctor far more capable than his own morphine-addled hack, thrives and regains his health but quickly counts the cost of the decisions he has made on behalf of the dictator.

Jennings and Beale give true star turns as the collaborators, their scenes together crackling with the electricity of years of expertise. Beale’s plump, jolly Stalin seems altogether lovable on the surface were it not clear that a chilling killer is bubbling only just below the surface. Jennings keeps Bulgakov startled and driven, clear in the knowledge that the burgeoning luxury cannot possibly last.

Addy, known more for likable roles, uses this to also create a conflict between upbeat director of the play and ruthless secret police agent. Patrick Godfrey brings a sincere nobility to the long suffering comrade Vassily. 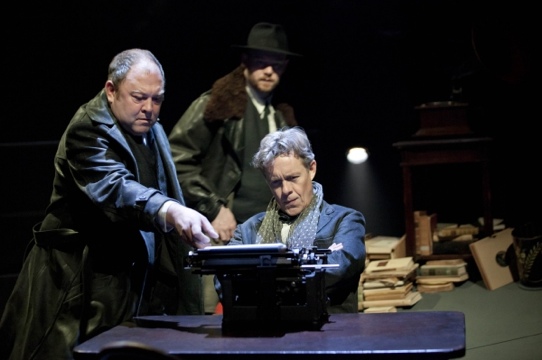 The large ensemble work seamlessly to create a range of characters and situations.

Music by George Fenton adds considerable effect to the atmosphere.

Collaborators is a thought-provoking and, given the serious focus, surprisingly entertaining play that will surely be seen in Australia next year.

This is the reason to see plays in London – big cast, big set, live music, speccy costumes. A first class production of a truly classic play.

Oliver Goldsmith’s 1773 comedy of manners, errors and romance has a delicious resonance today, all the more with the knowing wonks of inclusion given from actors to audience as if to say we are all in on the contrivance.

Not Bunburying but rather pursuing romance, London friends Marlow and Hastings visit Hardcastle manor having been hoodwinked by the maturity-challenged young master of the house Tony Lumpkin that it is an inn. The first of many misunderstandings, a slow boil of hilarity ensues on the way to an all-encompassing happy ending.

Impersonating a barmaid, the beautiful Kate Hardcastle (Katherine Kelly) “stoops to conquer” Marlow (Harry Hadden-Paton), a swell who is incapable of calmly conversing with women of his own breeding. Plummy Hastings (John Heffernan) hopes to elope with Kate’s cousin Costance (Cush Jumbo), along with her jewels. 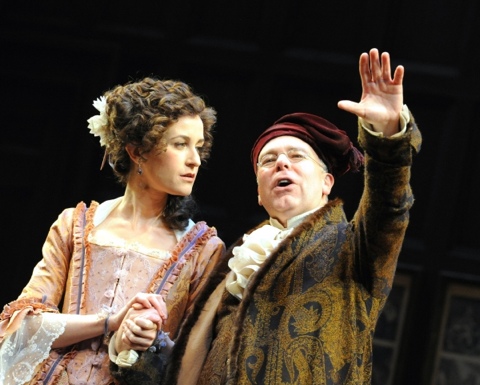 To watch Kelly (above) in action is to watch a star arrive on the London stage. Only one week off screens after five years on Coronation Street, RADA-trained Kelly is as arrestingly bewitching beauty who can say more with one look than most can say with a page of Shakespeare.

Hadden-Paton and Heffernan bounce off each other like real best friends, with Heffernan, ostensibly in a supporting role, threatening to steal the show such is the success of his jolly characterisation. Hadden-Paton perfectly delineates Marlow’s unbridled lust for servants and bashful humility around nobility.

David Fynn’s Tony is an adorably boisterous brat, never funnier than when pretending to woo Costance to appease his mama.

Most splendiferous of all is the fabulous achievement of Sophie Thompson (above) as Mrs Hardcastle. With the audience in her palm, Thompson’s airs and accents, not to mention her geriatric curtsy, are pure delight. Highlights included her pretense at familiarity with the fashions of London and her reading of Hasting’s letter in which she is, cruelly, referred to as a hag.

First time NT Director Jamie Lloyd has done a brilliant job with filling the jewel in the crown Olivier with visuals and sound. The fever pitch action is played at full voice, with the cast’s already expert nods and winks to the house sure to improve even further as the season progresses.

Chilly winter theatregoers are warmed by the inviting sight of the Hardcastle fireplace, positioned in a large wood-paneled wall ahead of a backdrop of misty trees. Mark Thompson’s grand set design revolves to reveal tavern The Three Pigeons then later drops into the stage for the spooky outdoor scene at Crackskull Common.

Five musicians are a luxury indeed. Ben and Max Ringham’s infectious music, which includes the cast, covers scene changes and gives the audience a chance to catch their breath from laughter.

This is a must see when it hits the cinema circuit in a couple of months. Or, even better, live if you have the chance.

Yet again a big cast, big set and live musicians. A brisk, expertly updated production of one of Shakespeare’s most complicated comedies.

The towering set is all the more amazing for being on the same stage that She Stoops to Conquer occupied only the night before. A trio of three-story units spin and glide into place, creating a range of locations including slums, red light district, stores and an upmarket apartment block. Visionary work by Bunny Christie.

Production values overall are high, with 23 actors joined by 4 onstage musicians (one of whom is elegantly named Simon Parrish). A chase sequence in act two involving all the cast, revolving stage and sets, overhead helicopter lights and ambulance (yes, an actual ambulance driven on the stage) is a spectacular high point to the ever escalating series of misunderstandings.

Set in current day London, the menagerie of characters are distinctly drawn, with the servant and master separated twins played by black men. Each Antipholus (Lenny Henry and Chris Jarman) is tall with shaved head and goatee while the Dromios (Lucian Msamati and Daniel Poyser) are short and pudgy with an afro.

Under Dominic Cooke’s direction, the comedy is played as deadly serious and is all the funnier for it. Stakes are high in the vicious underworld on show, with action barely pausing for breath for the speedy 130 minutes (including interval). The only weakness is fight scenes and physical comedy which do not stand up to superior work on display in current productions such as the Old Vic’s Noises Off. Having the ensemble sigh with satisfaction at the ultimate resolution of each plot point is a nice comic touch.

The four leads are uniformly strong, with Msamati scoring extra points for his well founded fear of the predatory European housekeeper. Claudia Blakley and Michelle Terry are a treat as the wife of Antipholus of Ephesus, think a young Gillian McKeith, and her bottle blonde Essex-style airhead sister. Amit Shah also gives a strong characterisation as Angelo, the frantically befuddled goldsmith.

Definitely worth considering at the upcoming cinema screenings. Shakespeare aficionados will thrill at the highly expressive, rapid fire delivery of the dialogue.