Photos do not do Bastille Opera House justice. Its clean design and epic scale dwarfing the audience members. Sightlines are incredibly clear in the well raked stalls, aided by the segmented dress circle and balcony. Sound floats beautifully from the wide, narrow orchestra pit. Views of Place de la Bastille from the foyers are grand indeed.

Marianne Fiset is a delicate, engaging Manon in this hit and miss, actually more miss than hit, staging of the romantic French classic.

The curtains opens to a massive bus terminal, complete with actual bus at one point, at which gathers an enormous chorus dressed in warm autumnal shades. Designs are initially mostly of the traditional period apart from some quite incongruous elements such as Lescaut and Guillot who appear as full blown spiky punks. This develops to the stage in act four where the whole ensemble have degenerated to punks in red, white and black and the bus terminal is in ruins. Along the way we have women dressed in garish citrus tones riding roller-skates at Saint-Sulpice.

After a hotel flies in for the second act, its front hinges down and its sides fold around from the back to create Manon and Lescaut’s little room. In a disappointing directorial choice, one of many, actors stray from the established space of the room and characters run on without using the door. Tension is effectively created during Des Gieux’s Dream Song as floating images illustrate his visions for he and Manon while approaching police wait in the background to capture him.

The final setting, where the tragic Manon is now seen desolate and exhausted, is actually quite a beautiful cloudscape (seen above in the curtain calls).

Giuseppe Filianoti scores with Des Grieux’s romantic aria “Ah! fuyez, douce image.” Fiset is more than admirable but it was very disappointing not to see the previously advertised Natalie Dessay.

Who knew Tchaikovsky was also a dab hand at writing operas?

The dramatically entertaining story from the point of view central protagonist Hermann (Vladimir Galouzine), a man tormented by the pursuit of love and wealth, now wasting in an asylum. His love of Lisa (Olga Guryakova) is destroyed by his lust for her grandmother the Countess’ secret for winning at cards.

The thread of insanity clear from the outset, action occurs around the lone set piece of Hermann’s bed, which doubles as the Countess’ death bed and even as the climactic gaming table. The institutional setting makes sense, but it certainly robs us of potentially more glorious scenes, such as the ‘masked ball’ which here just features three characters with some cloth wrapped around their eyes.

The back wall flies out, opening up the stage before interval at the arrival of the Countess to the ward. Hermann appears in regular clothes at the beginning of the second half but gradually everything returns to the asylum.

Under Coline Serrau’s direction, acting is nicely underplayed and, even with the altered setting, storytelling along the way is clear. One question that remains, perhaps deliberately, is whether Hermann was looking back on the events of the story or whether he was imagining it all. In the original synopsis both he and Lisa die but this did not seem to happen in this version.

Galouzine manages the huge tenor role with apparent ease, singing so as to break your heart. Guryakova is lovely, particularly in her gorgeous duet with Lisa’s friend Paulina (Varduhi Abrahamyan). Her final aria “I am worn out by grief” is quite magnificent.

The evening was, in fact, full of particularly beautiful arias and duets. One further that should be mentioned the Countess’ French song “Je crains de lui parler la nuit”, sung with spellbinding solemnity by Larissa Diadkova.

An enormous ensemble play other patients and the gentle tone of their singing is beautiful. The final pianissimo chorus is just amazing. The Paris Opera orchestra sound wonderful, particularly given the number of featured instrumental sections they are given to play.

A truly superb night of music despite an underwhelming staging.

Now this is more like it – an all star trio of leads in a production as spectacular as one could possibly desire.

Towering jagged, cracked stone ruins are the dramatic backdrop for Verdi’s classic tragedy. Opening with a carnivale, Rigoletto is carried on in a suitably ominous giant skull. The large male chorus are seen in crimson and purple, each as splendidly attired as if they were a lead.

If there is one technical complaint, it is that the atmospheric lighting is sometimes too dim to clearly see the performances. A case in point is Rigoletto’s important dramatic aria “Pari siamo!” which is staged in near darkness.

The term ‘pure’ is usually reserved for sopranos but in the case of Zelko Lucic’s glorious bass voice it the best description for the smooth, rich sound which comes forth without so much as a quaver or a rumble. Lucic effectively portrays Rigoletto’s love for his daughter and the pain of his constant torment by the men of court but did not seem to capture the full physical characterisation of the troubled jester. 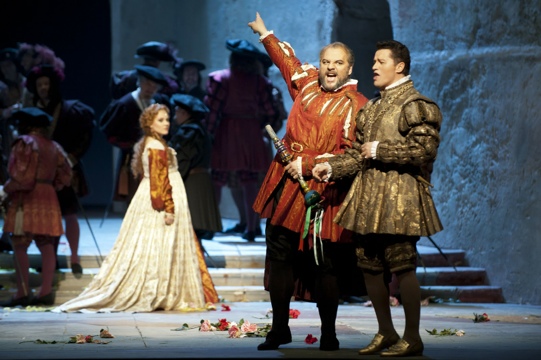 Piotr Beczala is in superb form, the beautiful sound of his magnificent tenor voice matched by his physical beauty. Beczala plays the Duke as living for pleasure and loving it, his open, expressive face reflecting the Duke’s passionate feelings for Gilda. If a highlight had to be selected it would be “Ella mi fu rapita!”. Beczala is a true leading man, and his continued international career is one to be followed closely.

To take nothing away from these male stars, shimmering highlight of the night was shooting star Nino Machaidze as the delicate Gilda. The gorgeous liquid quality of Machaidze’s soprano is sheer delight, her expression, dynamics and control at a standard usually in performers with many more years of experience. Her chemistry with both leading men is strong and she truly captures the audience’s hearts.

The act three quartet was a true high point, both in terms of the magnificent singing and also the multi-level staging.

This type of production is the reason to see opera in Europe.