All Shook Up mini-review

Not an official review per se but more the happy ramblings of a grateful audience member finally given the chance to see a show they have adored (on cd) for seven years.

And it turns out that All Shook Up makes a wonderful companion piece to this week’s pro premiere of Legally Blonde. Both musicals call for a company of triple threats, feature a cavalcade of catchy tunes and leave audiences high on the joy of musical theatre.

Lost, unfortunately, in 2005’s sea of jukebox musicals, All Shook Up has never achieved the love it deserves. In his cheeky, fun-filled book, based on Shakespeare’s Twelfth Night, bookwriter Joe di Pietro juggles no less than five lead couples, maintaining our focus and affection each of them over a highly enjoyable two and a half hours. 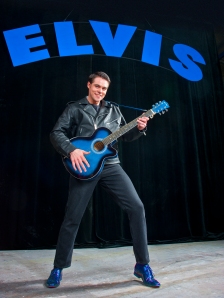 The mighty catalogue of Elvis Presley, king of rock ‘n’ roll, has been carefully mined to select a mixture of well loved and lesser known songs that service the story perfectly. The classic tracks are enhanced significantly by the stunning arrangements of orchestrators Michael Gibson and Stephen Oremus. Glorious act one finale “Can’t Help Falling in Love” is just one of the tracks to receive this special treatment.

Music Director Danny Forward has created an absolutely fabulous sound, both from the band and from the incredible vocal harmonies of the cast.

Director/choreographer Craig Wiltshire keeps energy at a fever pitch, highlighting the daffy silliness of the story and facilitating the cast’s portrayal of the quirky characters. Special mention must be made of Craig’s signature touch: covering set changes with even more non-stop dance.

Jonathan Guthrie-Jones gives yet another star turn as roving roustabout Chad, eschewing his clean cut, preppy look to play a lusty lothario. Jonathan’s characterisation is spot on, and his portrayal of Chad’s dilemma over liking new sidekick Ed (really Natalie) is just delicious. Jonathan’s singing is reliably excellent as well.

Melanie Ott adds another terrific performance to her bio as tomboy Natalie who masquerades (a la Twelfth Night) as Ed in a bid to get closer to the Chad. Melanie belts out the numbers as if they were written for her, and sparkles in the cheeky confusions of her gender bending disguise.

Tyler Hess channels Hugo Peabody, Bud Frump and every other musical nerd as Dennis, loser in love til the very end. Natasha Bassett serves up her breathtaking belt as the weary Sylvia, stopping the show with sensational act two power ballad “There’s Always Me.” Robert Harsley has fun, and has every male of a certain age onside, as newly re-energized widower Jim. Kim Anderson has a delectable drag queen vibe as misanthropic Mayor Matilda.

Overall standouts in the supporting cast are Clary Riven and Daniel Komesaroff (left) as young lovebirds Lorraine and Dean. Both are excellent singers and actors, and Clary in particular has a powerhouse voice that is a real thrill to hear.

The fact that the ensemble sings as well as they do and also dance up a storm is a feat that has to be seen, and heard, to be believed.

John Shelbourn’s set is as solid as one would expect from CLOC. Especially clever is way the pieces of the fun fair set fit together in so many arrangements. The bike and bus chase is hilarious. Chris White’s roller coaster backdrop is spectacular.

If there is a highlight of all the creative elements, it is the amazing costume design of Victoria Horne. The company go from drab brown, to brown with sequins, to a shimmering sea of blues, pinks and purples, all with more sequins than can be imagined. Opening prison costumes (also featuring sequins) and a chorus of angels and devils are also impressive, as are the realistic statues. Congratulations to Victoria and her team for this truly wonderful work.

In terms of energy, sound and sequins, there is no better bang for your buck in town than All Shook Up, now playing at the National Theatre, St Kilda until 19 October.