If the Spring Season is indeed viewed as a trilogy, it is characterised by three towering performances by the most uniformly strong set of soprano singing actresses seen for many a year. Cheryl Barker as Salome joins Emma Matthews as Lucia and Hiromi Omura as Cio Cio San to bless Melbourne audiences with the kind of consistent level of star power you would be lucky to see at the Met.

Director Gale Edwards follows up her deliciously decadent 2011 production of La Boheme with this blood spattered, thought-provoking staging. The brilliant insight and attention to detail of Edwards and team prove that it is possible to enhance rather than upset an opera by altering its time and setting. Fast proving herself the master of this practice, the prospect of seeing what Edwards will do with Carmen, 2013’s Handa Opera on Sydney Harbour, just became even more tantalising.

With no overture, the rise of curtain thrusts the audience immediately into the lascivious court of King Herod, giving the palpable sense that we have joined a banquet in progress rather than watching a set of actors who have just commenced a performance. Highly purposeful ensemble acting is another hallmark of the quality of Edwards’ direction.

The designers appear to have poised the question: ‘what would an extravagant biblical setting look like with access to modern materials?’ Plastic shields, camouflage fatigues and machine gun bullets adorn soldiers while Herod gads about like King Midas in an all gold suit. A rear wall of slaughtered animal carcasses awaits consumption at the ongoing feast as cringing servants wait on every whim with almost telepathic powers. An underground dungeon lies in close proximity to the dining hall in an area so dark and bloody that the dead body of Narraboth quite believably lies unnoticed as slaves and soldiers continue their duties. Clerical figures at the banquet are denoted by religious garb that would come centuries later, and mother and daughter Herodias and Salome are matched in gleaming metallic prints and vicious horn-like hairstyles.

The pinnacle of this collaboration, expanded to include highly experienced choreographer Kelley Abbey, is the infamous dance of the seven veils. Without giving too much away, Edwards and team have made brilliant use of the sequence as a deconstruction of a range of female ‘types’ perennially used to titillate men and potentially disempower women.

Maestro Simon Hewett commands an expert performance from Orchestra Victoria, coaxing particular power from the brass players. As evocative as a modern film score, the beauty of Strauss’ music is especially apparent during both the emergence and re-entry of John the Baptist from his underground cell.

The recent infrequency of Barker’s Melbourne appearances makes this magnificent achievement even more vital to see. In full command of her tremendously significant powers, Barker sings the score as if it was written expressly for her, with the beauty of her soprano also matched by her acting talent. In a riveting performance, Barker skillfully portrays a young woman changing from playful to petulant as she quickly realises the influence of her burgeoning sexuality. Barker’s final scene on stage alone with the frighteningly realistic severed head of John the Baptist is a tour de force of the highest order. 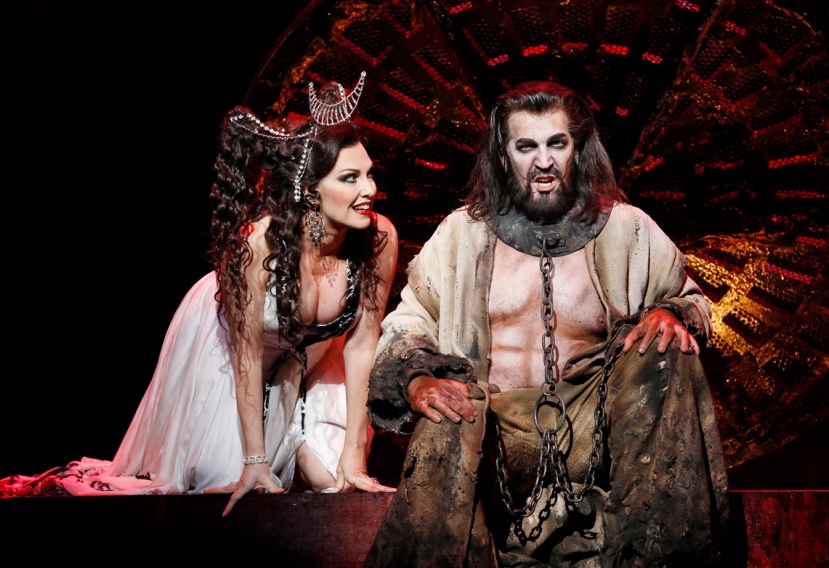 With only a relatively short time actually on stage, Thomas Hall effectively conveys the noble and charismatic character of Jokanaan (John The Baptist). As Jokanaan indignantly rebuffs the immature and unwelcome advances of Salome his fate is sealed. Hall’s baritone is superb, with the powerful lower end of his register used to great effect.

Australian born tenor John Pickering returns to make his OA debut as Herod, lustful king who realises too late the implications of his indulgence of his stepdaughter Salome. Pickering’s voice remains high and clear, and his acting talents round out a rather compelling characterisation.

OA favourite Jacqueline Dark makes a welcome return from maternity leave to play the monstrous Herodias, If Dark’s Katisha was bloodthirsty, her Herodias is practically demonic, writhing as if in physical pain as she vacillates between pride and horror in her daughter Salome’s actions. Appearing in a getup that would be beyond Madonna’s imagination, Dark contrasts the ugliness of Herodias’ actions with the warm beauty of her increasingly powerful mezzo-soprano voice.

Supporting artists are uniformly strong, with standouts including David Corcoran’s highly focused, all too brief performance as Narraboth, Sian Pendry’s physicalisation of the ominous fears of the Page, and Kanen Breen’s reliably fine work as First Jew. All expertly sung, of course.

Fans of the safe, popular, chocolate box style opera repertoire are strongly encouraged to take a walk on the wild side with Salome.