The Australian Ballet’s only triple bill for the year, Vanguard is a celebration, through dance, of the beauty of the human body. Stripped back to sheer unitards, trunks and tights, the dancers achieve a closer intimacy with each other than is usually possible with frills and tutus. The night is also a wonderful demonstration of the depth of talent of the company, with each piece consisting of tight ensembles made up primarily of principal artists, senior artists and soloists.

With so many of the supremely talented dancers on display together, it is interesting to see the emergence of principal artist Adam Bull as a standout performer. With several years having passed since AB had a true star male attraction, Bull’s elegant combination of masculine strength and finely nuanced dance ability, along with his experience and expertise, not to mention his height, give him the makings of true star attraction.

Performed on a glossy white tarquette in front of a gleaming blue backdrop, George Balanchine’s The Four Temperaments starts slowly, with duos and trios building to larger combinations. Dressed in stark black and white, the dancers’ precise movements stand out crisply, and when the full company appear towards the end of the act the effect is quite thrilling. The “Phlegmatic” sequence, showcasing Bull with four female dancers, is a true highlight. The gracefully gorgeous Olivia Bell also shines in “Choleric.”

Bella Figura, a hypnotically mesmerising dreamlike performance, is the standout of the three ballets presented in Vanguard. Audience’s expectations of beginnings and endings are toyed with, particularly at the start, where we return from interval to find dancers already occupying the stage. From an inky, cavernous blackness, curtains rise and fall and dancers emerge and disappear as each sequence merges seamlessly into the next. The music alternates between longing strings and a plucking harp, with soprano Janet Todd and mezzo soprano Margaret Trubiano adding to the ethereal beauty from the pit.

Joke Visser’s costumes for Bella Figura are a range of sheer blacks and reds, with a startling sequence featuring massive blood red skirts. Jiří Kylián’s choreography is deliberately slow, measured and controlled, building in passion as the piece progresses. An exploration of sensuality, the atmosphere is enhanced by the unflinching courage of the female dancers in appearing topless in a couple of tastefully lit and styled segments. As passions reach their peak, the effect is given literal symbolism by the appearance of real roaring fires in the background. The final sequence, performed in complete silence, had 2000 audience members holding their breath in spellbound wonder. 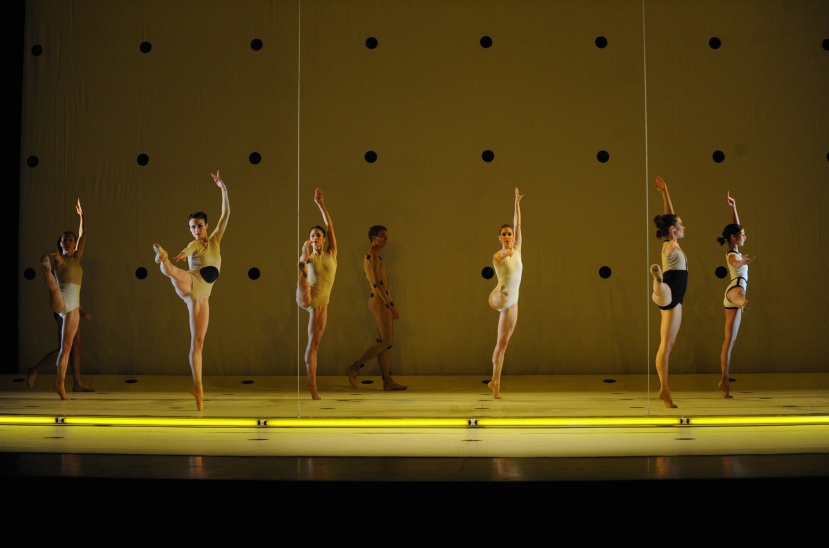 Wayne McGregor’s 2009 commission Dyad 1929 makes a welcome return, with the distinction of what is basically an all-star cast. Performed on a floor and backdrop of white with neatly arranged black dots, the highly physicalized ballet calls on the dancers to contrast rapid movement with slow displays of strength. The flowing style between each segment makes Dyad 1929 a natural partner for the other two ballets in the triple bill, and yet there is also the sense that perhaps the three pieces are a little too similar to each other in style. Steve Reich’s music has an insistent pulsing beat, with the sound enhanced by a heavily percussive orchestration, particularly highlighting the xylophone.

Members of Orchestra Victoria took a well-deserved bow on stage at the end of the night, alongside redoubtable maestro Nicolette Fraillon. The audience also had the chance to thank departing Executive Director Valerie Wilder, who has overseen a highly successful period for the company.

As an evening of pure dance, Vanguard is as expertly performed as audiences could possibly desire.