A visit from Broadway royalty drew a Melbourne crowd who cheered just for the house lights dimming at the start. Anticipation reached fever pitch as the overture of hits played along with a sizzling sizzle reel that reflected just how extensive and varied Tony and Emmy winner Kristin Chenoweth’s career has been to date.

Looking impossibly slender in a tight black pantsuit, Chenoweth had to wait for an MCG-sized ovation to subside before launching into her first virtuosic number. Sipping on a Boost Juice, Chenoweth extolled the virtues of Melbourne, and Australia in general, with her most authentic praise coming for the people she has met. Even some show folk she saw on stage last week in Sydney were in the house.  Beaming with joy and yet charmingly self-effacing, Chenoweth had the audience in her palm with her delightful tales about small town Oklahoma, her chemical engineer family and her prolific stage and television adventures.

The concert featured terrific production values, with back up performers, costume changes, cute props and pre-recorded video segments. Chenoweth was backed by a substantial 12-piece cabaret band, with loyal music director Mary-Mitchell Campbell on the grand piano. New York performers Will Taylor, Jennifer Diamond and  Constantine Germancos sang and performed with Chenoweth in a multitude of guises.

“Maybe This Time,” an early crowd favourite that ended with a killer money note, led to a story about Kander and Ebb, authors of her first Broadway show, Steel Pier. Colour Me. Chenoweth shared her first singing teacher’s reaction to Kander & Ebb’s “My Coloring Book,” a song she had chosen for a master class, and a song to which she now feels comfortable to return.

Music theatre aficionados, present in their hundreds upon hundreds, enjoyed the cheeky sequence on Wicked Tony-slayer Avenue Q. Having done her homework, Chenoweth had the last laugh on the Bad Idea Bears and Lucy T. Slut with knowledge that Wicked had won the Helpmann (and Avenue Q had lost to Jersey Boys).

Chenoweth was joined by Germanacos for a haunting pair of songs from her most recent Broadway outing, Promises, Promises. Her description of herself as a somewhat controversial Christian was met with a warm “not in this country” from the front rows. This led to the rousing spiritual anthem “Upon This Rock.”

Act one closed with another ‘prayer,’ an exquisite rendition of “Bring Him Home.” Another 80s cast album favourite of Chenoweth’s, presented in the second half, was Andrew Lloyd Webber’s dazzling soprano ballad  “Wishing You Were Somehow Here Again.” 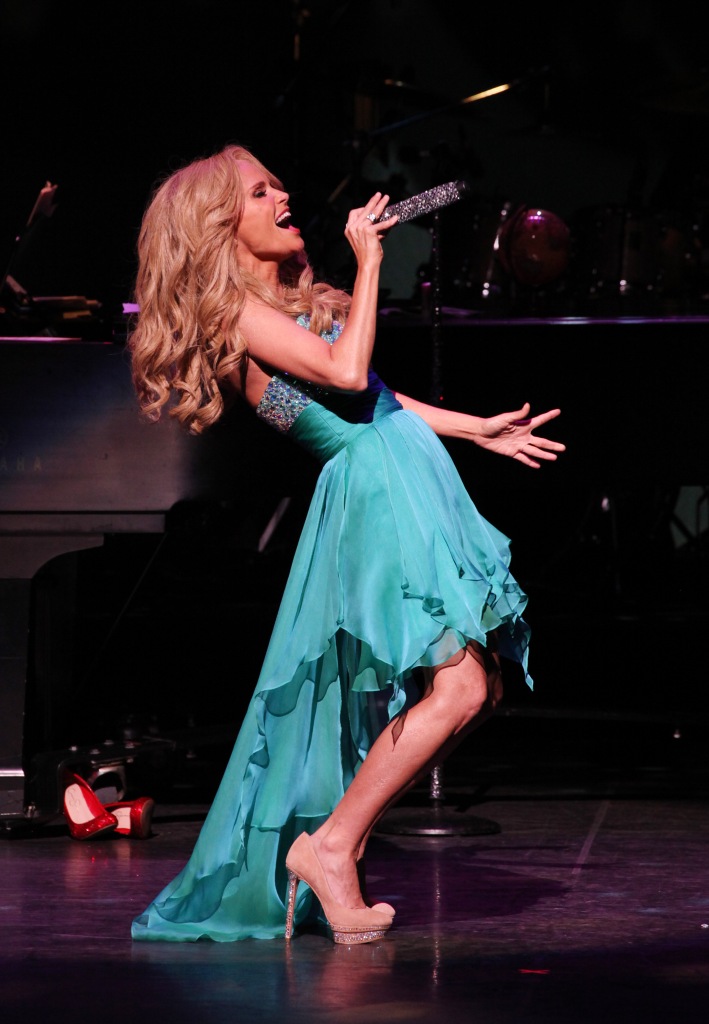 In act two, Chenoweth shared her love of shoes, her love of Dolly Parton and her love of disco before eventually coming down to earth somewhat to share a more serious and heartfelt message about leaving your mark on the world. Campbell spoke of her charitable foundation ASTEP, and Chenoweth described her own involvement in animal care charity, Maddies Corner.

Glee, GCB and other Broadway appearances aside, the show everyone wanted to hear from was of course über hit Wicked, and Chenoweth certainly did not disappoint. After confiding that she scours the net for international Glindas, Chenoweth presented a hilarious version of “Popular” in a range of languages. Diction was superb, and there was plenty of the original interpretation thrown to satisfy fans. The showpiece of the entire night came with the sentimental duet “For Good.” Having sent the boys into the audience to seek a potential Elphaba, Gretel Scarlett was put forth by a friend. Hearing that Scarlett was Elphaba understudy in Seoul and Singapore, Chenoweth brought her up on stage to sing, with the performance bringing a mid-show standing ovation from the delirious crowd.

Music theatre, opera, country, gospel, disco – Chenoweth proved she can do it all. Hilariously funny, sweetly generous and totally adorable, she left the fans more in love with her than ever. In this time of pre-packaged fame and tacky reality schlock, Chenoweth’s talent and spirit shine forth, revealing her as the real deal she truly is.