Victorian Opera: Sunday in the Park with George review

Inventive design, deft direction and an outstanding cast combine for an all too rare staging of Stephen Sondheim and James Lapine’s treasured masterwork Sunday in the Park with George. An air of quality pervades the entire piece, with musical, dramatic and technical achievements coalescing to create a cohesive, absorbing and affecting whole. 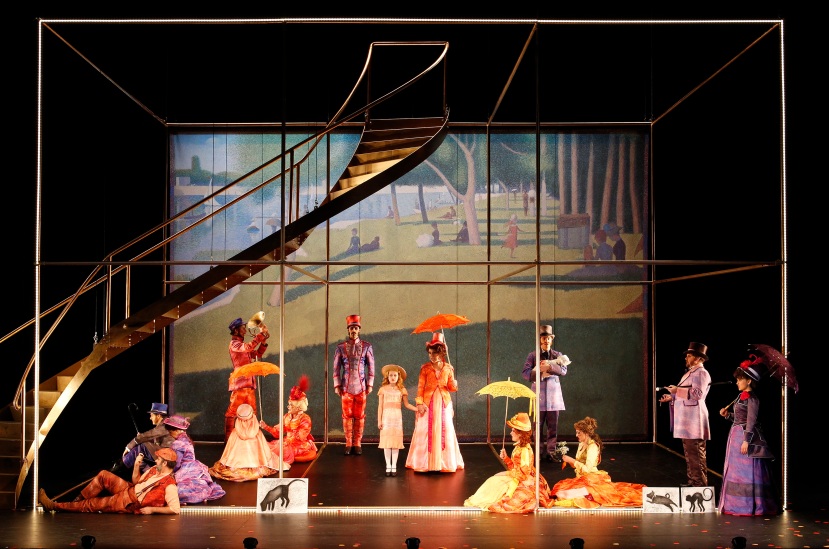 Particularly striking in the success of the evening are the innovative, amusing and beautiful designs of Anna Cordingley. Showing great respect for the original artworks of Georges Seurat, Cordingley has created massive canvases and scrims that glide in and out of the cube frame staging. The ingenious costumes, textured and coloured to replicate Seurat’s pointillist style, are absolutely stunning. Clever touches are almost too numerous to mention, but highlights include the live recreations of “Bathers at Asnières” and “Young Woman Powdering Herself,” the shadow puppetry of the Soldier’s companion, and the new 3D interpretation of “Chromolume #7.” Dot’s bustled dress, which unfurls as she cuts loose before rewinding as she resumes her pose, could not be bettered by William Ivey Long. After the majestic finale to act one, in which “A Sunday Afternoon on the Island of La Grand Jatte” comes to life, the ordinariness of modern day can cause act two to fall flat but Cordingley has fashioned a striking cocktail party in black, white and splashes of orange, live projection art and all, that makes a real feature of “Putting it Together.”

Niklas Pajanti’s lighting design complements Cordingley’s designs perfectly, particularly in moving focus between the front and rear of scrims, and in the gradual illumination of painting as George is at work.

Highly experienced music theatre director Stuart Maunder shows a sure hand in developing a fluid, abstract staging that flows swiftly and smoothly. The colourful supporting characters of the painting are clearly established so that the ever-increasing cacophony of overlapping stories makes perfect sense. Even the second act ensemble characters, with less text to draw on, are uniquely and sharply delineated, with the cast rising expertly to the meaty task of playing two distinct characters. Both renditions of noble company number “Sunday” are extremely satisfying, and act two opener “It’s Hot Up Here” is notable for its deliciously cheeky amusement. 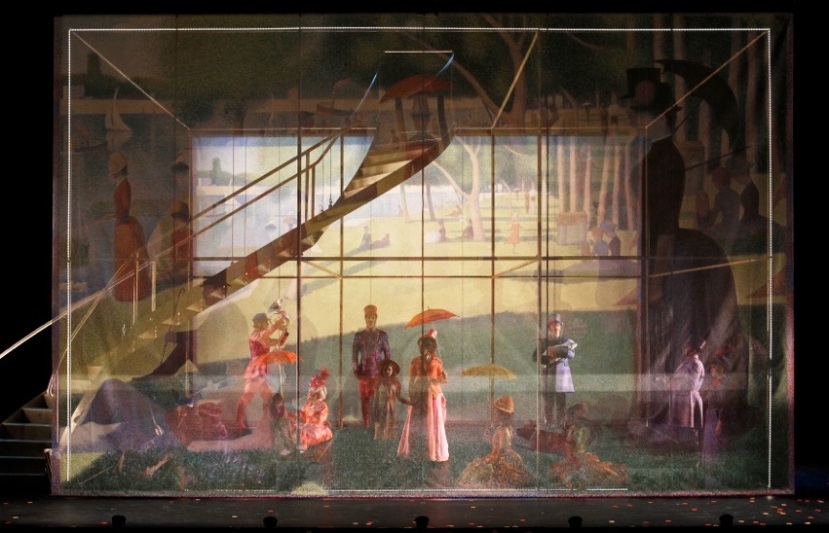 Conductor Phoebe Briggs brings out all the colour and light in Sondheim’s score. The band of eleven musicians from Orchestra Victoria is excellent, with the percussion and harp playing adding special beauty to the music. The wonderful quality of company singing is no surprise given the rich talents of the ensemble cast. The only slight disappointment is that the somewhat raw and over-amplified sound design lets down the high standard of the singing; this may well be remedied as the season progresses.

Alexander Lewis’ tremendous performance, as the pair of artists Georges Seurat and his great-grandson George, is all the more brilliant for the restraint he shows in portraying these private, highly focused men. It is a major showcase of a role that gives the performer little in the way of ‘showy’ business to perform. If Georges were alive today, he may have been diagnosed somewhere on the Asperger’s spectrum, such were his difficulties in reading social cues and making connections with people. The charismatic Lewis neatly underplays this agitated energy, drawing the audience in to his performance. The knowing winks in “Putting it Together” are magnified by live video projection and Lewis works this like a pro. Best of all, Lewis’ singing is extraordinary, featuring a sumptuous tone and a rock-solid musicality that makes light work of the fiendish score.

Christina O’Neill gives an engaging performance as Seurat’s flighty mistress and muse Dot, and, 100 years later, Dot’s wheelchair bound American-raised daughter Marie. The sharp contrast between the two roles is all the more striking given the speed with which O’Neill must flick between the pair in act two. The poignancy of Marie’s reminiscences is one of the most affecting aspects of the show, and O’Neill’s rendition of “Children and Art” brings this home beautifully. Her singing of act one’s “Everybody Loves Louis” is also rather delectable.

Following the stunning success of Nixon in China, Victorian Opera has shown themselves to be the company to watch in 2013. Music theatre aficionados should do whatever they must to see Sunday in the Park with George.

Sunday in the Park with George plays at Playhouse, Arts Centre Melbourne until 27 July 2013.