Sentimental favourite of the cycle, Die Walküre also features the most recognizable piece of Wagner’s music for the Ring. From the gloriously romantic love duets of act one to the thrilling entry of the Valkyries in act three, it is an evening of passion, high drama and heartbreak.

Spoiler alert: if you have a ticket to the Melbourne Ring, come back and look at the photos in this article after seeing the performance live at the State Theatre. Also, note that this is a preview/discussion of Die Walküre, not a review.

Many years after the Gods entered their new home in Valhalla at the end of Das Rheingold,  we meet Wotan’s child Siegmund struggling to find shelter during a heavy blizzard. The opera opens on a small cabin rotating on the revolve. A light is seen in the window, then the cabin is revealed open on one side. Set decoration is detailed and realistic. Siegmund staggers into the cabin, meeting, and enjoying instant chemistry with, Sieglinde. Her husband Hunding returns home and is unhappy to find a stranger present. 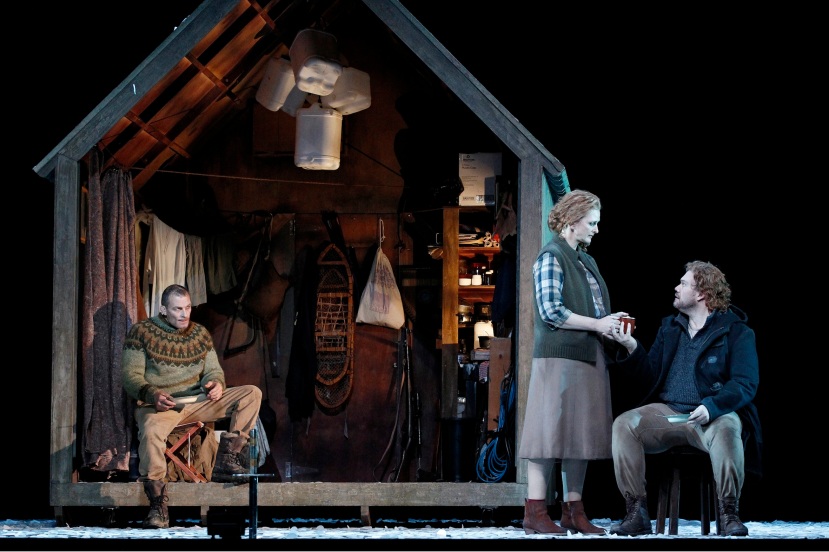 Siegmund and Sieglinde fall rapturously in love, also realising that they twin brother and sister. Siegmund is now able to pull out the sword Nothung, which was left embedded in the ground by The Wanderer (Wotan).

In their new home, Wotan and Fricka have built an even more impressive taxidermy gallery, with some twenty preserved animals hanging as exhibits within an enormous white triple-level ramp. 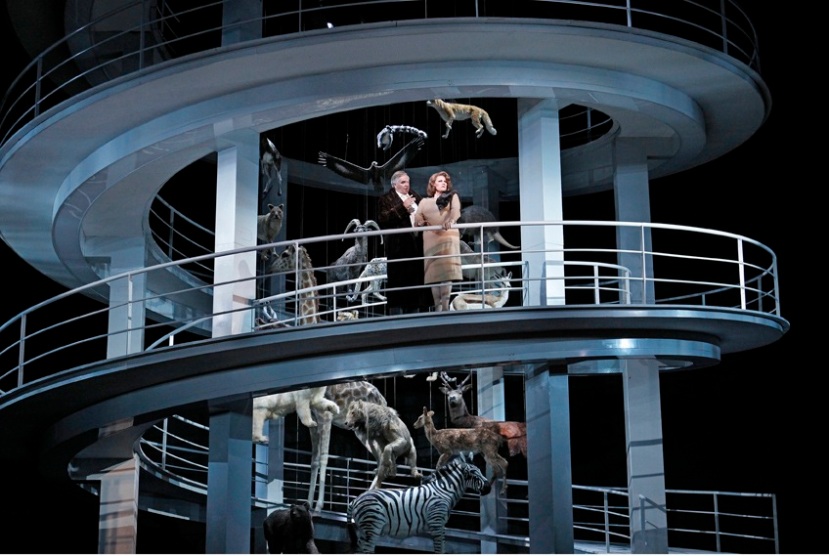 Fricka dominates her husband’s will, forcing him to allow Siegmund to die as punishment for incest and adultery.

Wotan explains to his beloved daughter Brünnhilde that he must allow Siegmund to die, as he is not to be the “free” hero that will defeat Fafner and regain the Ring. 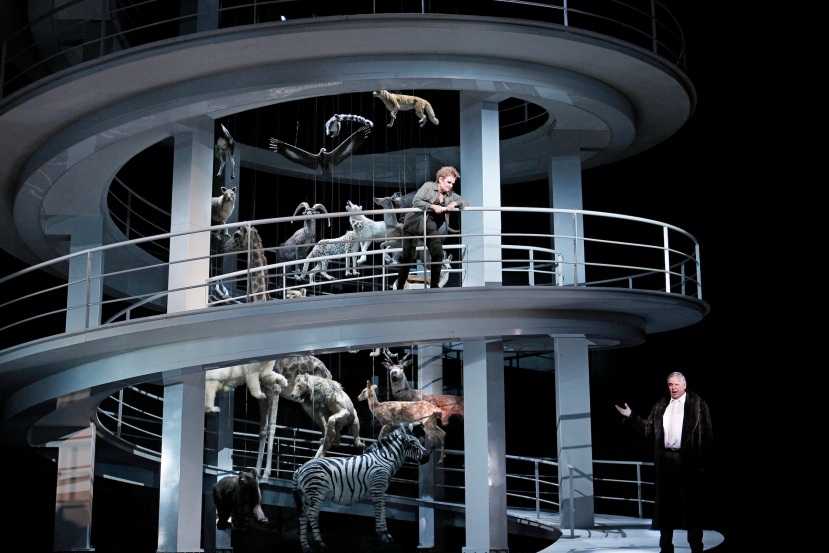 Sieglinde and Siegmund enter, exhausted. Brünnhilde explains to Siegmund that he is no longer protected. 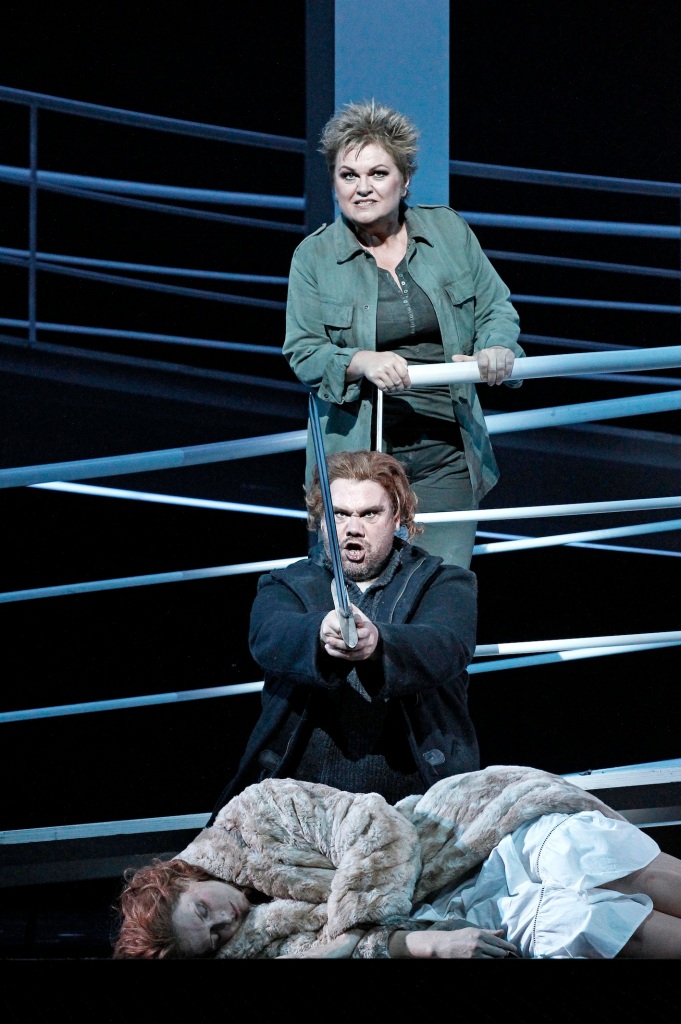 Hunding enters looking for a fight. Siegmund’s sword is shattered by Wotan, who also angrily dispatches Hunding with a wave of his hand. Brünnhilde flees with Sieglinde and the pieces of the sword Nothung.

The Valkyries fly in on swings to the well known music “The Ride of the Valkyries.” There is a large number of people on the revolve, which turns to reveal the dead bodies from the battle against Alberich.

The Valkyries place bodies on swings and they fly out. Brünnhilde flies in with Sieglinde, who is pregnant by Siegmund. 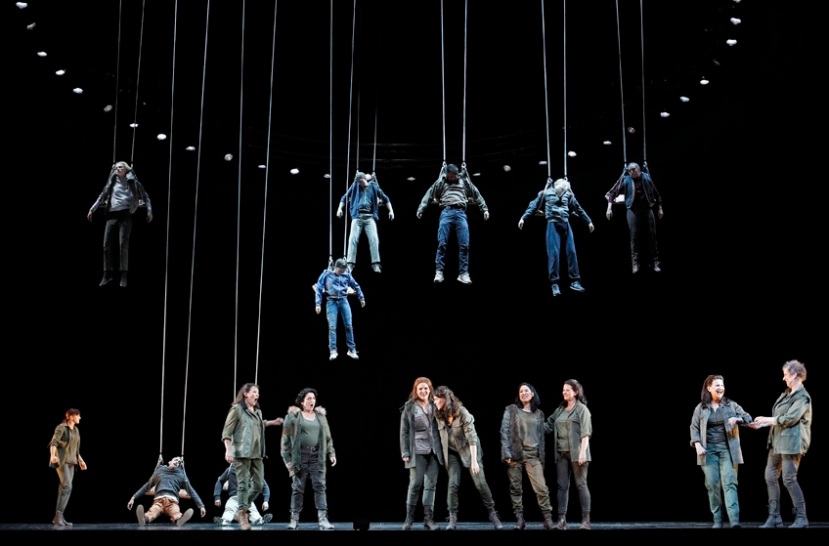 The Valkyries are too afraid of Wotan to help Brünnhilde.

Wotan arrives and scatters The Valkyries. As punishment for her disobedience, Wotan leaves Brünnhilde to sleep, but protected by a (real!) ring of fire so that the man who rescues her will at least have to be a hero. 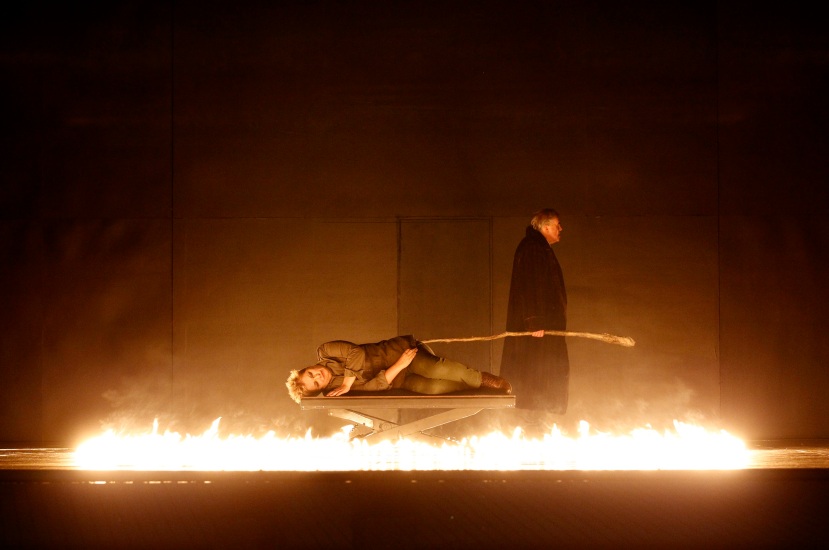 A large number of activities are occurring as part of The Melbourne Ring Festival, which runs concurrently with the opera cycle until 13 December 2013.