For a somewhat controversial production, this new staging is surprisingly traditional in form. Despite the update in time and an overreliance on stage business, the heart and soul of the immortal tragedy ring true, and the singers are largely unimpeded from performing at their very best. 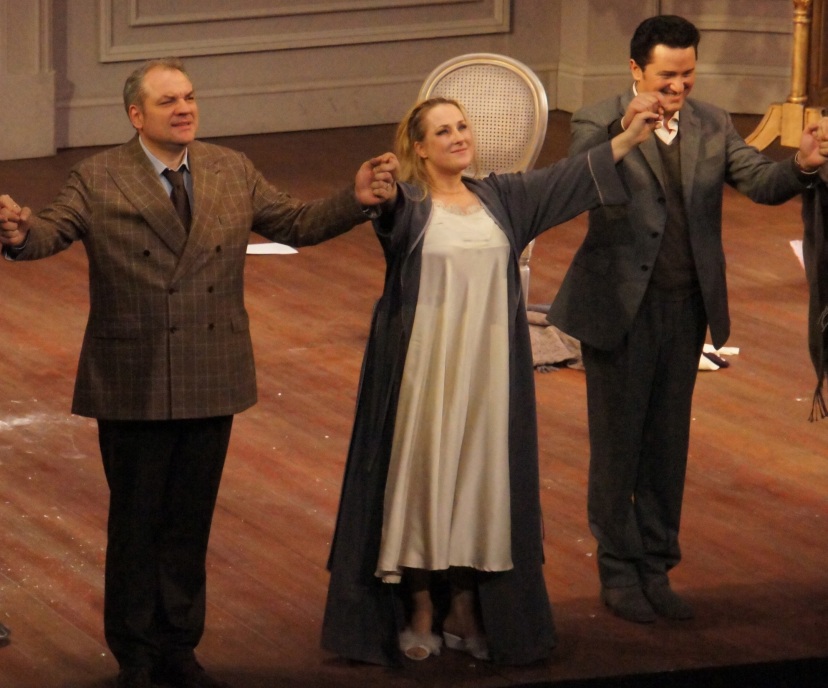 Besides the impossibly glamorous audience, gleaming chandelier and general aura of historical magnificence, an aspect that is particularly special to La Scala is the Hush. With its multitude of boxes facing inwards in the horseshoe design, there is a sense that we are all there to watch the opera together, a feeling that is missing in the rows upon forward-facing rows of a traditional theatre. As the maestro raises his baton, a communal intake of breath marks the expectant Hush that falls instantly over the entire house as we prepare to enjoy the beauty of the music.

The Hush is rewarded by glorious singing by this exemplary cast and magnificent playing by the Orchestra of Teatro alla Scala. Maestro Daniele Gatti may have made a smattering of odd choices with tempi, but the beauty of the playing and the support for the singers could not be faulted. 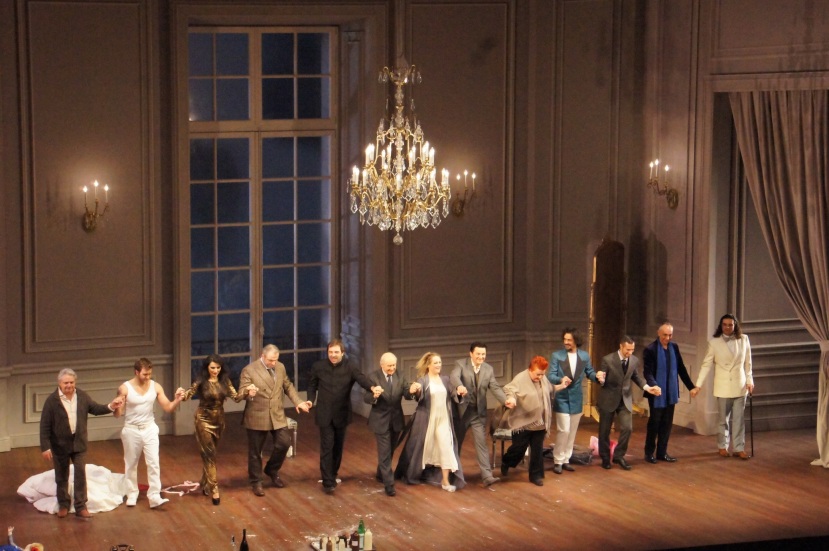 In a setting that appears to be close to current day, Violetta ponders her beautiful reflection in a full-length gold mirror before her guests arrive. In an electric blue gown with shimmering diamante-encrusted panel over her décolletage, she wears a red camellia in her upswept blonde hair. In sharp contrast to the usual modest black-clad maid, Annina sports spiky burnt orange hair and wears a flowing amber robe. Indeed, when the guests assemble there is an overall aesthetic that could be described as “Eurotrash,” with garish, oversized wigs and all manner of outfits on show. Although they have the appearance of a troupe of supernumeraries, the Chorus of Teatro alla Scala sing with unmistakable quality.

Director Dmitri Tcherniakov seems particularly intent on avoiding the “park and bark” style adopted by so many performers and directors.  Annina stays with her mistress when the guests have gone to dance, and Violetta sings “É strano” and “Ah, fors’é lui” to her. This sequence works well enough, but when Violetta goes on to sing “Sempre libera” to her maid, there is a sense of a loss of an intimacy that is usually shared between the audience and Violetta. 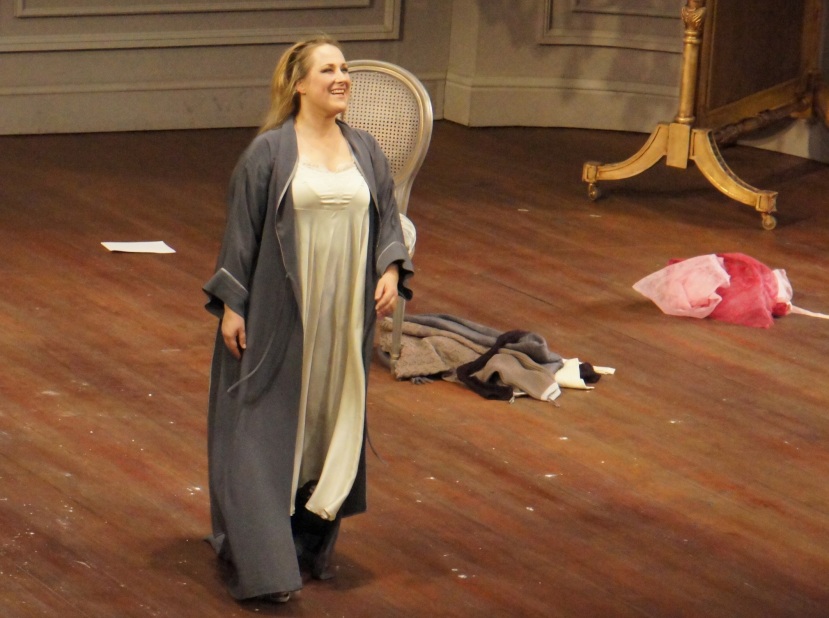 Diana Damrau, previously reviewed as Violetta at New York’s Metropolitan Opera, reaches new heights in her passionate portrayal of the temperamental courtesan. Her pianissimo singing, in particular, is divine, retaining a pure, unwavering tone at even the softest volumes. 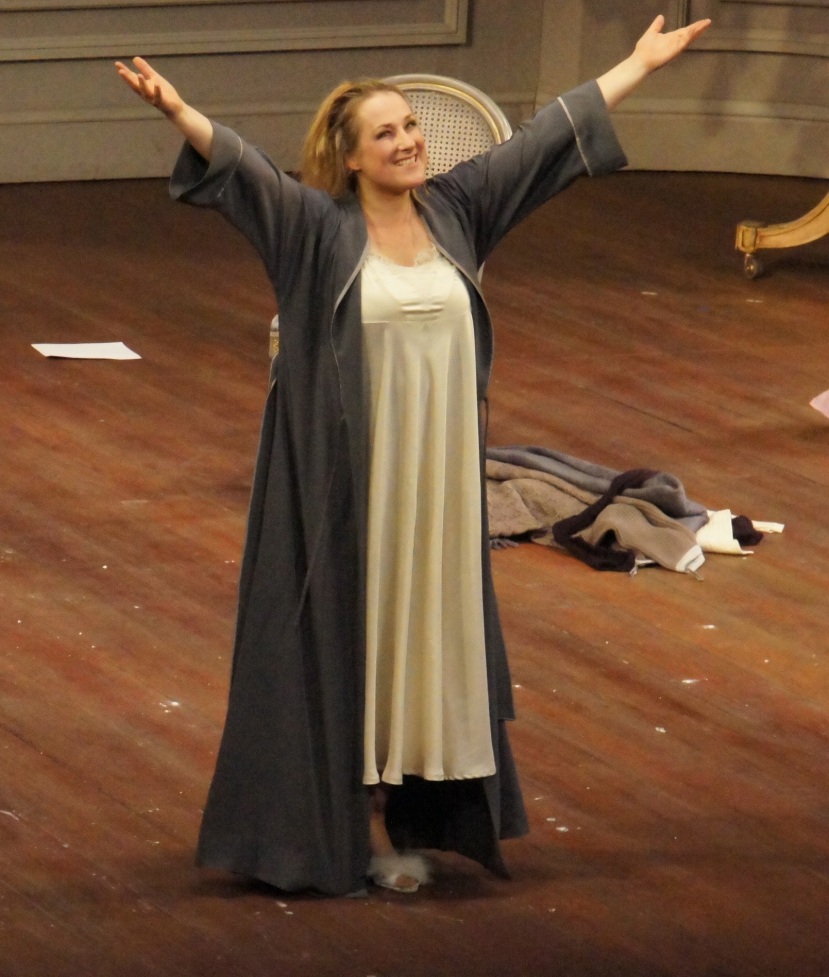 Act two, scene one follows act one after a brief pause. The massive farmhouse kitchen is a startling transformation from the elegant pale grey walls of act one’s Paris salon.  Towering egg yolk yellow walls house an oversized oven, rangehood, kitchen table and cabinet. In the rear, a bay window gives a verdant view of the garden. Alfredo sings “De’miei bollenti spiriti” to an elderly male servant while kneading and rolling bread dough. 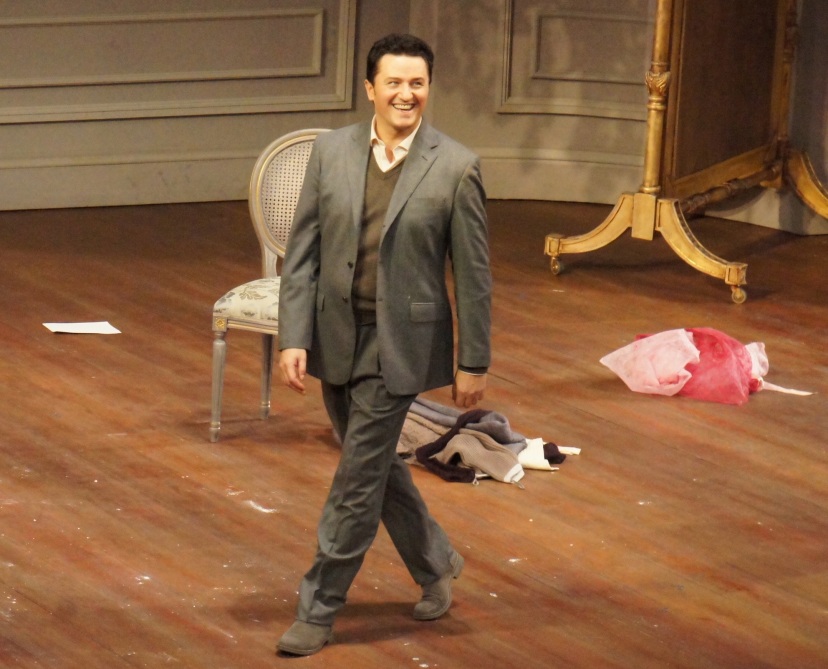 Boyishly handsome superstar tenor Piotr Beczala has a significant featured moment here, making more of the sequence than the usual quick of arias. Hearing Violetta has gone to sell more possessions, he throws his overnight bag to the floor in a rage as he prepares to follow Violetta back to Paris. Beczala’s singing for the entire evening is reliably pristine, expressive and thrilling. 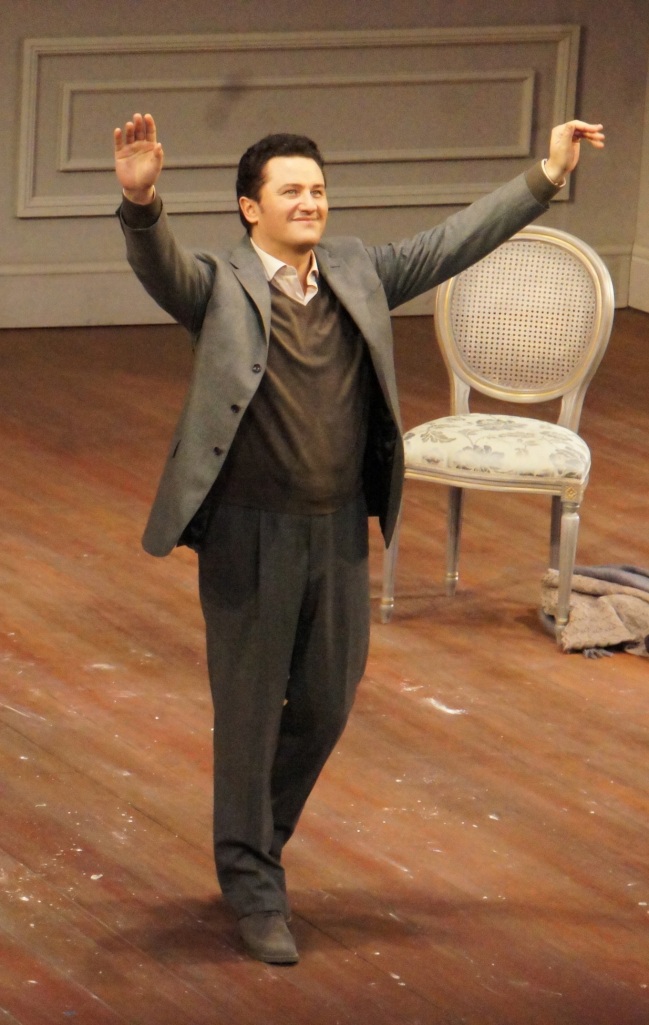 Zelkjo Lucic’s entrance as Giorgio lacks impact, but he soon makes his presence felt. Having worked together as father and daughter in the Met’s Rigoletto last year, Lucic and Damrau clearly enjoy a strong working relationship. The beauty of their singing together has a tenderness and beauty usually reserved for singers playing a pair of lovers. Beczala, the third member of this Verdi dream team reunited from Rigoletto, also shared palpable chemistry with his co-stars.

Lucic gives a masterful rendition of “Di Provenza il mar,” even though it is slightly undermined by Alfredo’s constant agitated movement about the kitchen. 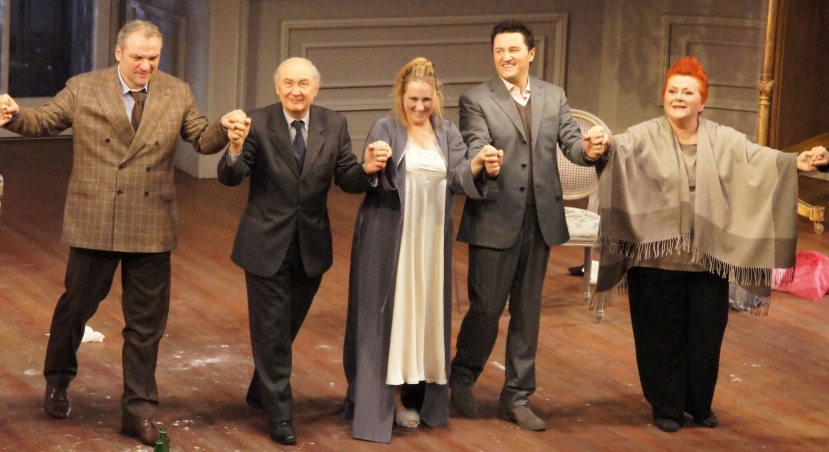 Momentum into the party scene of act two, scene two is lost by the placement of interval at this point. In the oddest, and most underwhelming, choice, of the night, Tcherniakov has the ensemble just stand and sing the gypsy and matador choruses to Alfredo. Flora may be wearing a large Indian headdress but there is not a gypsy or matador in sight. Violetta arrives in a flowing jade green gown but with an Abba-sized blonde perm that makes her look disconcertingly like Kath Day-Knight. Annina wears a fuschia robe with gold trim that makes her look like the high priest of a mardi gras. Even with the updated setting, the guests’ outrage at Alfredo throwing money at Violetta still makes sense. Giorgio arrives and, in his anger, hurls Alfredo in to a pair of lamps.

After a pause, we are back in the original salon set, with Violetta’s deathbed being a lone eiderdown quilt on the floor. Damrau’s incredible singing of “Addio del passato,”which ends in the most impossibly delicate final note as she cocoons herself in the quilt on the floor, absolutely brings down the house. 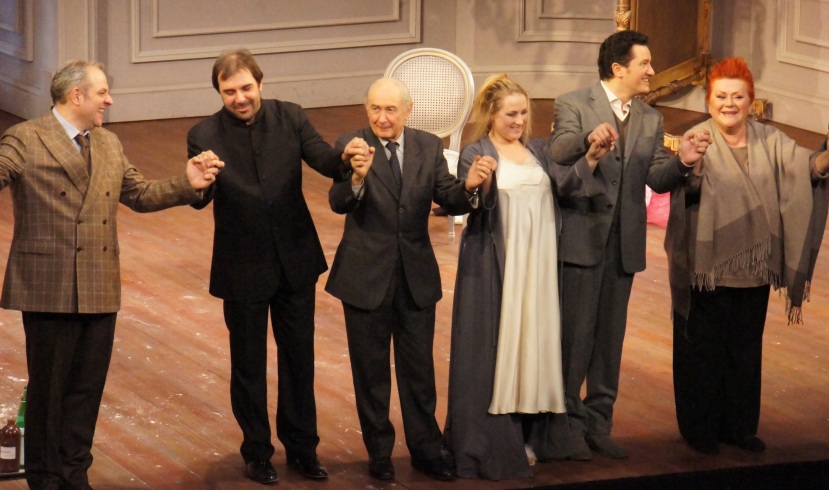 Although perhaps not retaining the class and style usually associated with this great house, the production provided a wonderful chance to enjoy three of the world’s greatest singers at their best.

The performance of La Traviata on 3 January 2014 was the final at La Scala for this current season.

Productions images can be seen HERE.