Melbourne turned on a suitably blustery, rainy night for the opening of Hoy Polloy Theatre’s The Seafarer, with the howling from the weather and the sound effects being indistinguishable at times.

In the intimate space of fortyfivedownstairs, the audience feels like a sixth player at the table with the motley clutch of Irishmen spending Christmas Eve drinking, cussing and playing poker with deadly stakes

Acclaimed Irish playwright Conor McPherson’s 2006 work is the star attraction here, its script a mixture of comic blarney and raw drama, with a touch of supernatural magic for good measure. McPherson’s skill at sketching characters, both those on the stage and those in the wider story, is uncanny, and his keen observation of the foibles human nature guarantees that viewers will find plenty to recognise and identify with in the play.

This tale of two Irish brothers, in which Sharky’s alcoholism is perpetually tested by ungrateful, blind older brother Richard’s dependence, has a grounded realism, and yet the paranormal aspect is presented as convincingly natural. The devilish twist that comes late in act one creates an insidious subtext for the remainder of the play, in that the audience now shares a deadly secret with two characters while the other three remain oblivious. If there is one clunky device, it is an over-reliance on the contrivance of “the winos in the lane” as a reason for characters to go offstage. Nonetheless, the tension slowly builds to a surprising, satisfying finale. 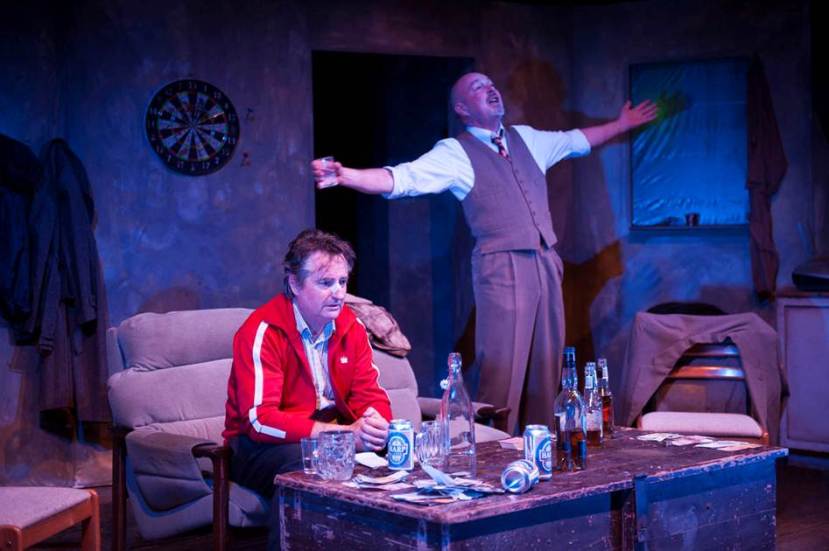 Wayne Pearn’s direction supports the natural feel of McPherson’s dialogue with gentle Irish accents and uncomplicated stage action. Energy and pace are a little low at first, but both pick up as two further guests arrive for the all-night poker match. Grudges, habits and familiarity are clearly conveyed so as to portray a broader snapshot of life than the one night we are seeing.

Lindon Blakey’s sound design and Stelios Karagiannis’ lighting add to the eerie atmosphere. George Tranter’s set is impressive in scale and solidly built (by Rennie Sundram and Warrick Dunn) but has unfortunately been painted rather hideously and decorated poorly with beer posters. The shabby furniture and other detritus of the dilapidated living room are all quite suitable.

Geoff Hickey does not allow a scrap of sympathy for Richard to come through, showing the disabled older man to be relentlessly ungrateful and overbearing. It is a huge role, and although Hickey is well cast, he takes a little while to get going, his energy lifted by the other actors as the play progresses. Hickey may not the best at blind acting, but he lands plenty of laughs from Richard’s priggish nature.

All five actors work together with clear trust and camaraderie.

Playgoers seeking a bit of a thrill on a cold winter’s night will find The Seafarer a solid entertainment.

Hoy Polloy Theatre’s production of The Seafarer plays at fortyfivedownstairs until 10 August 2014.