Meredith Willson may have written the book, music and lyrics for The Music Man, but Xavier Brouwer takes this feat three steps further by also acting as director, music director and producer for his new Australian musical Grey’s Lobotomy.

Taking aim at Australia’s Health Care foibles, Brouwer has unearthed a plethora of healthcare public service campaigns, from Life Be In It’s Norm and his aerobicized sister Libby though to the Your Man Reminder App, with a visit from the Grim Reaper and a truly heinous commercial about strokes along the way.

The show in the style of is revuesical, with the focus rotating between scenes and songs involving various sets of health care professionals (or unprofessionals) and patients, with a couple of stand alone songs interspersed throughout.

A harried ER nurse combats a pushy boss, a lovestruck psych nurse and a sleazy boyfriend as she deals with flabby Norm and an escaped mental patient. The boyfriend works in marketing, where attempts to create campaigns for various government initiatives, however inane, seem frighteningly close to the truth.

Directing your own material can be a risk, but thankfully Brouwer does not fall into the trap of creating an overlong or self-indulgent show. The pace is bright and breezy, and cast energy is kept high. The aspect where a second set of eyes could have helped is in a dramaturgical sense. The through line linking the characters is solid enough, and the comedic concept is more than sound, but there is a lack of a distinct “voice” to the material, with some songs and scenes poking fun at health care messages while others take health care seriously, delivering messages of their own. The laugh rate needs work, with a focus on punchlines to songs and scenes.

The most difficult aspect in writing a new show is the music. Fortunately, Brouwer’s significant talents as a songwriter have seen him craft a dozen or so songs, many of which have catchy melodies on first listen. Accompaniment from the band of three musicians is solid, and tight harmonies from the cast are uniformly strong. Songs with a peppier tempo, such as “Power Nurse” and “Work Out” are better suited to the comedy format than some of the slower numbers, which really need to be enlivened. Working with a writing partner or editor may have helped to avoid some of the repetition in the lyrics, a factor that does not help the flow of comedy. Overall, the score is an impressive achievement, especially given the scarcity of new Australian work.

Sarah Tulloch’s collage-like hospital scenic design provides an attractive setting, and the use of real hospital equipment adds an authentic air. Brendan Jellie’s lighting is bright and clear. Tulloch’s costumes are crisp and colourful, with some that really stand out due to extra attention, such as the red and white checks for “Sugar.” This song also features some of Emmie Câpek’s best choreography, with further highlights coming in Florence Nightingale number “Foxtrot with a Lamp.” Câpek is blessed with several cast members who are very strong dancers.

The cast of six performers works with focus and verve to bring the material to life. Each are well matched in terms of singing ability, being equally confident with solos and harmonies.

Experienced performer Penny Larkins is a good sport as prancercising Libby, and captures the exasperation of modern marketing double talk as Cheryl. Kirsty Gayther has a sweet presence as Violet Grey, plucky heroine of the hospital dramas. Laura Raiti balances the stern Miss Black with some great dancing and chorus work.

Morgan Phillips has a nicely underplayed comedic style, used to great effect as the doddering Grim Reaper. Ollie Bell enlivens all his scenes with perky energy and terrific dancing. Charismatic actor Chris Asimos has a very buff body that makes the transformation of Norm rather amazing. 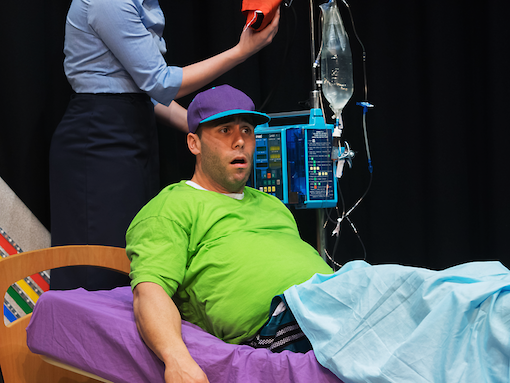 Given the money and attention lavished on Broadway imports, new Australian works deserve the support and attention of music theatre fans. In its premiere season, Grey’s Lobotomy could still use some nips and tucks, but is pleasant entertainment that is very affordably priced.