The production may be well known, and well loved, but the Opera Australia role debuts of soprano Lorina Gore and tenor Rame Lahaj make for a scintillating evening.

As long as designer Michael Yeargen’s highly ornate, deliberately crowded settings draw gasps at the iris-like opening of the double curtain, there is no reason for Opera Australia to even consider dispensing with this much revered 21-year-old production. Act two’s fast change from the country house to Flora’s party, during the briefest of pauses, remains a remarkable feat from the hardworking backstage crew.

Verdi’s divine score is heard afresh under the baton of maestro Renato Palumbo. Carefully considered and immaculately controlled, Palumbo’s conducting brings out fine details and emotional underpinnings. By reconsidering the tempi of individual phrases, for example the ominous entrance music of Germont Sr, Palumbo enhances their impact. The countermelodies in the overture are realised so distinctly that they seem to be played by two separate orchestras, adroitly foreshadowing Violetta’s suffering while the parties of Paris continue. 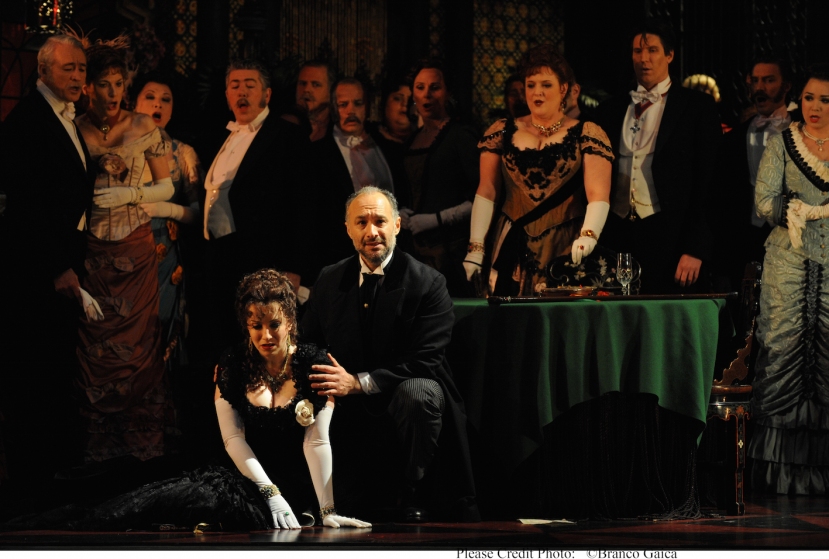 A number of aspects align to facilitate successful debuts for Gore and Lahaj. Revival director Tama Matheson has clearly worked closely and carefully with the cast to mine the text for its full dramatic impact. Moments such as Alfredo’s unconscionably rough handling of Violetta in front of Flora’s guests and the Baron’s challenge of a duel (with a slap of the glove to Alfredo’s face) land powerfully. In the stark final act, Matheson paints a striking stage picture that demarcates each character’s relationship to the dying courtesan.

A host of experienced, well-established Opera Australia performers take the supporting roles, working complaisantly together to create a delightfully festive atmosphere in the party scenes. Dominica Matthews projects joyous warmth as glamorous hostess Flora, hilariously chasing after her protector the Marquis, played by Luke Gabbedy, when she notices his wandering eye. Choice tenor John Longmuir conveys flamboyant fun as Gastone, impressively leading the band of “toreadors” in their party performance. Pelham Andrews matches his strong physical presence with a powerful baritone as Baron Douphol. In lovely voice, Natalie Aroyan is a sympathetic presence as maid Annina.

Negating the law of diminishing returns, José Carbó returns to the role of Giorgio Germont with ever-increasing authority, presence and vocal strength. Using the power of stillness, Carbó puts all of Germont’s command in his voice and steely gaze, building to a superb rendition of “Di Provenza il mar.”

Gore has played leads for Opera Australia and has played Violetta elsewhere, but the role debut on the Joan Sutherland Theatre stage at Sydney Opera House is a significant moment indeed. Gore made a highly auspicious performance, rewarded with a highly enthusiastic outpouring of the warmest possible cheers and applause for her individual curtain call directly after the opera’s finale.

Looking every bit the pale, slight Violetta one might imagine, Gore highlights Violetta’s delicate vulnerability, keeping a tense layer of fear bubbling just below the surface. While a more relaxed enjoyment of Violetta’s reckless abandon will most likely come as Gore builds confidence into the season, the emotional and physical journey is affectingly portrayed.

Rather than the soppy love at first sight that is often seen, Gore’s Violetta maintains a stiffly formal lack of familiarity towards Alfredo at their first meeting. Young and handsome he may be, but means and power are far more attractive to Violetta. During her final sequence of arias in act one, a winning piece of direction sees Violetta sit on a downstage chair and sing directly to the audience. This moment forges a noticeably warm bond between Gore and the audience, making the final applause for act one all more resounding.

Gore’s exquisite soprano proves adept to the range of styles required to sing Violetta. Possessing a particularly effortless coloratura, Gore brings a lovely lightness to ornamental notes. Her control during pianissimo phrases is immaculate, and she switches seamlessly to a more powerful sound for Violetta’s indignation, also conveying joy with bright bell-like tones.

In contrast with her gorgeous appearance in Flora’s act two party, Gore looks (deliberately) ghastly as Violetta sits and awaits her doom in the moving final act. Violetta’s death throes are clear as Gore shows her painfully grasping for the final few phrases of “Addio, del passato.” The pain of what might have been is acutely felt as Violetta dies in Alfredo’s arms like a limp rag doll.

Hailing from Kosovo, Lahaj is the most exciting Alfredo seen locally since Gianluca Terranova in the inaugural Handa Opera on Sydney Harbour. A terrific actor, Lahaj charts the full emotional journey of Alfredo, from ardent admirer to impassioned lover, through to his brutish anger and subsequent shame and sorrow. Despite his striking looks, Lahaj clearly conveys Alfredo’s shy awkwardness at first meeting Violetta. His countenance changes as a dark storm cloud overtakes Alfredo’s logic, which then melts away with as deep regret takes over.

Possessing a rich, luxurious voice, Lahaj moves easily from middle to upper register with equal strength. If there are fleeting moments when his pitching is not quite accurate, it may well have be due to opening night nerves, which will soon dissipate as the season progresses. Combined with his charismatic presence, and his clear enjoyment of being on stage, the tone and lustre of Lahaj’s voice portent a very exciting future.

The perfect choice for newcomers, long-term operagoers will also enjoy and appreciate this season of La Traviata for the thrilling debuts of Gore and Lahaj.