The cream of Australian music theatre talent shine in this most intelligently adult of Broadway musicals. 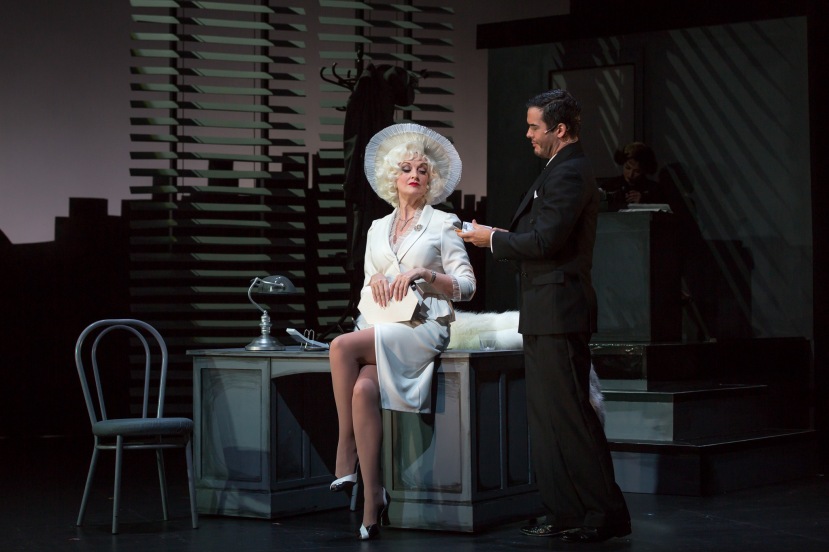 Having raised the bar for boutique musical presentations with their inaugural season of Passion in 2014, Life Like Company works their magic again with City of Angels, miraculously providing fully realised staging, smoking hot band and stellar cast, all for a season of a scant four days.

The combination of brilliant show and intelligent actors creates an electric atmosphere, and the almost three hour running time fairly zips by. This must be the year for City of Angels, with London’s Donmar Warehouse presenting a sold-out season of City of Angels last Christmas.

Legendary Broadway composer Cy Coleman and colleagues Larry Gelbart (book) and David Zippel (lyrics) broke the mold with this 1989 multiple Tony Award-winning musical. The trio created a work of intricate complexity, the likes of which has rarely been since on the increasingly Disneyfied, tourist-grabbing Great White Way.

A dazzling homage to 1940s Hollywood film noir, the show features a snappy jazz-infused score and a book and lyrics peppered with delectably risqué double entendres. Attracting the talented cast is a set of terrific lead roles, most of which are wittily conceived as dual roles, and everyone has their big song (or even two). 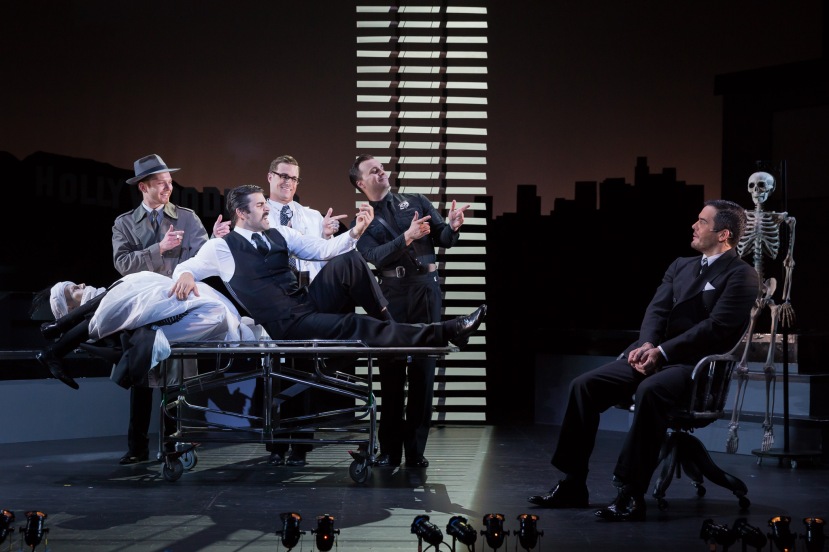 The conceit of the show is that the sepia toned drama we are watching is concurrently being hammered out on a technicolor Hollywood film lot. Adapting his latest detective novel to the screen, writer Stine (Anton Berezin) battles studio boss Buddy Fidler (Troy Sussman) and juggles women as he tries in vain to maintain his integrity, his marriage and his sanity.

Director Martin Croft makes deceptively effortless work of the knotted twin strands of plot, presenting crystal clear story telling that is as amusing at it is intriguing. An exemplar of Croft’s achievement here is the success of the lead up to the act one finale, as fictional Stone turns on Stine for caving in to rewrites, weakening the characters’ motivation. Croft has shaped the dual roles as fascinating complementary yet contrasting pairs, with another highly effective contrast coming in the delineation between stylized movie acting and naturalistic off screen scenes.

(Special mention to multi-tasker Theresa Borg, a Life Like Company producer and assistant director of City of Angels, who also had her own opening as director the night before with La Cenerentola.)

A massive part of the success of the evening is the fabulous 11-piece band, conducted by the redoubtable Kellie Dickerson. From smoky jazz to brassy big band, the musicians provide a thrilling accompaniment to the performance. Musical director Dickerson also delivers smooth vocals from the cast, especially the jazzy Angel City Quartet (Jennifer Peers, Melissa Langton, Andrew Kroenert, Connor Crawford).

Robert Alexander Smith’s set design provides a multitude of levels for the various locations, facilitating simultaneous scenes with flair. For a short run, the scenery is surprisingly extensive and is sturdily constructed to a high standard. Clever use is made of oversized venetian blinds, which allows lighting designer Tom Willis to play with atmospheric shadowing as part of his excellent lighting design. A plethora of period props, provided by Suz Cranny, add significantly to the quality of the production.

Kim Bishop delivers a deliciously stylish and accomplished period costume design. Costumes, along with wigs by Corrine Day, not only strongly support the storytelling and character work, but also add to the wondrous effect, supported by Willis’ lighting of portraying monochrome and technicolor on stage simultaneously. Alaura’s Marilyn-esque full white ensemble is a stunner, and millinery is also first rate. When the noir scenes are set aside for a glamorous old Hollywood party, the rainbow effect is dazzling. 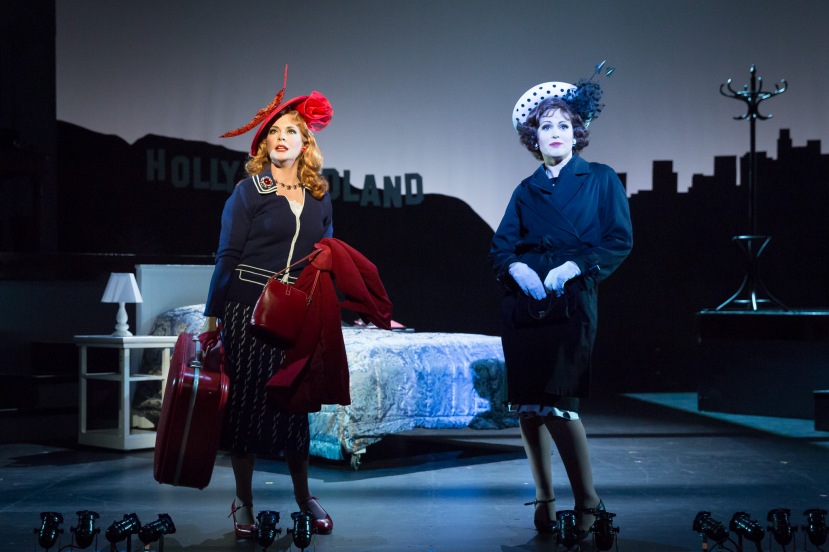 An example of the creative synergy achieved between script, performance, direction, costume, wigs and lighting comes when Harrison makes a stunning mid-song transformation from loyal detective agency secretary Oolie to sassy studio secretary Donna in act two’s “You can Always Count On Me.”

As the perpetually frustrated Stone, Berezin delivers truly stunning vocals, making one wonder why he isn’t the lead man of every single show. Blessed with a thrilling timbre to his rich tenor voice, Berezin delivers a knockout final note to every number.

Out of the leading lady spotlight for a little too long of late, Harrison is sensational as neat pair of secretaries Oolie and Donna, singing with trademark power and landing plenty of saucy laughs. Berezin and Harrison may be the most exciting music theatre combination we see on stage all year.

Representing a sexier leading man vision of Stine’s inner self, Alexander is very well cast as Stone. Handsome and suave, Alexander enjoys chemistry with each of his leading ladies, and sings with an attractive tone. 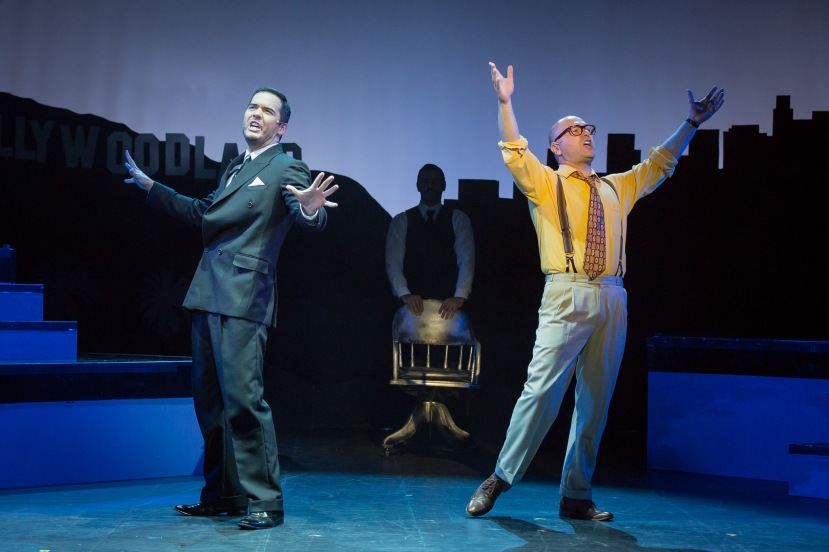 Wood oozes sensuality as wicked wife Alaura, and is in her element delivering withering zingers. Plumley creates two distinct characters, using a clipped East Coast accent as Stine’s weary wife Gabby and a breathless baby doll voice as Stone’s love Bobbi. Wood and Plumley both successfully carry their characters clearly into their songs. Wood’s “The Tennis Song” is packed with cheeky wordplay and Plumley’s “With Every Breath I Take” is a melancholic melody with the sound of a classic jazz standard. 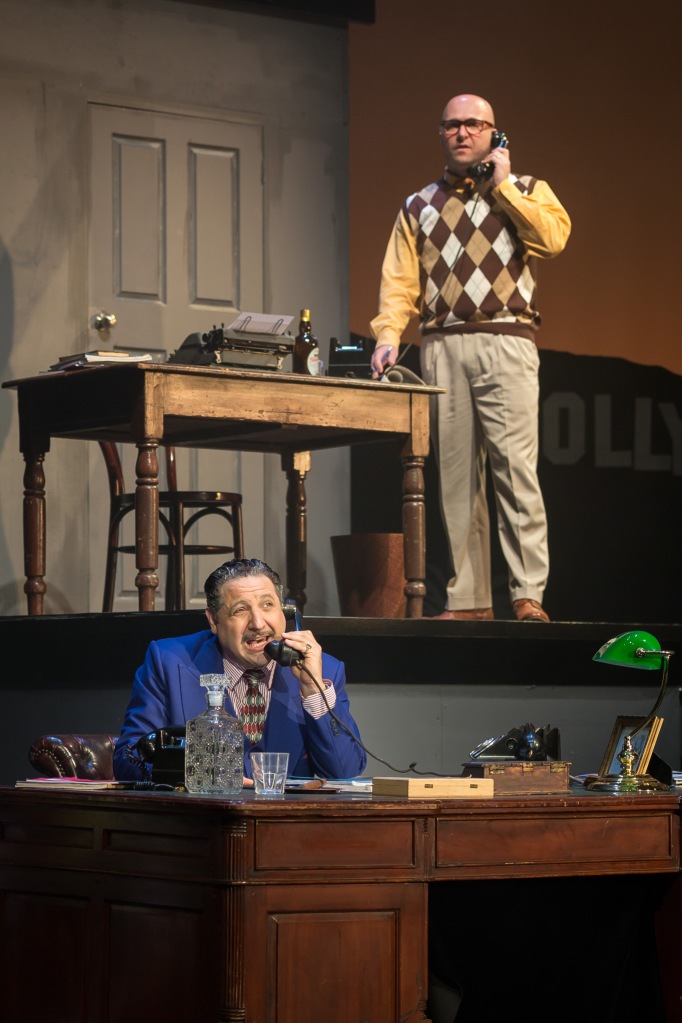 Rohan Browne is quality casting as smooth-voiced crooner Jimmy Powers, a role he contrasts effectively with the exotic Dr Mandrill. 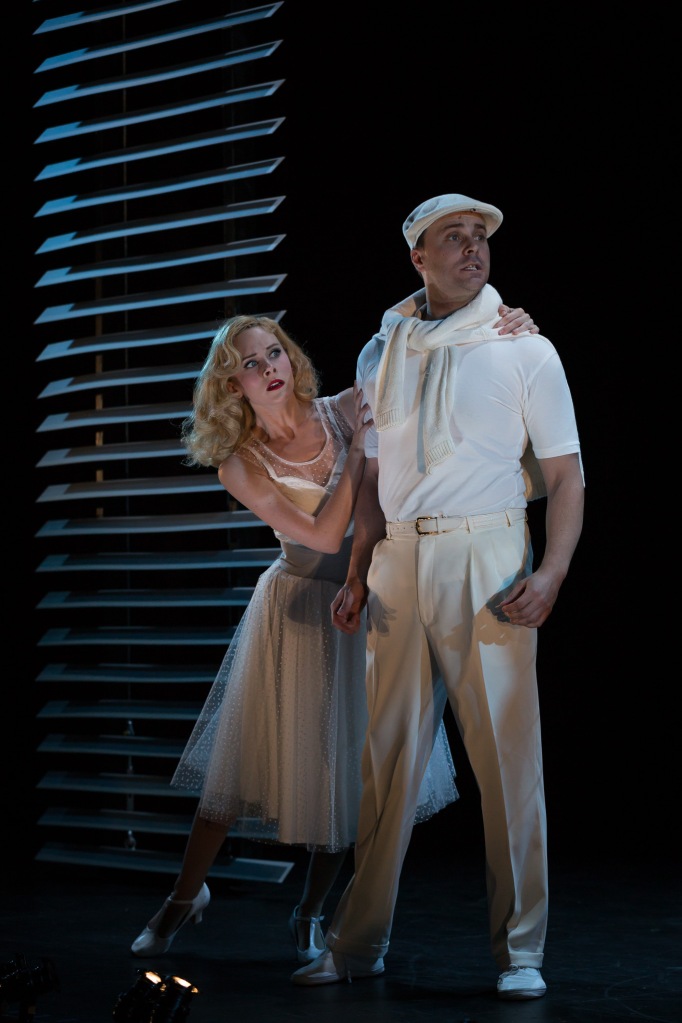 Experienced leading man Fiorentino is a hot in the character role of Munoz, landing a terrific production number near the end of act one with “All You Have To Do is Wait.”

Langton is the one to watch in the Angel City Quartet, and has a delightfully droll cameo as a corrupt Madam.

The Melbourne professional premiere of City of Angels has been well worth the wait. For local music theatre aficionados this is an absolute must-see.

Life Like Company looks set to continue their welcome trend of staging musicals that are as eagerly anticipated by casts as they are by audiences, announcing the Melbourne professional premiere of The Light in the Piazza for 2016. See you in Florence this time next year.