Ever the Big Men in Town, the Jersey Boys are back for their third Melbourne season and their music remains an energetic, infectious joy. 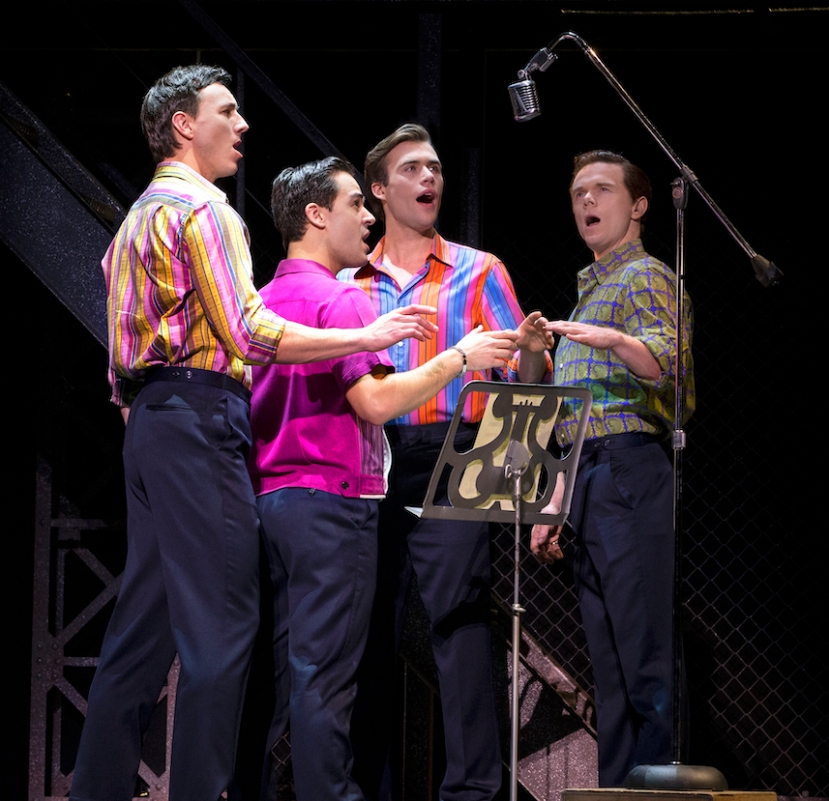 The gold standard of juke bio-musicals, the huge success of Jersey Boys is responsible for a slew of copy cat shows, a trend that is more prevalent than ever some 13 years after the show’s 2005 Broadway premiere. For every bona fide hit like Beautiful: the Carole King Musical and Tina: The Tina Turner Musical, there are cash grabs like Summer: The Donna Summer Musical, On Your Feet: The Story of Emilio and Gloria Estefan and Aint Too Proud: The Life and Times of The Temptations. Even The Cher Show, which shares one of the same book writers as Jersey Boys (Rick Elice), is an inflated bore.

Jersey Boys benefits from the killer combination of a compelling backstory and a catalogue of genuinely beloved hits, the majority of which were penned by band member Bob Gaudio and producer Bob Crewe. The masterstroke of Elice and co-writer Marshall Brickman is to only include snippets of songs, especially in the early years, until the arrival of the Big Hits. Early exposition fairly zips along, with plenty of one-liners to add to the enjoyment. 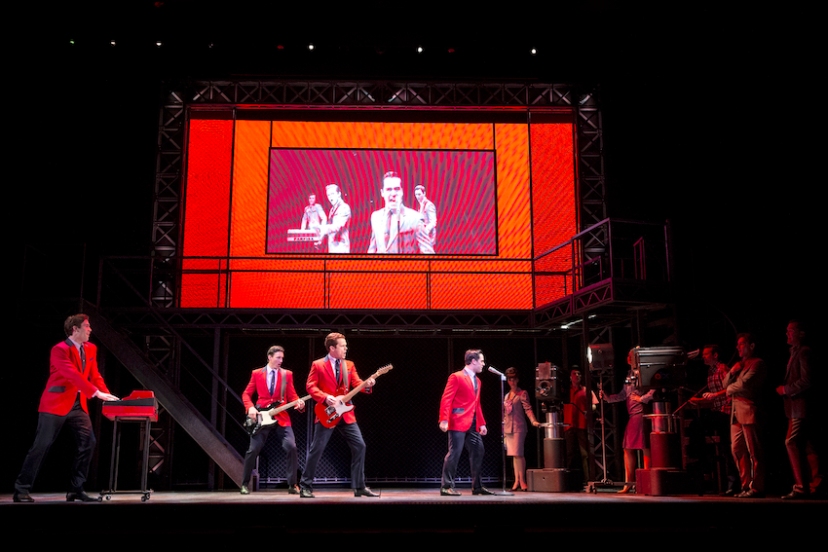 An impressive feat of this return season is the inclusion of talent from the 2009 and 2013 seasons. After serving as musical supervisor in 2013, original Australian conductor Luke Hunter returns to helm the band, joining Vicky Jacobs (keyboard/vocals) and Dave Hatch (drums). Glaston Toft deservedly owns the role of Nick Massi, with Enrico Mammarela also completing his third time round as Gyp de Carlo (and others). 2013 cast member Cameron MacDonald is promoted to the role of Tommy DeVito, while 2009 swing Luigi Lucente moves up to the role of Norman Waxman (and others) 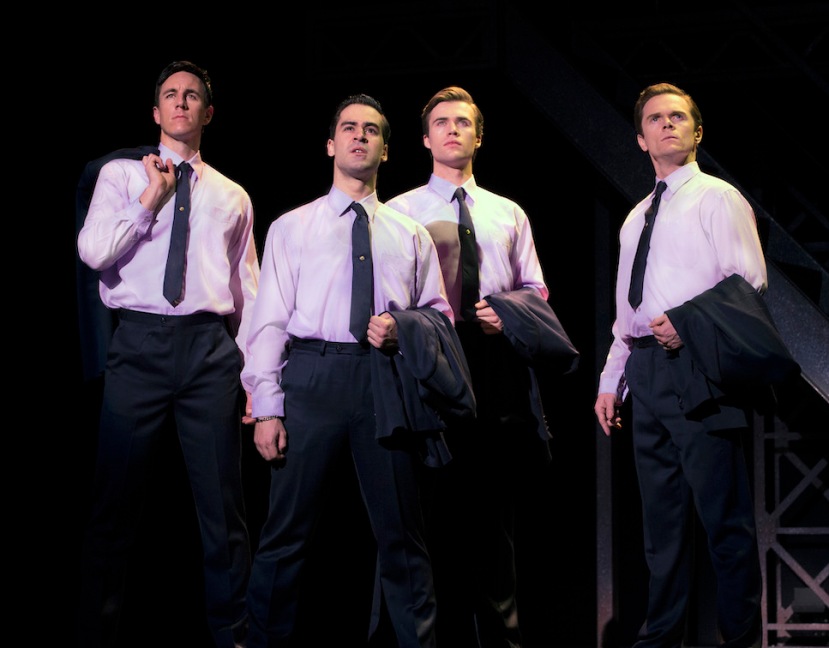 Although there is much affection for the music and sound of The Fours Seasons, producers of the current season are taking a bit of a gamble by placing a reduced production in a larger theatre. The set, down from three rear screens to one, is somewhat dwarfed by the mighty Regent Theatre stage. The music is compromised by reducing the band from ten players to seven, omitting the trumpet and two reeds. Still, associate sound designer Julian Spink and associate lighting designer Hugh Hamilton have the show sounding and looking grand, filling the vast auditorium with music and colour.

Ageless “veteran” Glaston Toft matches Massi’s bass guitar music with mellifluous bass voice, as commanding in dialogue as it is in song. Unsurprisingly, Toft has the comic timing of Massi’s dour outlook timed to perfection.

An exciting aspect of the return season is the showcasing of new and up and coming stage talent.

Depsite the equal sharing of narration, the structure of Jersey Boys allows Frankie Valli to naturally emerge as the star, as Frankie has the final “season,” when the singer goes on to become a legend in his own right. To say that Ryan Gonzalez fulfills this aspect of the role would be a massive understatement. Despite all the talent of his co-stars, Gonzalez somehow melts their memory away as the show tightens its focus on Frankie. Gonzalez gives a masterclass in understated acting, bringing the audience to him so strongly that you could have heard a pin drop when Frankie’s darling daughter Francine passed away. Gonzalez nails Frankie’s sky-high vocal range with seemingly effortless ease, also performing the choreography with debonair flair. This is a sensational star turn that is a key attraction of the current season.

In his biggest role to date, established stage presence Cameron MacDonald plays squarely against type as egotistical narcissist Tommy DeVito, successfully playing the role with unflinching villainy and singing with better vocals than the character even (arguably) deserves. 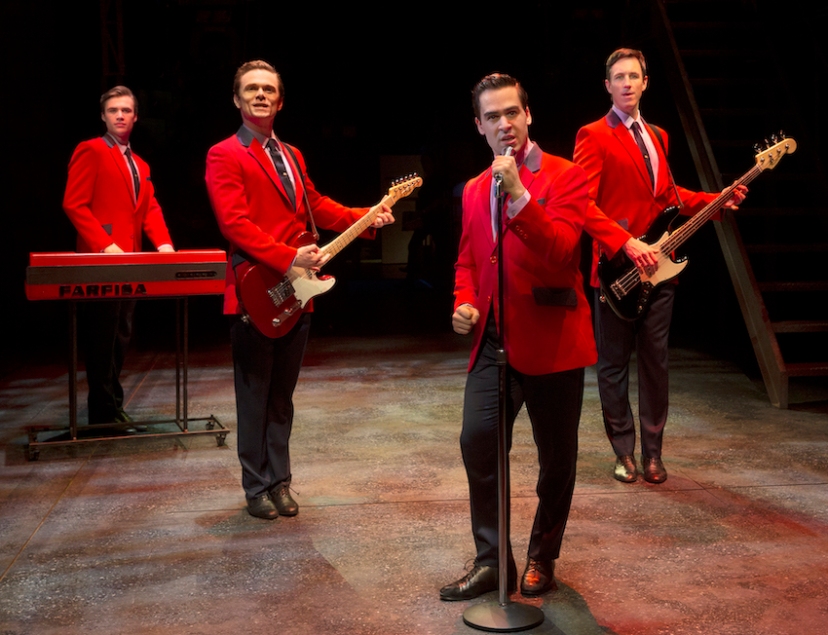 Glenn Hill keeps the camp affectations of producer Bob Crewe to a tasteful medium. Luigi Lucente brings authentic gravitas to mob moneyman Norm Waxman. Hill and Lucente are particularly successful at changing their appearance and body language in a range of other roles.

Bright eyed Scott McConnell is good value in a variety of supporting roles. Likewise, Josh Mulheran is at his exuberant best as Joey (Joe Pesci), also adding value in other ensemble roles.

Enrico Mammarella completely inhabits the role of weary Jersey mob identity Gyp DeCarlo with consummate ease. Rutene Spooner brings a lively presence to the stage whenever he is featured, beginning with his role as the French Rap Star at the very top of the show. 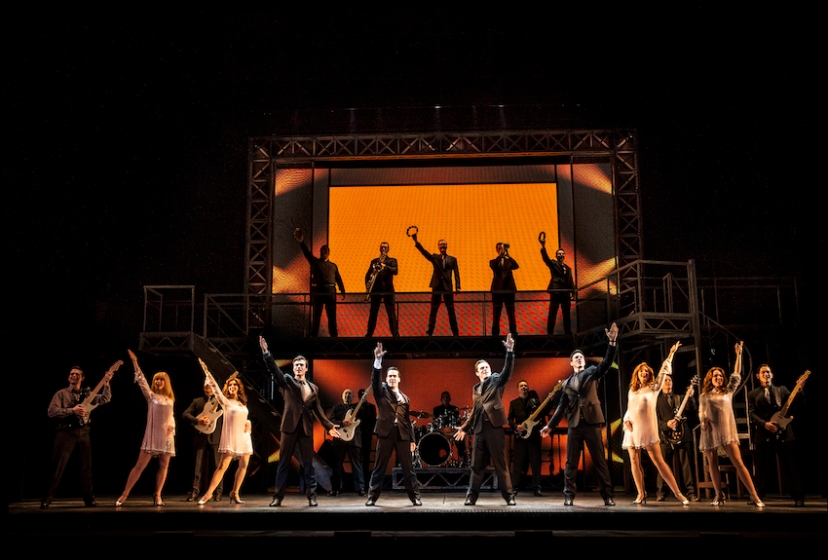 Standing out amongst the three talented female cast members is relative newcomer Mia Dabkowski-Chandler, who is playing the collection of roles that brought Verity Hunt-Ballard to the spotlight in 2009. Dabowski-Chandler shows off her terrific vocal prowess in the recording booth as Miss Frankie Nolan, later fleshing out the small but significant role of reporter Lorraine in memorable fashion. 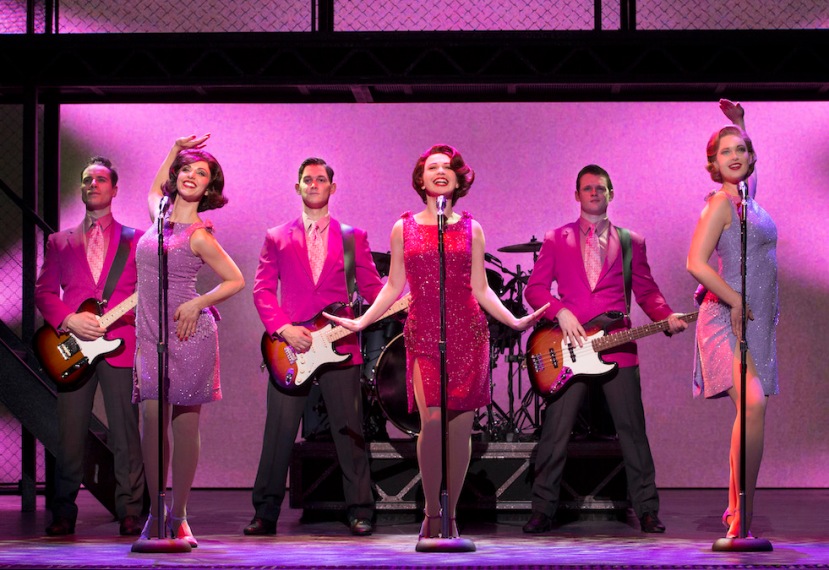 Newcomers to Jersey Boys are sure to enjoy the memorable music and terrific stage talent. Those who have seen the show (possible more than once) may be harder to coax back, but the performance of Ryan Gonzalez is certainly a compelling attraction.