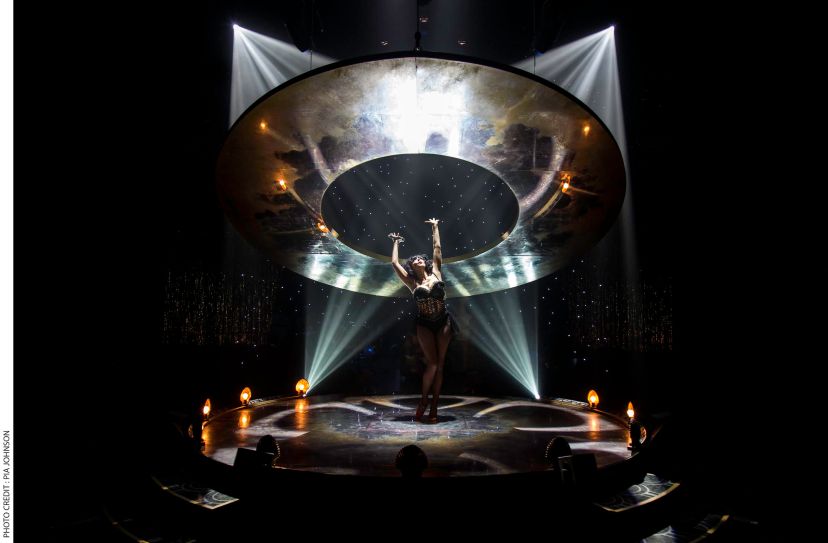 The lights dim as a fragile figure totters forth, hair strewn with tiny party popper crepe streamers from the night before. Removing her fur, to, decadently, reveal another beneath, she sits and sobs upon a rock, telling us that this is a show about happiness.

With the Merlyn Theatre seating reconfigured into a U shape, we cocoon our goddess-like heroine on three sides, agog at the adventures that unfold with chaotic abandon. In fact, if there is a key element to Meow Meow’s successful creation here, it is this authentic feel of reckless spontaneity that runs through the seventy-minute performance. The audience is never permitted to sit back and relax in the manner that characterises lesser, middlebrow offerings.

While there is a (deliberately) painful sequence that is close to the central premise of Hans Christian Anderson’s The Little Mermaid, the concept is mainly a starting point for all things aquatic. Meow Meow swims elegantly overhead, marches about in flippers, swooshes about in a mermaid tail and, in a boldly courageous manoeuver, crowd surfs her way around the auditorium.

Flipping from sweetly polished tones reminiscent of a young Joan Collins to snarkily judgmental sideswipes of frustration, Meow Meow keeps the audience on their toes, so that they are afraid not to happy to participate, respond and react as required.

A particularly extraordinary aspect of Meow Meow’s talent is the power and range of her singing voice. Breathless French, guttural chest voice and bell-like soprano head voice are all part of her repertoire. Accompanied by five terrifically talented musicians, who are listed in the program as The Siren Effect Orchestra, our muse performs a range of carefully selected songs from the likes of Kate Miller-Heidke and Iain Grandage. Only one element of a show that includes comedy, acrobatics and paths, the incredible singing certainly leaves the audience wanting more.

A tale of love must involve a male counterpart, and Meow Meow receives wonderful support from Chris Ryan (her co-star for the London season of Meow Meow’s Little Match Girl). Buff actor Ryan is convincing as a straight-talking techie and later shows effortless flair in a singing and dancing duet as the Little Mermaid’s dream man.

While Meow Meow has devised the show herself, she has wisely involved a dramaturge, Tom Wright, as well as highly experienced director Michael Kantor, comedy director Cal McCrystal and choreographer Kate Denborough. Such a level of collaboration has no doubt contributed to the assured sparkle of the finished product.

No review can really do justice to the live effect of this show. Intrepid theatregoers are encouraged to experience the magic of Meow Meow’s Little Mermaid for themselves.