Utterly charming and original, new Australian musical Ladies in Black is cause for celebration.

Nurtured and delivered by two state theatre companies, whose core business is straight plays, the surprise in the success of Ladies in Black is not so much that this happened at all but that it does not happen more often. Overseas, the subsidised or nonprofit theatre realm is often a melting pot for new music theatre work. Following this pattern, Ladies in Black should now be picked up by some lucky producer for a healthy commercial run. Fingers crossed that this will turn out to be the well-deserved outcome in this case.

While there are an infinite number of variables that have to fall into place for a successful new musical, the score is paramount. Ladies in Black not only skips the most common source for new musicals in Australia (the “jukebox”) but also significantly improves upon recent high profile new musicals King Kong and Strictly Ballroom by having the distinct voice of a score written by one composer.

In turning his hand to music theatre, Tim Finn joins a league of popular music writers turned musical composers that includes the likes of Elton John, Tim Minchin and Cyndi Lauper . Decades of experience in writing catchy hooks and narrative lyrics bear great fruit here, with a score that is enjoyably accessible on first listen. The snappy lyrics are witty, with many laughs coming from the delectable rhymes.

Stephen Sondheim’s Finishing The Hat may be a little aspirational for Finn’s sole background reference in his composer’s note, but he does acknowledge how high this sets the bar. And what Finn accesses here is an authentic Australian vernacular that only a local songwriter could achieve. Songs such as “He’s A Bastard” and “I Just Kissed A Continental” are a perfect tonal match for Carolyn Burns’ breezy book, the whole affair viewing 1950s Australia in a sunny, if not entirely rose-coloured, light.

The extensive experience of music theatre director Simon Phillips, also credited as dramaturg, has clearly been integral in shaping the work as a piece of music theatre. Finn delivers the requisite spread of songs, from establishing numbers, I wish songs, I am songs, patter songs, charm songs, ballads and production numbers. There is no climactic 11 o’clock number, just a reprise of “Can’t Wait until Tomorrow Becomes Today” as the characters, current issues resolved, continue to look to the future.

Based on Madeleine St John’s 1993 novel The Women in Black, the musical tells a snippet of the coming of age of a nation while ostensibly focusing the coming of age of intelligent young Lisa Miles. Working at David Jones Goodes department store the summer after finishing her Leaving certificate, Lisa’s excellent academic education is enriched with broader life experience as the stories behind the austere black outfits of her new workmates unfurl.

Burns’ text deftly avoids the cultural cringe while shining a light on the expanding horizons of 1950s Australia. Entrenched sexism is mocked, and subtle points are made about overcoming the ongoing intertwined fear and racism against refugees. With Phillips’ input, the story is economically told with only ten actors. The doubling (or tripling) of roles works well, except for one anticlimactic sequence in which we do not actually see Magda’s New Year’s Eve party. Overlapping scenes, dream sequences and scenic dissolves are all handled with a supremely modern fluid touch.

Under David Young’s musical direction, the band sounds richer than only six players. This can be credited to clever orchestrations from master musician Guy Simpson.

Gabriela Tylesova’s scenic design is based on seven Perspex pillars, with a good portion of the budget perhaps going on the three stage revolves. Tylesova’s costumes are reliably sumptuous, providing a range of highly attractive cocktail and designer gowns. Featured gown the “Lisette” delivers a dreamy Cinderella moment. 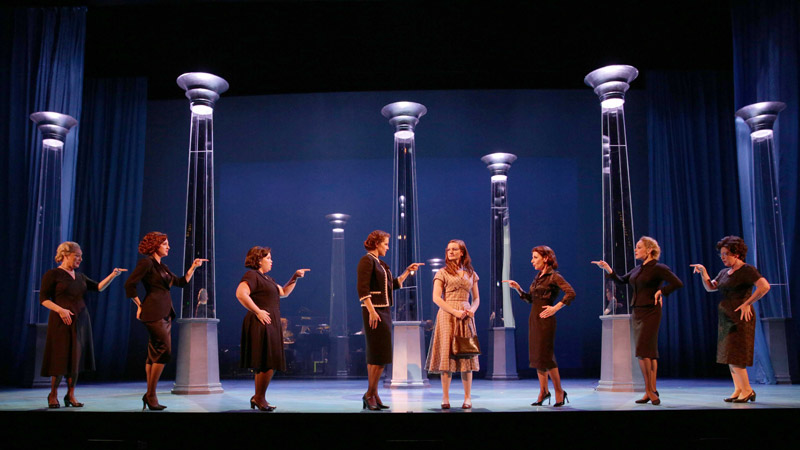 Christen O’Leary makes a welcome return to the Melbourne music theatre stage as the exotic Magda. While some of the sales ladies dismiss Magda as “continental,” Lisa discovers the warmth and creativity of Magda and family. O’Leary radiates Magda’s generosity while maintaining an intriguingly mysterious air.

The role of the gentle, sweet ingénue (think Cosette or Hope Harcourt) is a challenging one to make interesting. Sarah Morrison gives a lovely performance as Lisa, singing sweetly and forming genuine relationships with the women around her.

Experienced singing actress Lucy Maunder utilises her considerable talent to convey a large backstory to Patty, fleshing out the pain of young married woman whose marriage is threatened by fertility issues.  As Patty’s rather feckless husband Frank, Andrew Broadbent expands the role from a potentially one dimensional louse to a sympathetic, or at least understandable, man.

Naomi Price imbues the lovelorn Fay with a perky sense of hope. Bobby Fox is a great asset as the dapper Rudi, crooning a couple of comic ballads and fitting in some slick, fleet footed dance moves. 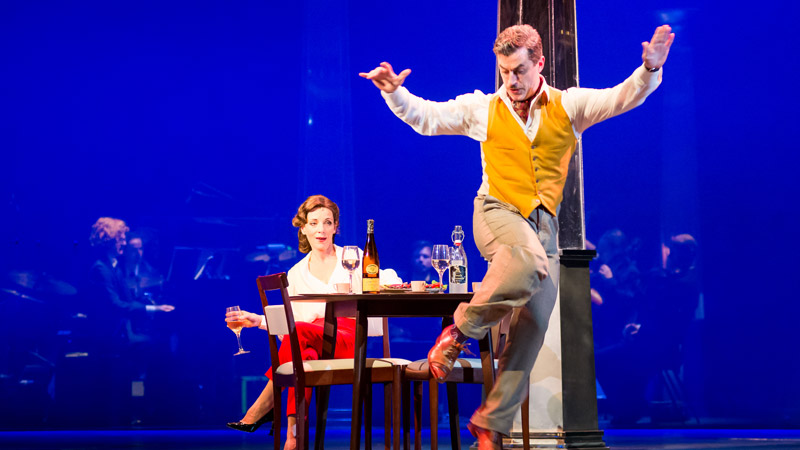 Deidre Rubenstein creates the beautifully sympathetic role of lonely Miss Jacobs, bringing a distinct tenderness and kindness in her voice.

Ladies in Black plays at The Sumner, Southbank Theatre, Melbourne until 27 February 2016.