Lightly comedic thriller North By Northwest looks glossy and grand in the larger space of the State Theatre. 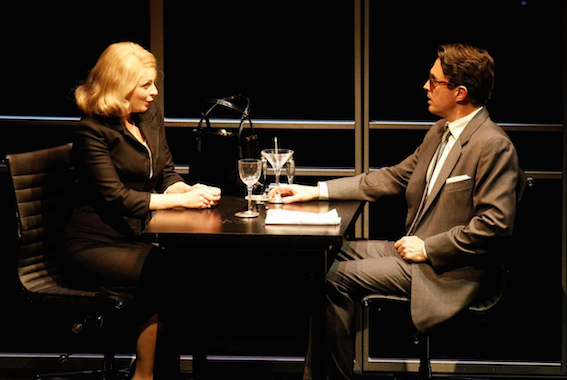 Premiering last year as part of MTC’s regular season, the play’s status as a popular hit led to this commercial breakout season. Though no further dates are listed at this stage, the show seems a natural choice to tour. Looking further afield, this is the kind of clever concept and unique staging that New York and London audiences would flock to see.

Alfred Hitchcock’s famous 1959 film is adapted for the stage by Carolyn Burns and directed by Simon Phillips, a pair who is currently well represented in Southbank. Adapting Ernest Lehman’s screenplay for the stage, Burns re-tells the spiraling drama of mistaken identity with a dash of levity, solving the knotty problem of casting by assigning scores of roles to only 12 actors.

Besides presiding over intricately choreographed, frenetically paced scenes and scene changes, Phillips’ masterstroke is his concept for the live creation of special effects throughout the show. Cast on side stage manipulate small scale vehicles, backdrops and props in front of cameras, and the resulting footage is then beamed on a large scale to the towering rear screen. Far more than a gimmick, the idea is immensely entertaining and thoroughly satisfying. Part of the success is due to the variety of effects achieved, with the central crop duster chase a highlight and the evocation of Mt Rushmore a cheeky delight.

While the side stage effect work may be hard to see clearly from further back in this massive theatre, the idea should remain clear and the massive projections are easy to see. One benefit to sitting a little further back is the delineation of roles played by the same actors; with the faces not quite as clear, the wigs, costumes and accents help to create multiple characters more easily.

Nick Schlieper’s lighting pinpoints where to focus on the large and busy stage. Crisp sound design, by Terry McKibbin, allows every word to be heard with ease (besides, of course the crucial explanation of villainous Vandamm’s work, which is drowned out by plane propellers). 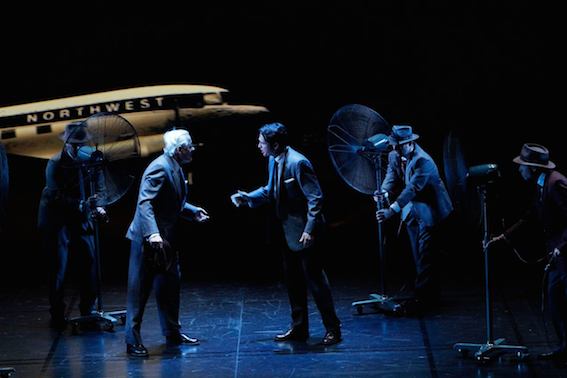 Phillips and Schlieper’s set design is a flexible series of gleaming panels of glass-like perspex. Given the see-through nature of the set, it would have helped sightlines if the front masking (which compensates for the size of the set on the bigger stage) was also see-through rather than solid black.

As harried advertising executive Roger O. Thornhill, Matt Day is a terrific leading man, confidently and convincingly portraying the character’s increasing ingenuity and skill while on the run.

Amber McMahon keeps the secrets of cool Hitchcock blonde Eve Kendall safe until they need to be known. Matt Hetherington purrs Vandamm’s lines with the non-descript European accent of the best of the Bond villains.

Gina Riley adds a merry feel to her characters, amusing particularly as Thornhill’s bridge-playing mother. Lachlan Woods has the chiseled jaw of an old-time Hollywood movie star and the threatening intensity of a no-nonsense henchman.Tony Llewellyn-Jones brings quiet class to The Professor.

Further members of this strong ensemble cast each have their moments on stage and side stage: Nicholas Bell, Ian Bliss, Lyall Brooks, Leon Cain, Sheridan Harbridge, and Lucas Stibbard.

North By Northwest is recommended for theatre audiences and theatre students alike.