In a splendidly sung and acted performance, revered historical musical 1776 is given the Hamilton multi-racial casting treatment at New York City Center Encores!. 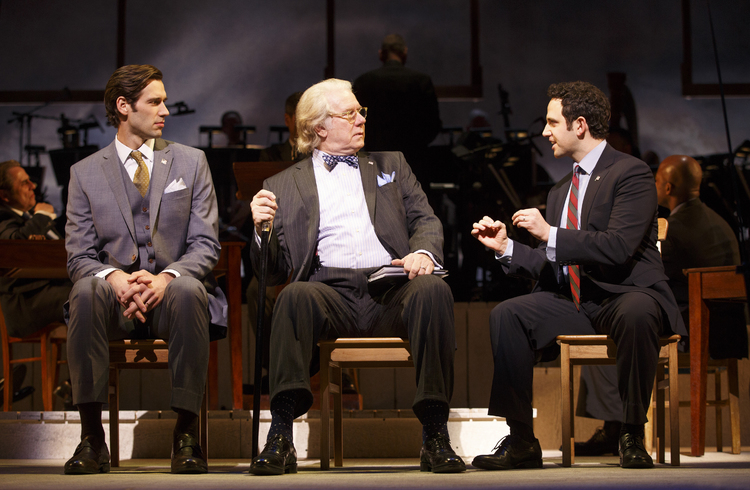 Melbourne institution The Production Company began from the inspiration of City Center Encores!, but its growth in length of seasons and sophistication of presentations appear to have left Encores! behind in the dust. The cast of 1776 wears modern dress and performs all scenes on the same basic set of chairs. Furthermore, actors carry scripts and use them for their dialogue in some scenes.

The gimmick of colour-blind casting works to a fair degree, but lacks some power simply because it so obviously derivative of the innovation of Hamilton. There is certainly merit, however, in presenting the 1969 work at this time as it is a strong companion piece to Hamilton, fleshing out many of Hamilton’s key character’s and providing details to the event that kick starts Hamilton’s narrative.

Although Peter Stone’s book is very wordy for a concert (one scene runs 30 minutes without a song), the chance to hear Sherman Edwards’ marvelous score played by the 29 piece Encores! Orchestra and sung by such fine voices is a definite attraction. Top marks to music director Ben Whiteley for his excellent preparation of musicians and singers alike.

The plot focuses on a sweltering summer in Philadelphia where the men of Congress debate the writing and signing of the Declaration of Independence. For a story whose outcome is known, Stone generates plenty of tension and conflict.

Without adding a word, director Garry Hynes makes some strong points about the current efficacy and pace of US Congress. The 26 characters of the ensemble company are clearly established, and the moments of character-based humour land many appreciative laughs.

Edwards’ score is a terrific collection of melodies and styles, with his songs breaking up the action in a entertaining manner and providing illuminating aspects of characters. Songs range from anthem (“For God’s Sake, John, Sit Down” to patter “But, Mr Adams” to comic “The Lees of Old Virginia” to highly romantic (“Till Then,” “Yours, Yours, Yours”) to ballads (“Momma, Look Sharp”).

As bombastic chief protagonist John Adams, Santino Fontana (Cinderella) is in superb voice, commanding the stage in numbers such as “Piddle, Twiddle” and “Is Anybody There?.” 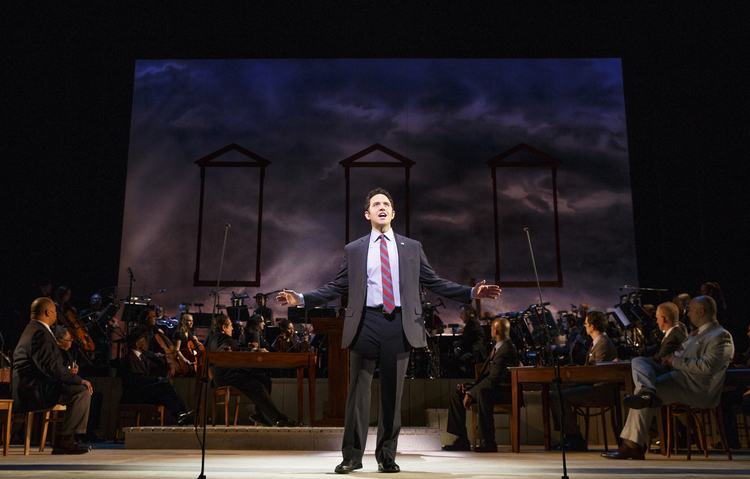 Fontana has the chance to show Adams’ tender side in correspondences with his wife Abigail Adams. These highly romantic duets are beautifully sung by Fontana and Christiane Noll. Noll sports the oddest costume choice of the night, wearing outdoorsy jeans, plaid shirt and vest, an ensemble that seems at odds with her feminine, conservative character.

In perhaps the most traditional piece of casting of the night, John Larroquette plays respected elder Benjamin Franklin with gentle authority.

Jubilant Sykes lives up to his christian name with a lively rendition of Richard Henry Lee’s “The Lees of Old Virginia.”

John Behlmann gives something of a breakout performance as Thomas Jefferson, a role that slowly comes to the fore as Jefferson’s involvement in writing the declaration of independence comes to light. As a virile young man who misses his wife, Behlmann is very convincing. Nikki Renée Daniels takes a brief break from her current role in The Book of Mormon to play Martha Jefferson, singing sweetly of her love for her husband in the gorgeous romantic ballad “He Plays The Violin.”

Act one seems over after this showstopper but Edwards has one more surprise as the court courier sings “Momma, Look Sharp,” a deeply moving ballad about life and death on the battlefield.

Alexander Gemignani (Violet) lands the strongest solo number of the evening, as Edward Rutledge of South Carolina vehemently argues that slavery benefits both North and South in “Molasses to Rum.”