Given the success of the novel and film on which it is based, American Psycho the Musical should be a tense and amusing satire thriller, so the limp, unaffecting result is a disappointment.

Reading back over my review for the London season of American Psycho, I found the show to be exciting and fresh. The music, book and production have barely changed in the intervening two years, leading to the question of what has gone wrong.

The London season was off-West End, way off-West End at the trendy Almeida Theatre in Islington. The funky, immersive space put the audience in a frame of mind that is not suggested by the bright lights, and high prices, of Broadway.

Playing Wall Street investment-banker-come-serial-killer Patrick Bateman, London’s Matt Smith had a wicked smirk and devilish gleam that brought the audience into his world where he then simultaneously shocked them, thrilled them and laughed with them.

Broadway’s Benjamin Walker looks the part, with an even more spectacular buff, hairless Ken doll body. To be fair, it should be mentioned that the show is still technically in previews, but Walker does not have the magic connection with the audience. Subsequently, there are no shocks at what Patrick does, little or no laughs at his dialogue and no tension at all about whether he will get caught. It is a massive role and Walker may take time to develop the confidence required.

On a similar note, the ensemble cast members all seem to have been cast for their looks. The muscular, athletic male and females physiques are frequently put on display, but the interchangeable performers are not capable of any sort of quirky or interesting characterisation in their brief speaking roles.

Worse, and this is the fault of the creative team, the use of the ensemble in songs is on the same pointless level as Ghost the Musical, in that the performers are just bodies moving jerkily in place as if in a music video clip.

Katrina Lindsay’s costumes are slick and glossy, but the 1980s aesthetic, and related humour, is not taken anywhere near far enough. The clean white walls and twin revolves of Es Devlin’s scenic design suit the clinical vibe, but the lack of depiction of most of the actual locations makes the story seem like it is happening in a vacuum, further reducing the stakes. 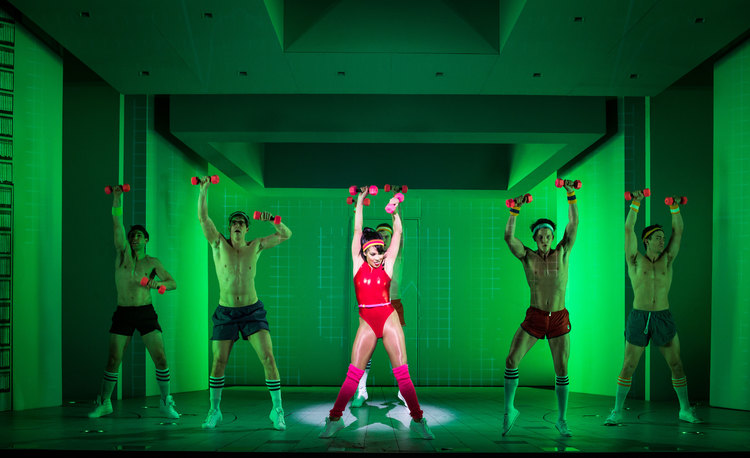 Two actresses who acquit themselves with class are Alice Ripley, in the camp role of Mrs Bateman, and Jennifer Damiano, who brings a quiet presence to the role of Patrick’s burgeoning assistant Jean. Amidst the chaos, Damiano nails the 11 o’clock ballad “A Girl Before,” finishing her arc as the one character to earn any audience affection.

Duncan Sheik’s score includes a smattering of 1980s pop hits that had a high profile and significance in the 2000 movie. The original songs, which make up the bulk of the score, are often atmospheric but mostly forgettable.

The recognisable title, eye candy cast and pop music score may attract some threatregoers. Ultimately, even the least discerning patrons are likely to see through a hollow product, especially at Broadway prices.