Superb direction and electric performances makes this presentation of Follies in Concert far more than a rose-tinted trip down memory lane. 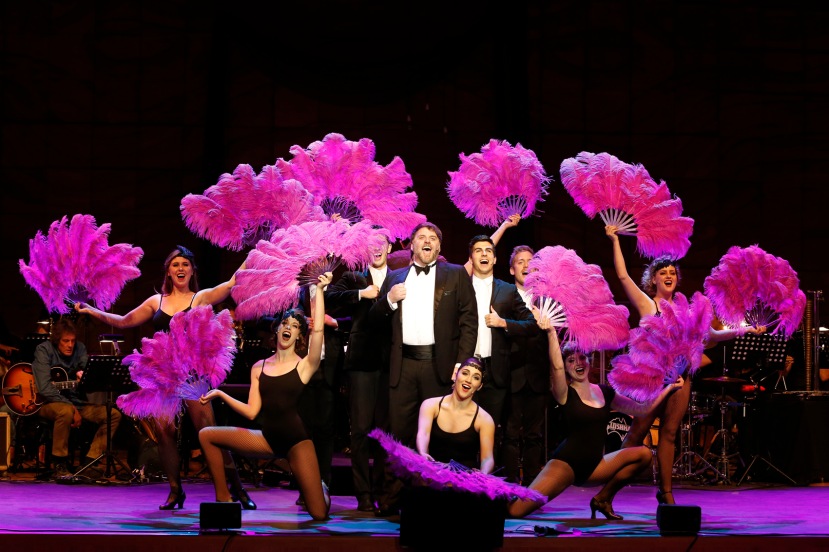 One of Stephen Sondheim’s most luscious, melody-packed scores, Follies is very close to the heart of many a music theatre devotee. As well as the usual intricate, psychological, fiendishly difficult Sondheim songs, there are a host of glorious pastiche numbers, written to recreate the highly hummable songs of vaudeville and revues.

At a thirty-year reunion to farewell the soon-to-be-demolished theatre, a gaggle of aging showgirls gather to reminisce about their heyday in the Weismann Follies. James Goldman’s book focuses on the central love quadrangle of Sally, Buddy, Phyllis and Ben, as well as providing snippets of anecdotes for the supporting characters, who enliven proceedings with their nostalgic hit tunes.

Apart from a fabulous collection of stars, this season of Follies (the fourth that I have seen in Melbourne) is set apart by the crystal clear, and highly affecting, storytelling. With limited stage space, no sets or props and just modern evening wear as costumes, Tyran Parke’s direction brings the pain and regret of the central two middle-aged couples vividly to life. 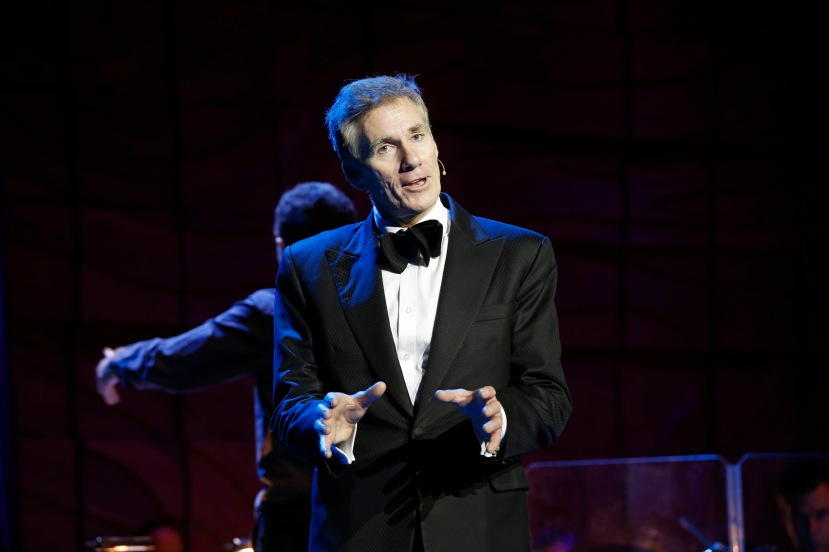 While it is usually the pretty young leads who do all the kissing and hugging in musicals, Follies features passion and longing from real adults, each played brilliantly here. Sally (Lisa McCune) hopes the party will provide the chance to escape her dull husband Buddy (David Hobson) and reunite with Ben (Philip Quast), who is married to Phyllis (Anne Wood). Act one ends with an extraordinarily romantic performance of duet “Too Many Mornings” from Quast and McCune, leaving Sally to finally get her kiss from Ben as their respective spouses watch. 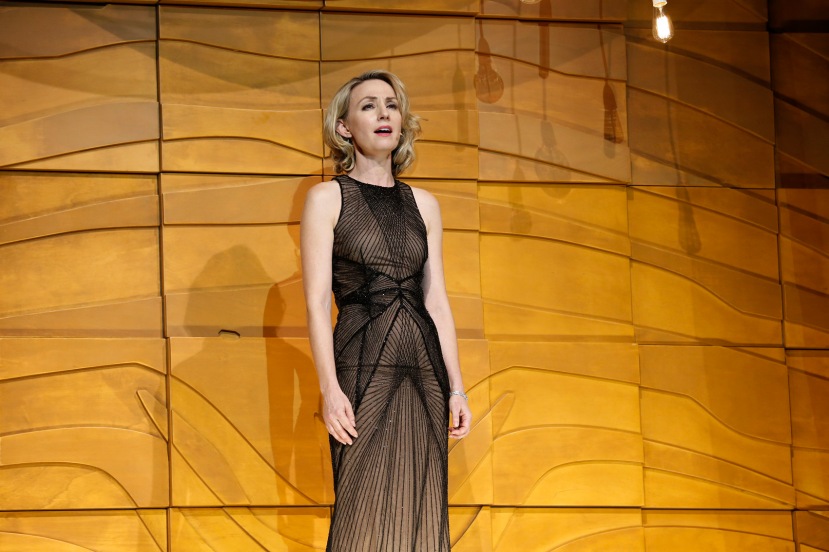 Parke makes excellent use of the younger “ghosts” of the adult characters, particularly in the dissolve to fantasy sequence “Loveland,” in which the older characters angrily berate the four younger incarnations for the mistakes they made with their lives. 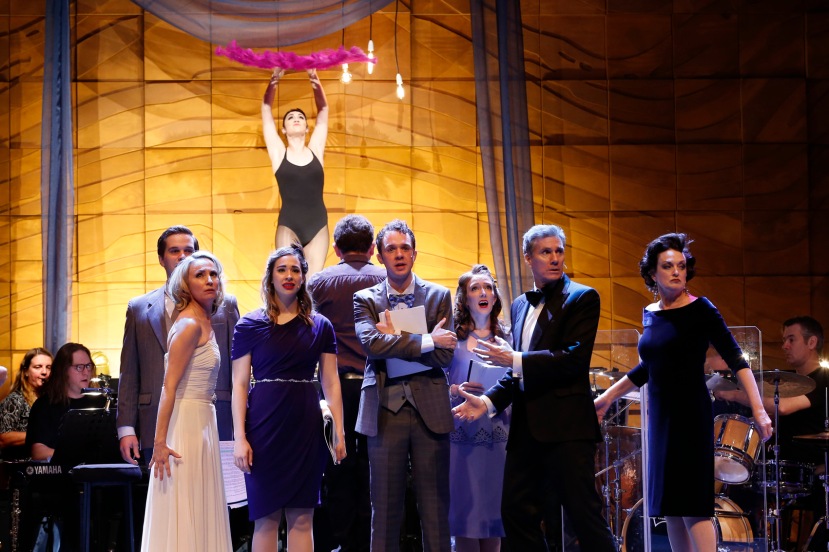 The resounding impact of the subsequent breakdown of each character during Loveland makes the sequence far more than a showcase for the actors. Hobson surprises with a lively vaudevillian turn in “Buddy’s Blues.” McCune brings a haunting stillness to “Losing My Mind.” In sparkling red gown, and surrounded by a whole bunch of boys, Wood sizzles as she sings “The Story of Lucy and Jessie.” Quast is devastatingly convincing as Ben stumbles his way through “Live, Laugh, Love.”

Looking winsome and petite, McCune portrays the vulnerability fragility of Sally and her driven, blinkered love for Ben. Turning on the charm when Buddy is in public view, Hobson also shows the dread and boredom Buddy carries. Looking as glamorous as a star from the Golden Age of Hollywood, Wood spits out withering zingers as Phyllis, continuing that style as she sings her shattering ultimatum to Ben, “Could I Leave You?” Singing with his sumptuous burnished baritone, Quast conveys the hollow disillusionment of a man who has everything and nothing simultaneously.

The only actress to feature in all four Follies stagings seen in Melbourne, Margaret Haggart sings “One More Kiss” with exquisite delicacy, supported beautifully by the powerful high notes of Madeleine Featherby as Young Heidi.

A series of toe-tapping tunes are heard in quick succession in act one as party guests let loose with their trademark numbers. A sparkling Patti Newton tries to carry Emily and Theodore’s “Rain on the Roof,” but is let down by a stiff Bert Newton not pulling his weight. Natalie Gamsu brings European flair to Solange as she sings “Ah, Paris!” Legendary performer Nancye Hayes imbues Hattie with a devilish twinkle, bringing down the house with “Broadway Baby.” 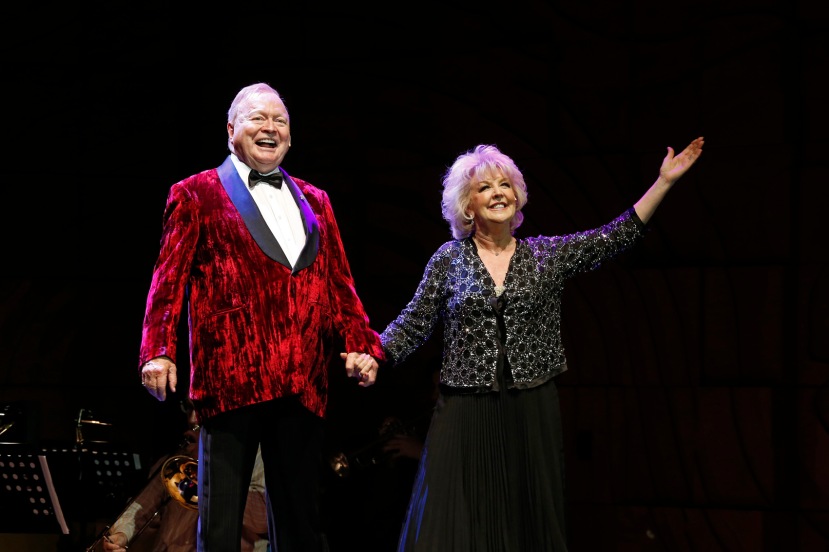 The act one highlight, and arguably the highlight of the night, comes as the women try to perform a favourite old company number. Vocal powerhouse Queenie van de Zandt leads showstopper “Who That’s Woman” with a merry sparkle, imbuing the lyrics with their full meaning. Visualizing themselves in their youth, the eight older women are joined by their younger counterparts, and Kelly Aykers’ wonderful tap choreography builds to its zenith.

Musical director Stephen Gray leads a sterling orchestra of 24 musicians, which performs on stage behind the actors. Sondheim’s score sounds thrilling with this lavish treatment.

The first full production for Storeyboard Entertainment, the high quality of Follies in Concert augurs well for future seasons. For a show that can often be just a featherlight collection of great tunes, the layers of meaning exposed by Parke’s direction add significantly to the attraction of this starry staging.