The commercial season began way back in early January with a new revival of Fiddler on the Roof headlined by Australian music theatre superstar Anthony Warlow. 2011 UK revival Singin’ in the Rain commenced its Australian tour in Melbourne. The departure of leading man Adam Garcia was no loss; in fact, it provided the welcome chance for local trouper Rohan Browne to step up to complete the Australian tour.

Aborted as an Australian tour after its disastrous reception on Broadway in 2012, fantastical London hit Ghost finally made it to our stages with charismatic leads Rob Mills and Jemma Rix diverting attention from the musical’s inherent flaws. A popular hit on Broadway and the West End, Kinky Boots (below) received a similar level of adulation in its Australian premiere, leaving Melbourne audiences on a high after each performance.

The charms of Tony-winner Avenue Q have not faded, as evidenced in a beautifully sung revival that enjoyed a brief season at Her Majesty’s Theatre, Melbourne this year before transferring to Perth. On the other hand, the limited appeal of Queen musical We Will Rock You appears to have well and truly expired.

Destination NSW’s campaign to host premiere seasons in Sydney paid dividends this year. New Disney stage adaption Aladdin, already a hit on Broadway and the West End, flew into the Capitol Theatre for a similar reception. Now if I could just work out how that magic carpet works. New Australian musical Dream Lover played an exclusive season at Sydney’s Lyric Theatre, where David Campbell’s sensational performance as crooner Bobby Darin helped to make the bio-musical a crowd pleaser. Living legend Julie Andrews directed a meticulous recreation of the original Broadway production of My Fair Lady (below), which broke ticket sale records at Sydney Opera House.

Melbourne independent outfit StageArt continued to make a stellar name for themselves, presenting affordable seasons of rarely seen musicals. After restaging their 2015 hit In The Heights on the vastly larger stage of the National theatre, the company returned to Chapel off Chapel for a tightly choreographed staging of West End dance musical Saturday Night Fever. Next up was an outstanding presentation of the chamber musical version of 1997 Broadway Tony-winner Titanic. The gorgeous music, talented ensemble cast and brilliant direction of James Cutler attracted Man in Chair to make three viewings. Bolstered by great word of mouth about the current Broadway revival, the company enjoyed sold out success with The Color Purple, (below) in which Jayme-Lee Hanekom (Celie) brought the house down every night. 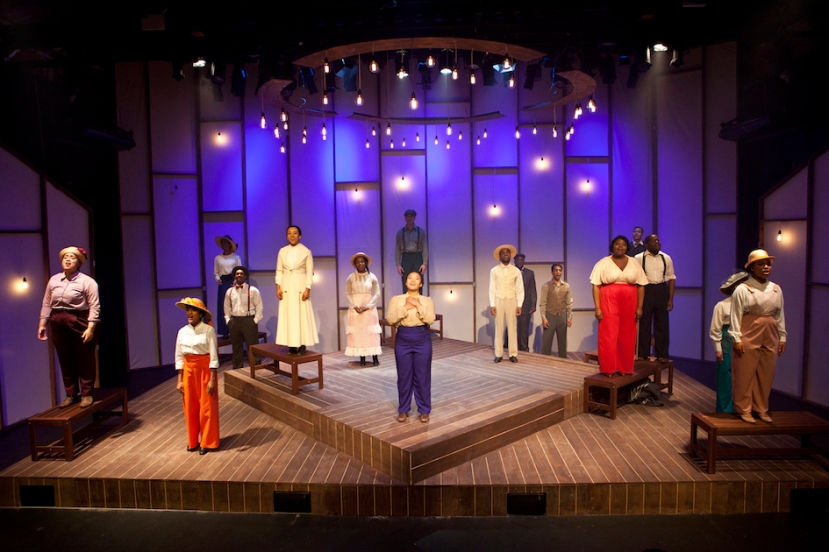 Another Man in Chair favourite finally received its Melbourne professional premiere when Life Like Company presented a polished production of The Light in the Piazza (top photo). By contrast, only a couple of days earlier, Room 8 let down fans of Godspell with a low budget, overly streamlined version.

2016 was a grand year for new Australian musicals, beginning with the highest profile premiere, Ladies in Black (songs Tim Finn, book Carolyn Burns) (photo below). Beginning a show in the subsidised theatre realm then moving it to the commercial domain is common practice overseas, so it is great to see it happen here.

Man in Chair’s servers almost went into meltdown when CLOC Music Theatre staged the Australian amateur premiere of Wicked (below); publication of the review beat the previous record number of hits to the Man in Chair website in one day by a whopping 50%. CLOC won the Music Theatre Guild of Victoria award for Best Musical for their imaginative production of Jesus Christ Superstar. OSMaD presented a production of all too rarely seen Golden Age classic The Pajama Game.

Visiting London in January brought the chance to see an original show and some new productions of established shows. Lively new musical Bend it Like Beckham had a distinctly British voice but failed to take hold as a hit. Sheridan Smith blazed across the Menier Chocolate Factory stage as Fanny Brice in Funny Girl; a massive success, the production transferred to the West End’s Savoy Theatre ahead of a UK tour. London favourite Guys and Dolls returned in a new production that was so popular it continued in the West End while a second cast undertook the UK tour.

A new venue for Man in Chair, Southwark Playhouse hosted an electric production of Grey Gardens (below). As Little Edie, Jenna Russell inspired the sort of adulation usually reserved for rock stars. In another new venue, the Kings Cross Theatre, In the Heights raised the roof as it extended far beyond its original season.

London’s monster hit for the year was new Tim Minchin musical Groundhog Day, which Man in Chair plans to see in New York next year.

Man in Chair’s annual Broadway trip brought another bumper crop of new musicals. The Tony Awards eligibility closing date of April 30 produces a bottleneck of openings, and given that some close as quickly as they open, March/April is the only time to see all the new productions.

Obsessive Careful ticket buying gave Man in Chair the chance to see megahit Hamilton not once but twice (both just at the regular ticket price). Seeing the original cast was a true thrill, and suffice to say the show is every bit as good, or even better, than it is built up to be. The American history lesson continued with Encores’ concert staging of 1776, which mirrored Hamilton’s diverse casting of America’s founding fathers.

2016 Broadway revivals included a pared back staging of The Color Purple starring the extraordinary Cynthia Erivo. Bartlett Sher’s Fiddler on the Roof was pleasant enough but not on par with his exquisite revivals of South Pacific and The King and I. Roundabout’s charming She Loves Me was beaned to the world thanks to BroadwayHD.

Sublime Broadway star Jessie Mueller elevated new musical Waitress to hit status. Another movie adaption, School of Rock, brought a long awaited hit for Andrew Lloyd Webber. Who knew that all the Lord had to do was abandon overblown romantic drama and embrace comedy.

Despite having hit maker Casey Nicholaw at the helm, Tuck Everlasting was dead on arrival, thanks to a slow, overly wholesome story (hint: kids like danger, just look at Matilda). Somehow the move to Broadway stripped the lustre and thrill from American Psycho, which had been such a hit at London’s Almeida Theatre.

Other flops of the season included Bright Star, which featured a wonderfully melodic score by Edie Brickell and Steve Martin (yes, that Steve Martin). Beloved Broadway pianist/host Seth Rudetsky coaxed a slew of his starry friends to join him in Disaster!, a disco jukebox parody of disaster films that should have really stayed off-Broadway at most. Shuffle Along seemed to have all the elements of a hit, but shuttered rather than risk continuing without star attraction Audra McDonald.

Off-Broadway’s The Robber Bridegroom was 90 minutes of rollicking, inventive fun. Original new Pasek and Paul musical Dear Evan Hansen, a tearjerker if there ever was one, was seen off-Broadway. Its Broadway season, which commenced in December, brought further acclaim for breakout star Ben Platt.

Further ticket tenacity brought Man in Chair the chance to purchase a regular priced seat to The Light in the Piazza 10th Anniversary Concert, which was charging $2500 a head for attendance at the show and dinner as a Lincoln Center fundraiser. Victoria Clark, Kelli O’Hara, Matthew Morrison and castmates were in superb form.

Special mention to MTC stalwart Deirdre Rubinstein, who achieved the impressive feat of appearing in three musicals this year. Rubinstein was as moving in Ladies in Black as she was amusing in Violet, and her Mrs Pearce in My Fair Lady was a plummy delight.

Caroline O’Connor continued her world domination, originating the role of Countess Lily in the pre-Broadway season of Anastasia before returning to Melbourne to star in as Fanny Brice in Funny Girl, followed closely by a dual role in the Sydney premiere of Dream Lover.

Nonetheless, the true music theatre It Girl of 2016 was Lucy Maunder, who graced the stage in no less than four musicals this year. Maunder was a valuable player as troubled young wife Patty in Ladies in Black, went back to high school as alpha bitch Heather Chandler in Heathers (centre, below), looked and sounded gorgeous as songwriter Georgia in Curtains then stole the show with an exquisite rendition of “Unusual Way” as Claudia in Nine in Concert. Having been cast to join the tour of Matilda as Miss Honey, Maunder almost took her 2016 tally to five, before stepping back to concentrate on a “production” of her own, which is due early next year.

Breakout female performers this year included Genevieve Kingsford, whose gorgeous soprano soared in The Light in The Piazza (Clara), Sophie Wright, who was charming in both Avenue Q (Kate Monster, Lucy the Slut) and Kinky Boots (Lauren), and Hannah Fredicksen (Sandra Dee), who was excellent (and unrecognisable) in Heathers (Heather Duke) and more than held her own opposite established stars in Dream Lover. One to watch: Hilary Cole (below, left), a leading lady of the Sydney independent musical stage, was perfectly cast in Heathers (Veronica) and can now be seen in her first big budget musical, Kinky Boots.

Breakout male performers included Blake Bowden, who encapsulated the qualities of a young leading man in Fiddler on the Roof (Perchik) and was subsequently cast as the Elder Price cover in The Book of Mormon, Ainsley Melham, who went from Xanadu (Sonny) straight to the title role in Aladdin, and Jonathan Hickey, who brought down the house with his divine tenor voice in The Light in the Piazza (Fabrizio). One to watch: Stephen Madsen (below, right) is building up an interesting body of work, which this year included the Hayes Theatre return season of Rent (Mark) and the Australian tour of Heathers (J.D.).

A note to readers who have made it this far: please keep in mind that Matilda and The Sound of Music, seen in Melbourne in 2016, were covered in Man in Chair’s 2015 Music Theatre Year in Review.

Independent: The Light in the Piazza

Commercial: We Will Rock You

Independent: Jonathan Hickey (The Light in the Piazza); Jayme-Lee Hanekom (The Color Purple)