Staged on a grand scale and blessed with an army of powerhouse singers, the production is well suited to reaching the far corners of the National Theatre’s sizable auditorium. CLOC matches professional standards in many ways, but their added bonus is always cast size; this Les Misérables is no exception to that luxury, with around 50% more cast members than a professional company could afford.

Marketing for the season promises “a new production,” and while this has generally been achieved, particularly in of terms of sets, the overall tone is highly traditional. CLOC had a stunning success last year with a radically rethought Jesus Christ Superstar, an ingenious production that was gripping, affecting, surprising and thought provoking (not to mention, ultimately, award winning). In his third time at the helm of Les Misérables, Bradtke knows the show intimately. There is no doubt his storytelling is clear and that loyalists will thrill to the chance to enjoy the show again. It must be noted, however, that there seems to be a missed opportunity to illuminate the very well known work through a new lens. 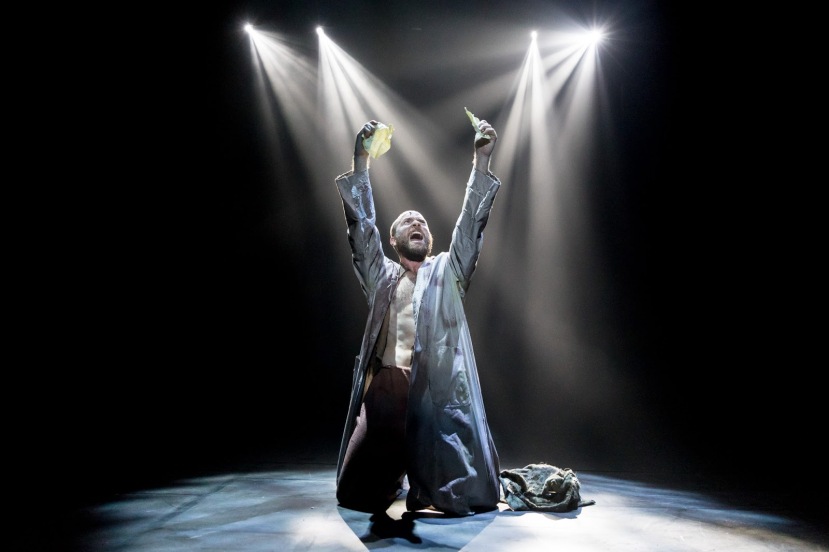 Bringing to mind their acclaimed work on 1999’s The Secret Garden (Whitehorse Musial Theatre) Bradtke and set designer Brenton Staples use an array of tall set units that can be moved and rotated for different settings. Giving the production a unique look, the sets often create a striking image and easily create the large number of locations needed for the story.

The flowing nature of the show was, of course, originally achieved with a revolving stage. In this version, the movement of sets in and between scenes, although smoothly accomplished, can distract from the main action. There is occasionally a surplus of scenery, such as the large sewer backdrop, which is barely referenced by the characters on stage, and the combination of stairs that give Javert a cardio workout before the bridge actually comes in for “Javert’s Suicide.”

The barricade is on an impressive scale, but looks a little too safe. The fact that it rotates is also impressive (even surprising), but comes at a cost of it not filling the width of the stage, making several students look very vulnerable in the gunfight battles.

The lighting design, by Brad Alcock, includes striking moments, particularly in the genuinely thrilling gunfight battles. An overuse of white light, however, often exposes the stage as too crowded and robs some scenes of their mystery. The set for the barricade, in particular is too clearly exposed as a collection of hand painted items. A very successful aspect of the lighting is the superb clarity of the large-scale projected period backdrops, which are in sharp focus on a dozen or more panels at once.

Marcello Lo Ricco’s sound design is crisp and detailed, particularly in the individual amplification of orchestral instruments. Every aspect of Andy McCalman’s excellent work as musical director can be distinctly heard, even if the volume feels just a little high at times. At times, it is difficult to be sure which character is singing, but the well-known story moves along regardless. The transmission of gunshots from speakers around the auditorium elevates the sound to cinematic standard.

Costume designer Victoria Horne extends her remarkable range of skills by working against type on such a gritty show. Amidst the dark hues there are the odd splashes of colours, with highlights including Valjean’s moss green jacket, Bamatobois’ turquoise jacket and a splendid set of military uniforms. A rare misstep is Cosette’s flouncy floral frock, which makes the usually demure character look rather frumpy. It is also not clear why Fantine does not wear the apron and bonnet uniform at the factory. The individually detailed, jewel-coloured ball gowns for Marius and Cosette’s wedding may be the most beautiful ever seen in any production of Les Misérables the world over. 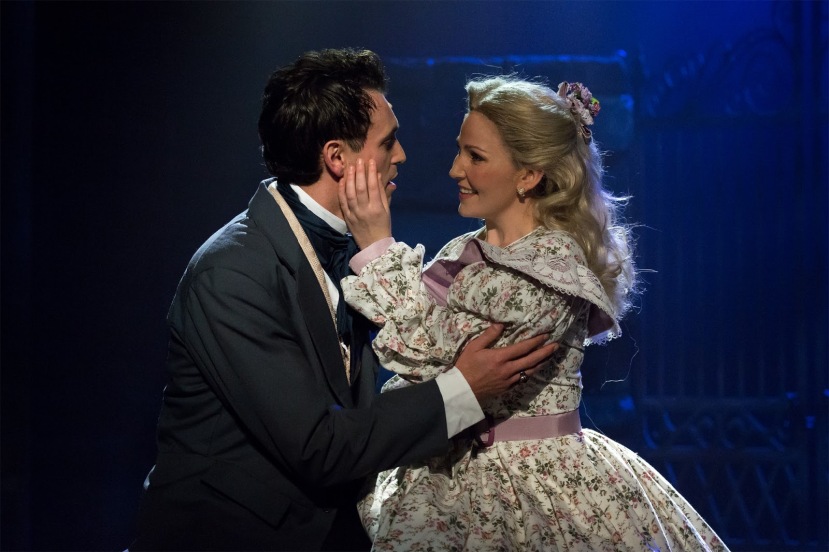 With a physique that clearly indicates Valjean’s extraordinary strength, Mark Doran is perfectly cast as the noble hero Jean Valjean. Doran sings the role, high notes and all, with deceptive ease and with a pleasing variety of tone as befits each scene.

Daniel Mottau gives a thrilling performance, raising the role Marius from the usual pouting poseur to a true leading man. Mottau’s singing is superb, making “Empty Chairs At Empty Tables” a real highlight. A magnetic presence, Mottau cultivates chemistry with all of his scene partners and engages audience interest in whatever drives Marius at each stage of the story.

A host of newcomers shine in their first CLOC show. Matthew Green has the soaring voice for Enjolras. Kirra Young brings out the full tragedy of fragile Fantine. Emily Morris is a pure and angelic Cosette. Eighteen-year-old India Morris is a clear crowd favorite as Éponine, belting out her vocals with unwavering precision and power.

The chorus is blessed with any number of performers who have played leading roles elsewhere, and the choral singing is subsequently of an extraordinarily high standard. Standouts include, but are certainly not limited to Ric Birkett (who is seen in the featured role of Bishop of Digne, Ian Andrew (Bamatobois), Lauren McCormack (vicious Factory Girl) and newcomer Owen Clarke (Feuilly).

Lovers of Les Misérables, of which there are an ever-growing abundance, will surely enjoy the chance to see the beloved show again, especially in a production of such quality. The question of what might have been, with a more adventurous take on the classic, will just have to remain unanswered at this time.