Created with complete respect to the original concept, yet feeling fresh and new, this production is a thrilling 105-minute rollercoaster ride of insidious malevolence, blatant self-righteousness and wickedly mischievous humour. Director Dean Bryant clearly reveres the text, and has added ingenious layers and moments that shine further insight onto the masterful musical.

Casting such a critical light on America and Americans, and deliberately crossing a line in the portrayal of evil, the brilliance of Assassins has received little love in the US. An Australian production can explore the work and have audiences appreciate it for what it is without the interference of national spirit (perfectly valid and understandable though this spirit may be).

Despite the relatively small playing space of the Hayes Theatre, the production can justifiably be called lavish. Bryant, designer Alicia Clements and lighting designer Ross Graham have clearly worked together closely to craft a fully realised staging of Bryant’s concept. The abandoned fun park setting can glitter with gorgeous colours or throw haunting shadows across the stage. The staging is seamlessly fluid, presenting the various scenes and songs as distinct items in a revue.

Dispensing with chorus performers, Bryant has created a true ensemble show. Invited on stage by the redneck Proprietor, the assassins remain in view throughout the show, haunting the fairground as they cling to their bitter memories and failed dreams. Rather than employing dual or triple casting, the assassins themselves play the featured roles and ensembles. The concept of characters from completely different time periods interacting with each other makes perfect sense in light of this concept. 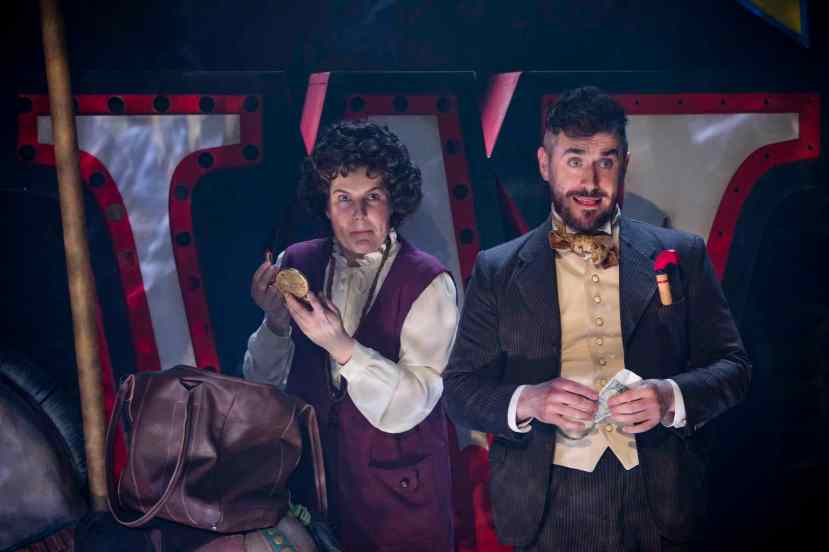 Singing and acting talent throughout the cast is as evenly matched as could possibly be desired.

John Wilkes Booth, the original presidential assassin, is given the grandest entrance and, being an actor, goes on to play all the other Presidents. David Campbell is in blisteringly good form, demonstrating his keen intelligence as an actor.

Martin Crewes channels his energy and focus into portraying Giuseppe Zangara’s awful stomach pain, conveying the way the unrelenting agony infiltrates every aspect of the poor man’s life. As with each of the assassins, the idea that killing a president will cease their woes is presented as a perfectly valid and viable option to Zangara, and he seizes upon the sweet relief it will supposedly bring.

Resplendent in a Jan van de Stool wig and purple pant suit, Kate Cole is delectably hilarious as clunky cuckoo Sara Jane Moore. The sight gag involving the fate of Moore’s poor dog is one of the best uses of a fast lighting cue I have ever seen.

Hannah Fredericksen is a winsome rag doll as gullible waif Lynette “Squeaky” Fromme. The look on Fromme’s face as Moore deals with her obnoxious kid is priceless.

Connor Crawford immerses himself in the role of Jodie Foster fanatic John Hinkley Jnr. Crawford pulls off a brilliant moment when he begins the lovely ballad “Unworthy of Your Love” with his character’s feeble singing voice and poor guitar skills before neatly switching to the beautiful way the song sounds in Hinkley’s head.

Casting a young actor and dressing the character with a contemporary look, Bryant has The Balladeer represent the continuation of these stories via the youth of today. 2016 VCA graduate Maxwell Simon gives a breakout performance in the role; his composure, his look and his singing voice, not to mention his ability to readily cry on cue, augur very well indeed for future roles. Preparing for the scene with history’s ultimate assassin, the other characters aggressively set upon the Balladeer, stripping him of his clothes so he can transition to Lee Harvey Oswald.

Jason Kos brings a raw masculinity to Leon Czolgosz, capturing the character’s ongoing incomprehension in the ways of the industrialised world. 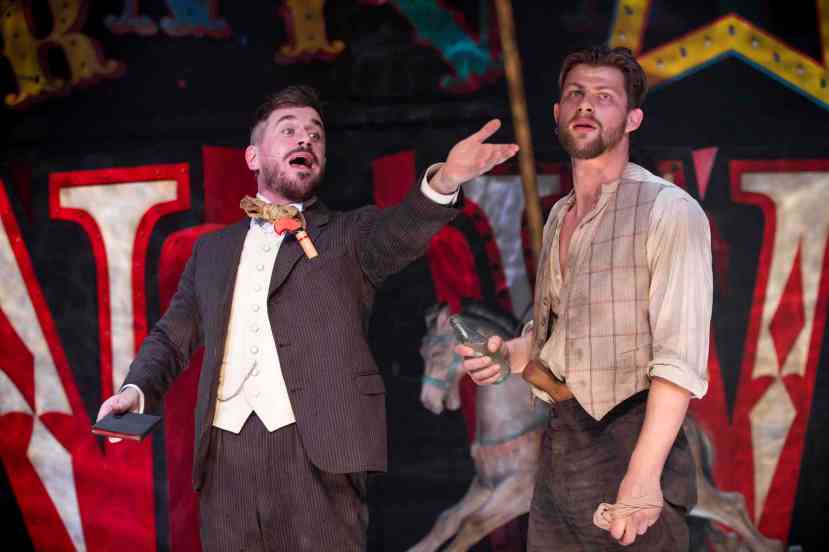 Not playing an assassin, Laura Bunting enters as self-declared anarchist Emma Goldman for her scene with Czolgosz. In an inspired moment during “The Ballad of Czolgosz,” he draws strength in his goal to shoot the president when he sees a vision of Goldman.

Bryant wisely pulls back from using the Assassins in the moving 11 o’clock number “Something Just Broke,” having them silhouetted upstage with the spotlight on a lovely performance from Bunting. She is then left there downstage, crying for America’s loss of innocence as the assassins grin at the havoc they have wrought.

As each of the assassins have their scene in the spotlight, the Proprietor (Rob McDougall) sits gleefully side of stage leafing through vintage posters of the relevant Presidents like a kid at a footy match going through his footy cards as he watches his idols in action. While lyrics such as “Every now and then the country goes a little wrong” are incredibly prescient, the final image displayed by the Proprietor still draws gasps.

Not for the faint of heart, this production of Assassins is a compelling spectacle for lovers of Sondheim and of serious musical theatre.