Mounting a musical adaptation of the classic 1973 film The Sting proves to be an inspired idea, and incorporation of the modern trend of diverse casting pays substantial dividends. The writing team have proven credits on Broadway: book writer Bob Martin co-wrote The Drowsy Chaperone, while composers Mark Hollmann and Greg Kotis penned the score of Urinetown. The result is what is always desired in a screen to stage adaptation- a new product which respects the original material but also significantly enhances it.

Even lovers of the original movie may find the details a little blurry after this many years. Fortunately, storytelling here is crisp and clear, starting with a terrific opening number, in which exposition is punctuated by fierce ensemble tap beats.

Choreography is is incorporated in scene transitions, with designer Beowulf Boritt’s simple but handsome scenic elements danced into place by the cast. Paul Tazewell’s costume designs use smoky tones on slinky gowns and sharp pin striped suits, finished off with spats for the men and curled bobs or marcel waves on the women.

The change of one of the lead pair of con men to African American is incorporated into the plot. Successful younger grifter Johnny Hooker seeks revenge on vicious Irish mob figure Doyle Lonnegan for the murder of his beloved mentor Luther. Hooker convinces Lonnegan to place a crooked bet for him on the basis that the gambling establishment will not accept such a bet from a man of colour. Charismatic young triple threat J. Harrison Ghee is sensational as Hooker, beaming with leading man magnetism.

Hooker moves to Chicago to work with infamous huckster, and part time pianist, Henry Gondorff. Harry Connick Jr displays a mischievous sparkle behind the weary hooded lids of Gondorff, using his musical skills on stage as well as making a contribution to the score’s music and lyrics. 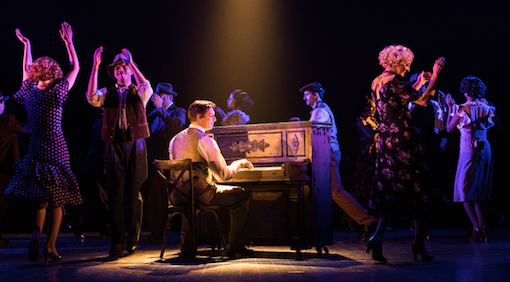 With the first phase of the long con in place, the company performs a cleverly conceived rhythmic rap to the calling of a horse race. This device returns at the show’s climax, by which point canny writing has increased the tension with a number of interwoven threads.

Scott Joplin’s iconic piano rags are deftly, and sparingly, threaded through the score, mainly used for scene transitions and the occasional dance break. The fact that the new score holds up next to tunes as well known as “The Entertainer” is testament to the quality of the writing.

The combination of adult-oriented storytelling and spectacular choreography are bound to lead to ongoing success for The Sting.

The Sting was reviewed 1.30pm Thursday 12 April 2018 at Papermill Playhouse, New Jersey, where it plays until 29 April 2018. Details of the upcoming Broadway season are yet to be announced.