Rodgers and Hammerstein’s groundbreaking 1945 musical still resonates today thanks to its timeless theme of redemption and its rapturously beautiful score. More than 70 years on, society continues to struggle with the issue of domestic violence, a challenge to which Carousel offers no simple solutions.

At a time when the Broadway musical was in its infancy, Rodgers and Hammerstein’s level of innovation remains an extraordinary achievement. The show begins not with a rousing chorus number but with an extended pantomime scene. The subsequent 12-minute bench scene (which includes immortal classic “If I Loved You”) is a miraculous, concise integration of drama and music. An extended ballet replaces the script for key scenes in act two. Treasured hymn “You’ll Never Walk Alone” has never been matched for the poignancy of its uplifting message of hope.

While it seems that no revival of Carousel can top the 1992 version directed by Nicolas Hytner at London’s National Theatre (which transferred to the West End and Broadway), the merits of this new production include a sterling cast, generously sized orchestra of 25 musicians and thrilling choreography.

In the biography Somewhere For Me (by Meryle Secrest), Richard Rodgers is quoted as saying that, due to the war, the main requirement for a dancing boy in Carousel was that he be alive. In this current era of professional arts training, choreographer Justin Peck has access to triple threat talent that original choreographer Agnes de Mille could only have dreamt about. Peck invigorates the production with high energy dance, which is notably imbued with a very strong sense of character and purpose.

Opening prelude “The Carousel Waltz” dispenses with actual carousel horses (save for one that Billy places Julie upon), a move which allows for a more flexible approach to the chorus characters’ interaction. Half a dozen of the show’s principal characters are established in the prelude, and the three leads receive a star’s entrance to audience applause.

The lively dance section of “June is Bustin’ Out All Over” is re-orchestrated to great effect. The women express conjugal longing through dance in “Mister Snow (reprise)” before the men bring down the house with a sensational hornpipe after “Blow High, Blow Low.” Even though audiences are now accustomed to triple threats, it is incredible to hear the quality of singing from artists who have just performed ballet-level dance. 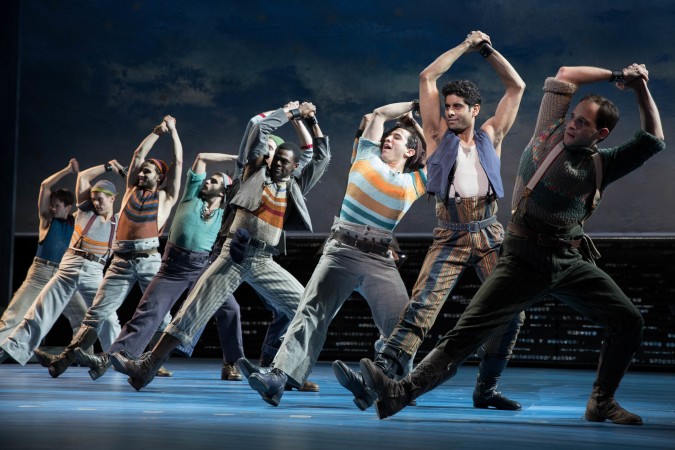 Amar Ramasar, a principal dancer at New York City Ballet since 2009, gives an electric performance as Jigger, the cowardly, bad influence on central anti-hero Billy. Likewise, Brittany Pollack, a soloist with New York City Ballet, impresses mightily with her work as Billy’s troubled teenage daughter Louise, a character that Pollack successfully establishes and, crucially, endears to the audience in an all too brief period late in the show.

Director Jack O’Brien establishes a respectful tone towards the material, eschewing any potential for camp melodrama with sincere, committed performances and straightforward clarity of storytelling. While the staging does not shy away from Billy’s struggles with his tendency towards violence, O’Brien simplifies Julie’s response to a state of acceptance, removing the exchange between Julie and Louise about a slap feeling like a kiss.

Another interesting decision is the ominous, and rather heavy handed, placement of The Starkeeper (John Douglas Thompson) into scenes where Billy makes ill-advised decisions.

The production opens with a brief glimpse of the starry heavens before focusing on an New England town of the late 19th century. Santo Loquasto’s scenic design is attractive but rather simple by Broadway standards. One of the more successful settings is the misty wharf and docked ship where the robbery unfolds; a high pier gives O’Brien the location to stage a dramatic death fall.

It is very disappointing to note that O’Brien has cut a pair of songs in act two. After “This Was A Real Nice Clambake,” O’Brien hits the fast forward button and takes us straight to Julie’s “What’s The Use Of Wond’rin’,” skipping Enoch’s “Geraniums In The Winder” as well as Jigger and the chorus’ “There’s Nothing So Bad For A Woman.” Perhaps the audience members who might have lost attention during those numbers could have stayed home and watched reality television instead.

While the early 1990s revivals incorporated colour blind casting in the secondary couple of Carrie and Enoch Snow, this new revival sees a more extensive integration of varied nationality backgrounds, with the key casting decision being African American actor Joshua Henry as Billy Bigelow. It is a credit to O’Brien that this casting retains an entirely colour blind feel. Henry performs as the premier Broadway leading man that he is, and brings great dignity to the stage. Henry’s powerful, expressive rendition of “Soliloquy” is absolutely thrilling, leaving the audience on a real high as the act one curtain falls.

Broadway favourite Jessie Mueller makes the natural progression from playing Carrie in the 2013 New York Philharmonic filmed concert of Carousel to starring as Julie Jordan here. An expert in conveying tender vulnerability, Mueller reveals an exquisite, bell-like soprano on Julie’s high notes. Mueller shows integrity to the character by giving her an independent, introverted persona rather than a more showy leading lady style.

Lindsay Mendez is highly amusing as Julie’s dear friend Carrie, nailing the comic timing and singing with infectious warmth and gusto. As successful fisherman Enoch Snow, Alexander Gemignani is in superb voice, making the loss of “Geraniums In The Winder” all the more disappointing.

World famous operatic soprano Renée Fleming extends her repertoire in the supporting role of Julie’s generous cousin Nettie. Portraying Nettie as somewhat more golden and slender than usual, Fleming nonetheless proves a valuable asset an a natural to the musical theatre stage, developing cheerful camaraderie with the ensemble, managing her involvement in choreographed moments with ease and, of course, singing the role with pristine beauty.

This new revival of Carousel is as close a connection as we have to the dawn of the golden age of Broadway. Any eyes not clouded by tears in the finale belong those with hearts of stone.