Brilliantly conceived and expertly realised, The Australian Ballet’s world class new production of Spartacus is an artistic and physical triumph. 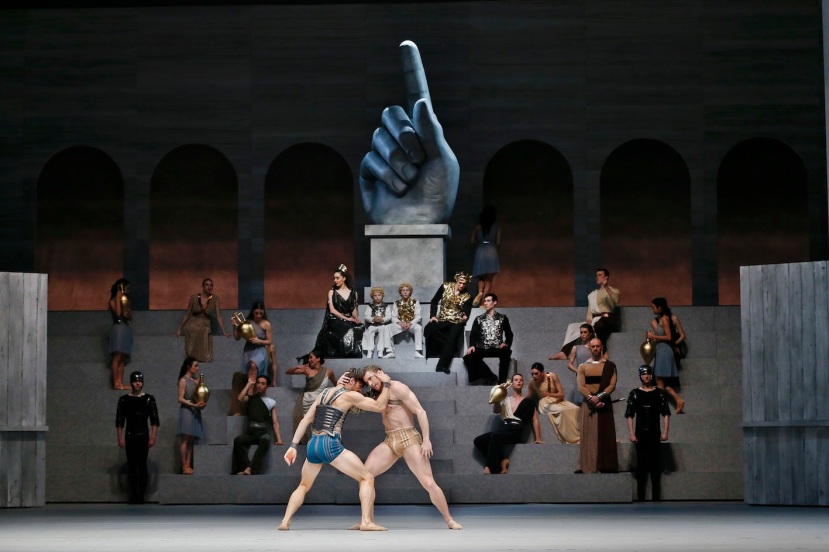 The passage of almost twenty years since the frequently-seen 1978 production of Spartacus retired from the repertoire has only increased the mystique and allure of this highly masculine, decidedly non-fairytale ballet. New audiences weaned on Game of Thrones are set to thrill to the Roman gladiatorial setting, with the impact of the violent drama further enhanced by the passionate love story at its heart. 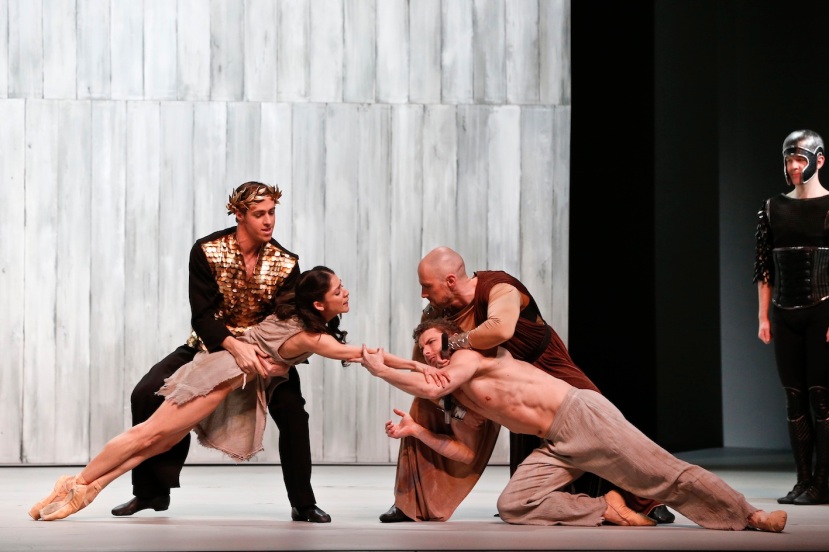 A high level of collaboration has clearly been required to allow the masterful creativity behind the new work to bear such fruit. The core of the ballet’s towering quality is, or course, the work of choreographer Lucas Jervies, with music and all aspects of design combining cohesively for a seamlessly integrated production.

Jervies’ choreography has a unique spirit, with a sense of urgency and spontaneity coursing through the action. Storytelling is expertly concise and immediately involving. Act one, in particular, is a masterwork of succinct and affecting ballet. After the precision of Roman consul Crassus’ flag-wavers comes the grounded bravery of the captured slaves; trained then forced into mortal combat, the male slaves-come-gladiators soon band together in rebellion.

Jervies imbues the love between Spartacus and wife Flavia with a sensuous passion that makes the usual ballet royals look decidedly chaste in comparison. A hallmark of the choreography is the strong sense of character and purpose. With support from dramaturge Imara Savage, societal hierarchy is clearly delineated, and dramatic stakes are kept urgently high. 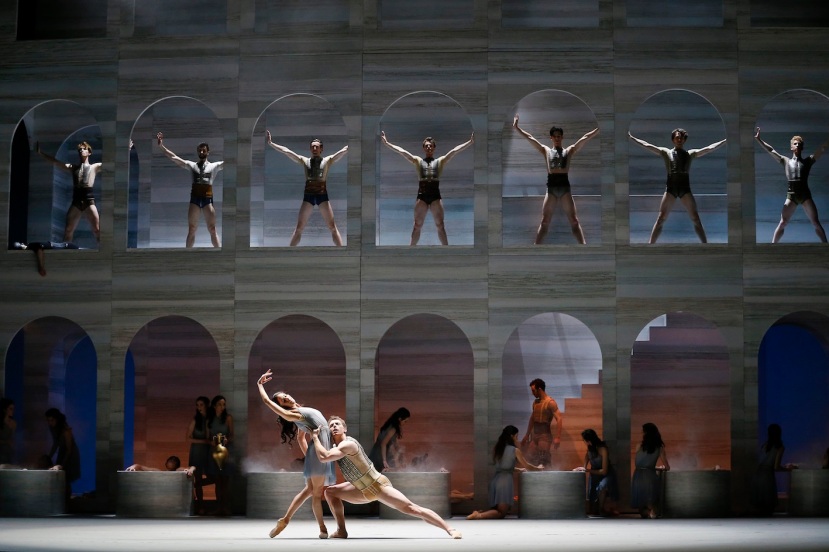 Contributing both costume and set design, Jérôme Kaplan crafts a bold and striking non-naturalistic visage of sheer, curved towering walls and rows of distinctly Roman arches. In act two, weary noblemen luxuriate in steaming Roman baths, drinking wine from golden amphoras proffered by uniformly beautiful maidens. A giant statue of Crassus’ raised forefinger (symbol for death in the arena) is overturned by the men for a thrilling visual climax to act one.

Denoting the oppressed in pale earthy tones, Kaplan dresses the patricians in swathes of luxuriant modern colours. There is, of course, not a tutu nor a tight bun in sight; in their place are long filmy skirts and flowing wigs, which playfully sway with the music. For the women, exotic headwear is at a premium; for the male slaves, striped, tightly fitted shorts are as practical as they are authentic. 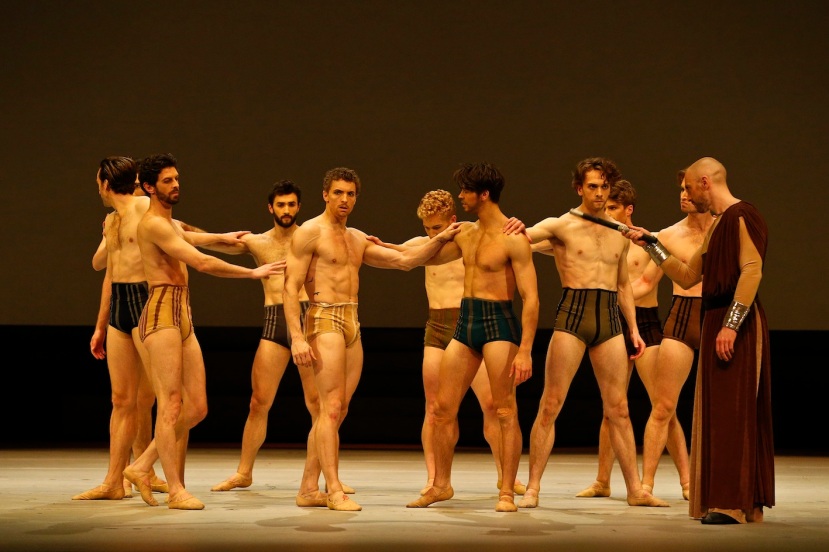 Kaplan’s work is inextricably linked with the lighting design of Benjamin Cisterne, both designers supporting Jervies’ vision for a flowing work of alternately grand and intimate scenes. A beautiful example of the intertwined work comes in act one when the enslaved Spartacus dreams of Flavia: the set and lighting subtly alter to indicate the dream, and the choreographic climax, set to the sweeping love theme, is paired with a warm burst of light. 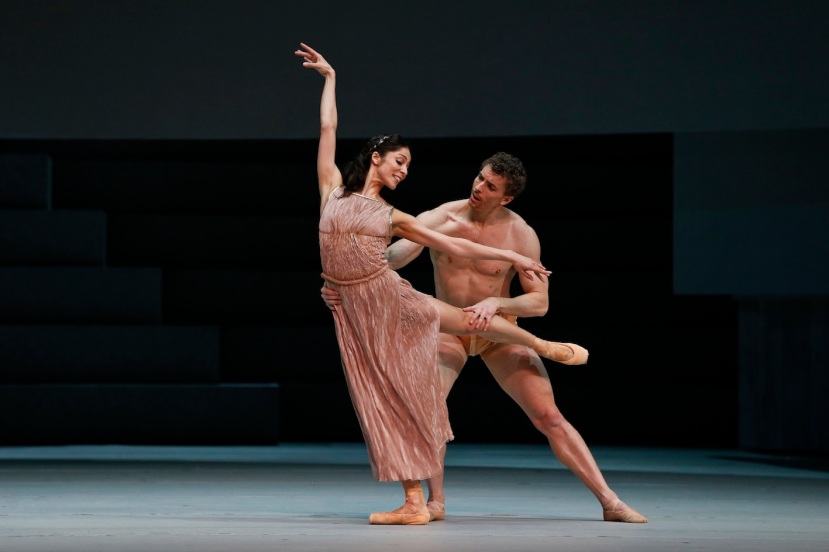 The highpoint of the collaboration comes in the finale. Eschewing the religious iconography of the crucifix, the vividly bloodied men are lifted on to white blocks, awaiting their death in a striking formation that creates a rather unforgettable final image.

The impact of Jervies’ dramatic work is significantly enhanced by the precise and thrilling contributions of fight director Nigel Poulton. Working without weapons for the most part, the fighting is highly physical and incredibly realistic, with percussive thwacks ringing out with all punches. The gladiatorial battles are extraordinary, achieving a level of sophistication that would take days, not to mention copious stuntmen, to achieve. 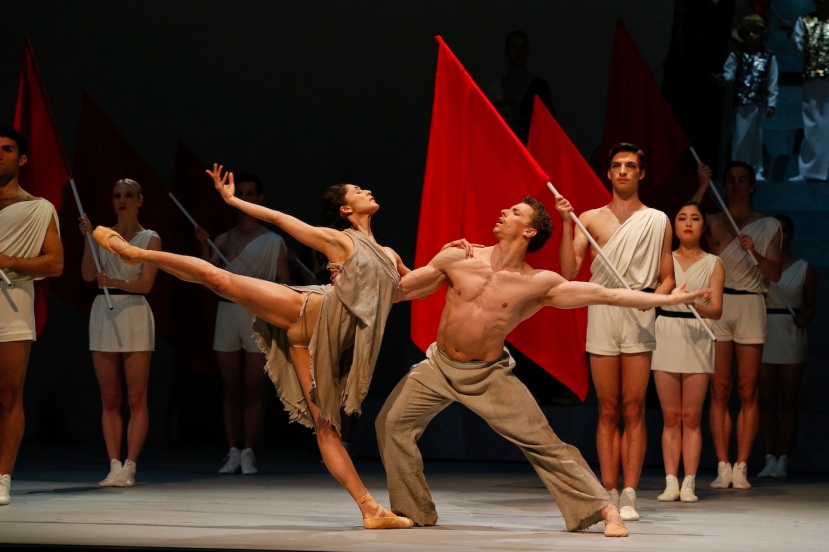 Befitting the epic scale of production, the orchestra pit is in its larger configuration, with the first two rows of the State Theatre removed. Nicolette Fraillon conducts Orchestra Victoria in an enthralling performance of Khachaturian’s score. Ringing brass is a feature, with all manner of percussion adding crisp, tinkling colour. Fraillon matches the tense stage action with brisk, yet meticulously controlled, tempi, also complementing the festive moments with infectious oom-pah rhythms.

Kevin Jackson’s mighty incarnation of Spartacus is a towering achievement indeed. Bulked up well beyond the regular svelte balletic profile, Jackson carries the additional musical with grace. In an early solo. Jackson captures Spartacus’ frustration and rage. Reliably underpinning the physicality of the role with tender sensitivity, Spartacus’ despair at killing his friend Hermes in the arena is palpable, his love for wife Flavia is all consuming and his mistaken act of mercy towards Emperor Crassus is entirely convincing. In a career of highlights, not the least of which to date was Nijinsky, this is an unforgettable and unmissable performance from Jackson. 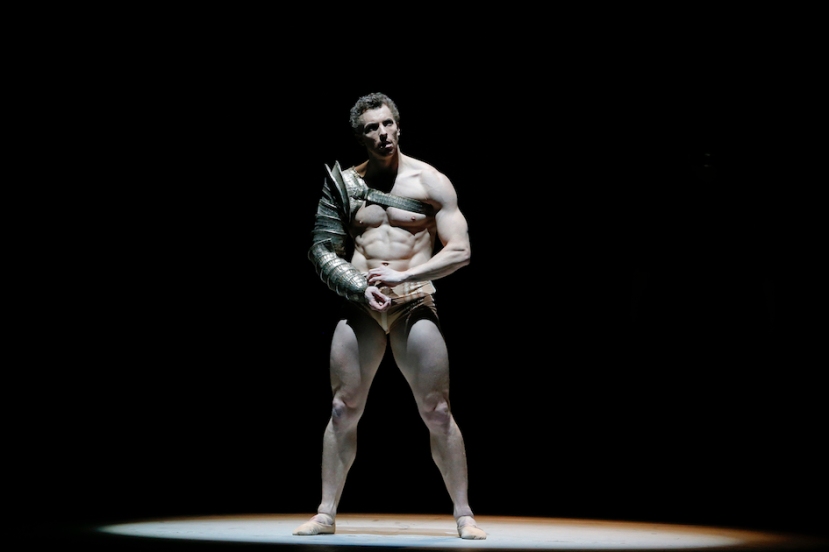 Robyn Hendricks brings a sense of stripped-back glamour to Flavia, portraying a once powerful woman who has unfairly fallen from grace. From her hesitant dancing with the other slave girls to her vengeful waterboarding of Crassus after the uprising, Hendricks keeps Flavia grounded in reality. In the absence of the usual suite of balletic flourishes, Hendricks creates a strong yet vulnerable heroine to highly memorable effect.

Contrasting his loving family side with his entitled brutality, Ty King-Wall takes Crassus beyond the status of a one-dimensional villain. King-Wall dances with deft grace, showing Crassus as a virile man, comfortable in the public eye.

As slinky concubine Tertulla, partner to Crassus, Amy Harris* contributes characterful presence, with her character’s dance potency being unleashed in act two. Harris is particularly successful with Jervies’ spontaneous style, dancing a compelling solo before being joined by King-Wall as the regal pair parades their lust for all to see. 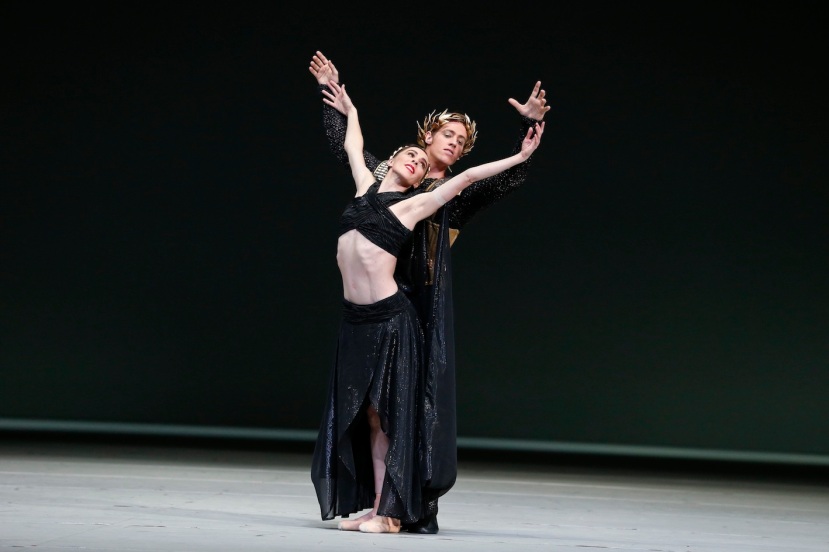 In another magnetic performance, Brett Chynoweth shines in the role of Caius, a hedonistic member of Crassus’ court. While much of his work is in leading the noble men, Chynoweth is fittingly partnered in duets by Natasha Kusen as Eustacia.

Despite his character meeting a relatively early death, Jake Mangakahia makes a very strong impression as Hermes, pairing with Jackson for a battle as tense as it is convincing.

Marcus Morelli successfully captures the bulldog tenacity of Crixus, the slave who will not give up on fighting for freedom.

Spartacus may not be the ballet for grandparents to take young children, but as adult entertainment it is hard to beat. Attendance is very highly recommended for lovers of all facets of the arts.

*Hearty congratulation to Amy Harris, whose very well deserved ascendance to Principal Artist was announced after the curtain calls on opening night.