It probably sounds a little odd to describe a play that tackles the issue of euthanasia as entertaining, but in Melbourne Theatre Company’s world premiere of The Architect, playwright Aidan Fennessy replaces mawkish sentimentality with charming humour, substitutes political agitation with affecting realism, and sidesteps stereotypes with believable, intriguing characters. 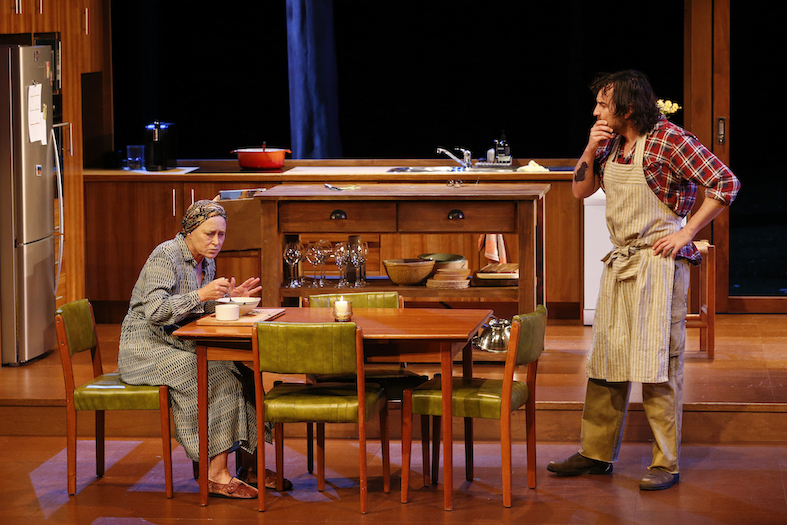 Fennessy greatly increases the strength of the message of The Architect by not actually sending a message. Instead, the audience is privy to an intimate, personal story of a worldly woman’s wish to be the architect of her final days. Director Peter Houghton and the exemplary cast deftly balance the delightful amusement and inevitable poignancy to highly memorable effect.

Before hearing specifics of the prognosis, Helen’s headscarf and frailty indicate that she is gravely ill. Somewhat estranged from her Sydneyside son and fussed over by fastidiously devoted partner John, Helen inexplicably latches onto roughly hewn young man Lenny to be her live-in carer during John’s imminent overseas trip. 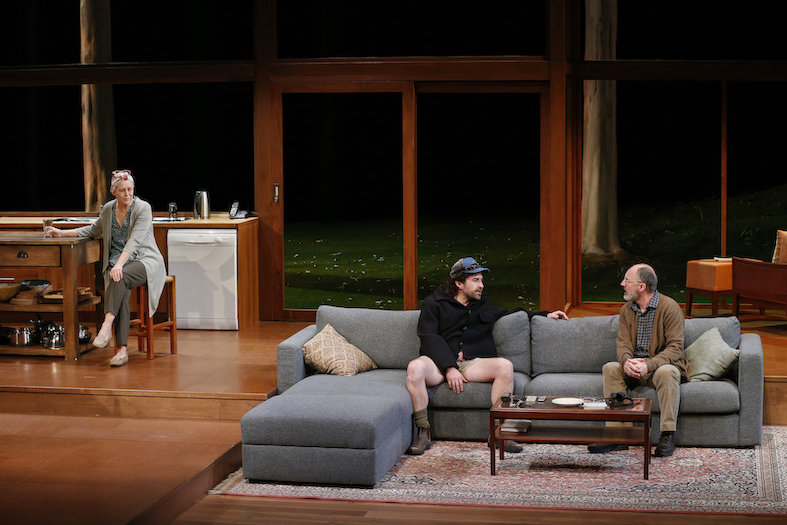 The handsome production is designed by Christina Smith, who grounds the play’s realism in a highly naturalistic setting. Helen and John share a comfortable Balwyn East home, with a spacious open plan living area that looks out onto a garden of noble gum trees. Smith cannily displays the couple’s history by decorating with furniture and appliances across a wide era. The highlight of Smith’s work is saved for late in the piece when the proscenium arch rises to double the height of the home, leaving the characters’ final drama in a cathedral-like setting.

Working in a space backed just by windows, lighting designer Matt Scott seizes the scope to present all manner of ambient light, often drawing attention to significant moments by gently dimming the light. Scott cleverly shows the passage of time in scene changes by sweeping the shadows of the gum trees across the room.

Sound designer J David Franzke colours the setting with the buzz and chirp of a leafy suburb, also providing the necessary crackle and pop for the key sound effect of the cherished turntable. Franzke’s compositions give the audience breathing space during the brisk scene changes, which often also involve a change of time and of tone. 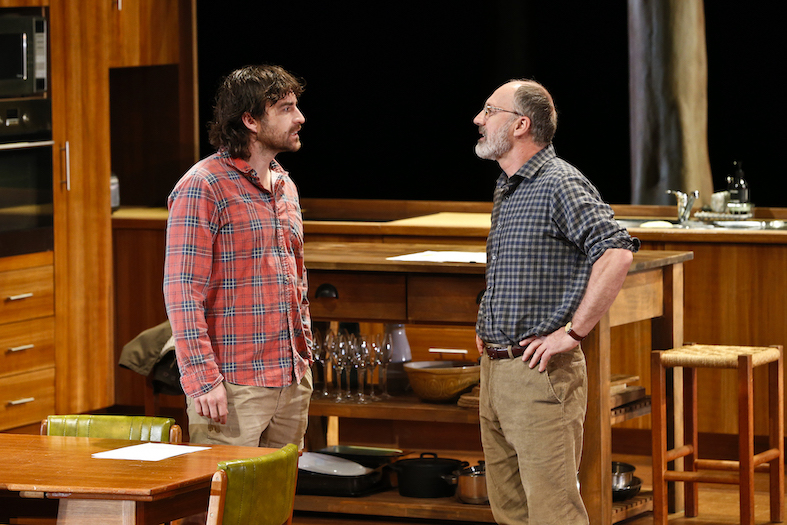 The heart of the play is quickly established in the opening moments, through the successful collaboration of Fennessy, Houghton, Smith and lead actors Linda Cropper (Helen) and Nicholas Bell (John). A single word speaks volumes of John and Helen’s close connection: after a brief conversation, Helen returns to her reading chair and scrambles to find something. As she opens her mouth to speak, John simply booms “Head!” and Helen gratefully, and a little sheepishly, puts her hand on her glasses. The line is not a comic one per se but earns a hearty laugh of recognition from the audience.

Cropper’s performance as Helen is one for the ages. Speaking with the polished tone of a Literature teacher who has dabbled in the dark arts of amateur theatricals, Cropper’s Helen is, by turns, forthright, compassionate, intelligent, vulnerable, irascible and totally endearing. Her head shaved for the role, Cropper appears with little or no makeup and wears loose robes, all the while emanating a radiant inner beauty.

Fennessy blesses Bell with a character of interesting facets. John is a successful lawyer, and this could have been the beginning and end of his character description, yet layers are revealed in his borderline obsessive-compulsive tendencies and in his participation in Renaissance costume play. Bell shows John’s love for Helen in his every word and deed, and the pair share highly convincing chemistry with a past that is evident in the present.

Serving as an illuminatory disruptive intrusion into Helen and John’s neatly ordered, but medically fraught, life, Lenny is Helen’s surprise choice for her live-in carer during John’s impending trip to the mock battlefields of England. A transient, twenty-something, tattooed tradesman, Lenny comes recommended by Helen’s insufferable, unseen sister Barbara. Lenny has a blunt sincerity that serves to mask the pain of his earlier life, but his heart of gold reveals itself in myriad acts of tenderness and compassion.

Looking every bit the long haired lout in flannel shirts and paint-smeared pants, Johnny Carr creates instant impact when Lenny arrives to be interviewed for the live-in position. Helen’s interest and attention prompt Lenny to gradually share his talents and reveal his demons. Helen is won over as she gazes admiringly at Lenny’s habit of tidying everything away, knowing it will make him an ideal fit in the household.

The pair become closer when Lenny cooks for Helen, allows her a sip of wine and insists she rise for a dance, for which he picks a song that triggers exactly the sort of precious memories that Helen is sorting through in her final days. 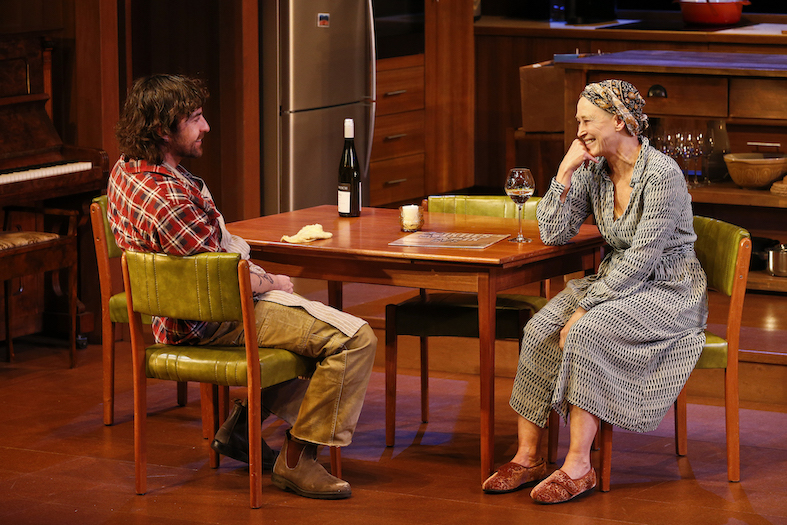 Carr is excellent in his portrayal of the obtuse millennial, underplaying the physical and vocal aspects of the role while allowing glimpses of fleeting emotions with razor-like precision. The combination of Carr’s nuanced performance and Fennessy’s intelligent writing create a character who is as endearing as Helen, in his own way.

With act two well underway, the focus of the play as basically a two-hander seems evident until Fennessy shakes the audience out of complacency with a surprising switch of gears. Fresh conflict ensues with the arrival of Helen’s son Jeremy, played with stern vigour by Stephen Phillips. 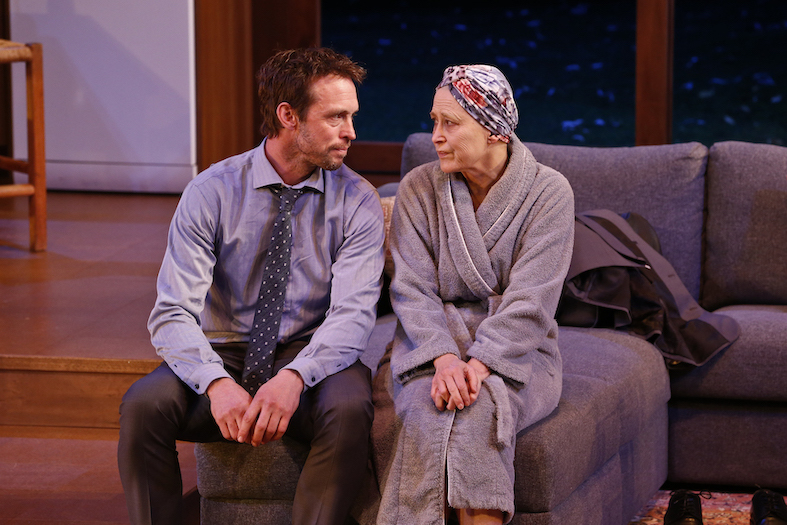 When a resulting medical emergency seems to indicate the end of the story, Fennessy still has a final, heart-wrenching act to play. Once the tears have been wiped aside, the ending will doubtlessly lead to much post-performance discussion.

The Architect is very highly recommended.

The Architect plays at The Sumner, Southbank Theatre, Melbourne until 31 October 2018.

The The Architect program can be read online.