Offering the chance to see a fringe show in a mainstream venue, Colossus is presented by Arts Centre Melbourne as their generous Take Over! 2018 contribution to Melbourne Fringe Festival.

Given the general admission seating, the audience arrives in good time to secure their seats, and is then held in the foyer until the doors open at the advertised starting time, by which point anticipation develops a sense of Bourke Street on the morning of the Myer stocktake sale.

Entering the studio, the company of some 50 dancers is seen lying on stage in an impressively perfect circle. With feet pointing in and arms stretched over their heads, the dancers present themselves in an open, vulnerable position. The white, circular stage lies in front of a white sheer curved panel. There as many outfits as there are dancers, but uniformity is achieved with all black clothing, fitted on top and flowingly loose in pants.

In the opening sequence, the dancers create crisp waves around the circle to the abstract, pulsing soundscape of composer Robin Fox. The dancers move as if making up a single living organism filmed in slow motion close up in a nature documentary.

The precision and unity Lake has achieved are evidenced by the fact that the dancers, while lying in the circle, largely cannot see each other so each canon move is passed around by touch and sound. There is a sense of Busby Berkeley style to this opening sequence, and seating is recommended at least four rows back so as to appreciate the effect as fully as possible.

Arising from the circle, the dancers spend some moments in the dark, emitting a disconcerting hissing sound. When the lights come up, the dancers are neatly arranged in rows as if for a school photograph. A disembodied voice instructs the movements, which the dancers follow as if under a hypnotic spell. Lighting designer Bosco Shaw uses footlights to magnify these movements into fascinating overlapping shadows on the rear wall.

As Colossus proceeds, each sequence flows unimpeded into the next, with no break for applause. A notable aspect of Lake’s work is the way that featured dancers seem to randomly emerge from the crowd as if by chance. There is a strong sense of interaction in the work, with dancers often coming closely face-to-face. Several of the sequences involve dancers “conducting” the other dancers, giving a sense of spontaneity to the very well rehearsed work.

In scenes of seemingly chaotic rapid movement, dancers move with focused purpose, keeping to the brisk tempo of their path while avoiding collisions. Lake makes percussive use of breath, thigh slaps and pounding or tapping on the floor. In an intense central sequence, dancers move in distinct groups without music, their footsteps and breaths providing the crisp rhythm. 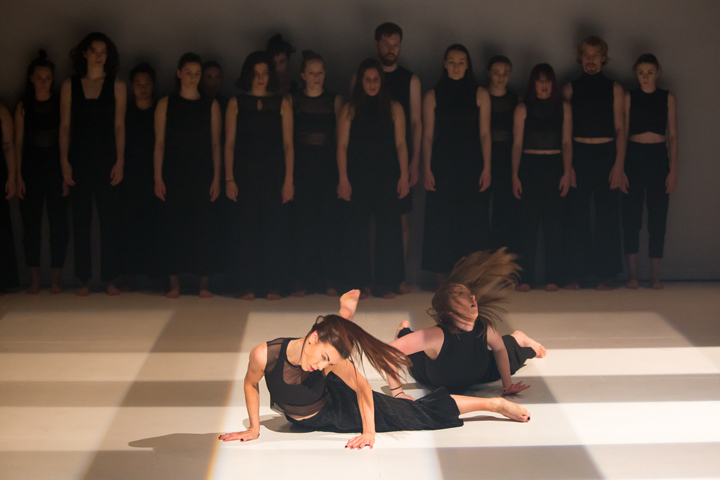 A breathless 50-minute work,Colossus is a testament to the power of collaboration, with basically all of the choreography looking incredible due to the scale of the large group; the same choreography from much smaller numbers would lose almost all impact.

Lovers of modern dance are sure to be thrilled by Colossus. Very reasonable ticket prices make attendance as accessible as it is enticing.