One of Broadway’s most rapturously beautiful scores, Nine the Musical is given a smartly conceived, darkly burnished boutique production by prolific Melbourne company StageArt.

While the midlife breakdown of a once-successful Italian film director may be an unlikely topic for musicalisation, book writer Arthur Kopit found rich psychological territory in adapting Federico Fellini’s semi-autobiographical film 8 ½. In an ingenious concept that actually seems utterly obvious and yet has rarely, if ever, been used before or since, Nine the Musical surrounds one man with an entire cast of women. 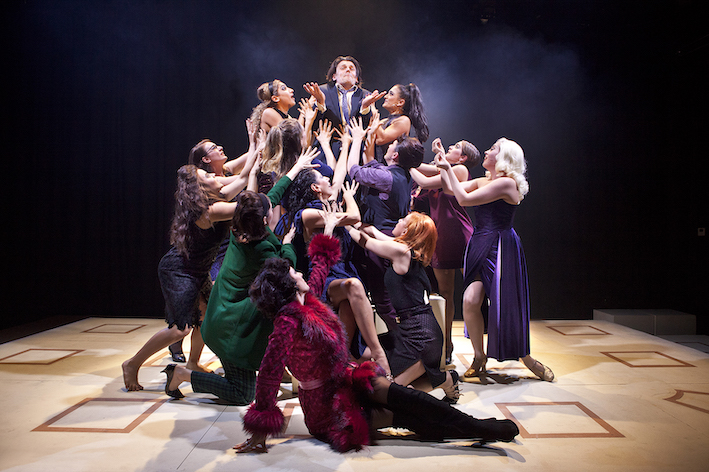 Writing for a female cast inspired Maury Yeston to compose a gorgeous collection of melodies, beginning with the lovely idea of singing the “Overture Delle Donne.”

Bereft on an idea for his next movie, director Guido Contini juggles rising pressure from his wife, his mistress, his lead actress and his producer. Increasingly losing touch with reality, Guido mentally retreats to the comfort of his life a nine-year old boy, free of responsibility and safe in his mother’s arms.

Melbourne musical theatre fans of a certain age share treasured memories of the 1987 season of Nine, which starred John Diedrich, Maria Mercedes, Peta Toppano, Nancye Hayes and even a young Tina Arena. Two years ago, Melbourne was treated to Nine in Concert, which provided a welcome chance to wash away memories of the disappointing Hollywood film of Nine. 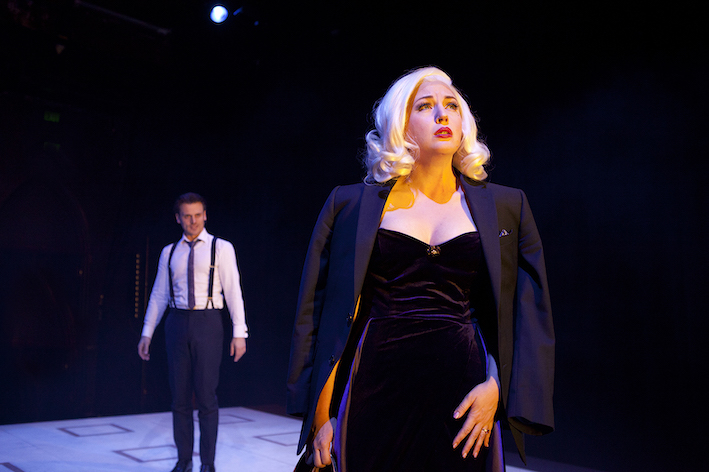 Increasingly well established as a prodigious choreographer, Michael Ralph steps up from choreographer of the 2016 concert to director and choreographer of this season of Nine. In a highly auspicious directorial debut, Ralph shows that there is quite possibly nothing that he cannot do.

In a pared back staging, Ralph runs with the abstract nature of the book, conjuring a dream like state in which memories and reality overlap and intertwine. It is a credit to Ralph’s careful work, as well as to the committed performances of the cast, that storytelling is so clear and that even simultaneous scenes of Guido’s real and imagined life can be followed with ease. Ralph amps up the pressure on Guido by having the women stand side of stage when not in the spotlight, signifying their ongoing presence in his mind.

While Ralph does not have the scope for full-blown dance in Nine, his company numbers are nonetheless stunning, benefitting in particular from Ralph’s innate knack for slowly building a number up to a spectacular climax. Key highlights include “Folies Bergeres,” in which producer Liliane La Fleur attempts to inspire Guido to direct a musical, “Ti Voglio Bene/Be Italian,” in which Guido recollects the time in his youth when sex, love and punishment were irrevocably interwoven, and the “Grand Canal” sequence, in which Guido directs a pastiche version of the musical’s plot as a misguided attempt to cannibalise his own life for the sake of a movie.

Musical director Nathan Firmin leads a tight band of eight musicians in an enjoyable performance of the infectiously melodic score. Given that the female cast is reduced from 21 to 14, the use of full harmonies is impressive indeed, reflecting the talents of the cast.

Serving as both set and lighting designer, Tom Willis provides a raised white stage, neatly framed by a ribbon of LED lighting. Having just the black curtain as backdrop is rather plain, but this can be overlooked once the space is filled with life.

Costume designer Meredith Cooney dresses the women in glamorous eveningwear, each in a decadently dark signature shade. Minor costume changes and the occasional use of props are both achieved with surreptitious sleight of hand, adding sprinklings of theatrical magic.

As well as looking the part, experienced actor Anthony Scundi is also a good fit for Guido in terms of the magnetic presence of the man. Vocally, however, Scundi is out of his depth, producing the required notes but not achieving the legato sound nor rich baritone tone needed for the massive amount of singing the role entails. Strong acting and solid chemistry with his co-stars goes a long way towards compensating for this aspect.

A handsome, bookish beauty in glasses and navy brocade fitted gown, Alana Tranter cuts the figure of a goddess as Guido’s long suffering but ever loyal wife Luisa. Watching in horror as her life is put on display for the cameras, Tranter gives a masterclass in stillness, bottling all her rage until the final insult of Luisa’s glasses being taken off her to be put on the actress playing her in the film. Tranter explodes in 11 o’clock number “Be On Your Own,” unleashing Luisa’s pent up fury from the first powerful note. In short, Tranter is a musical theatre actress whom we should on stage see much more often. 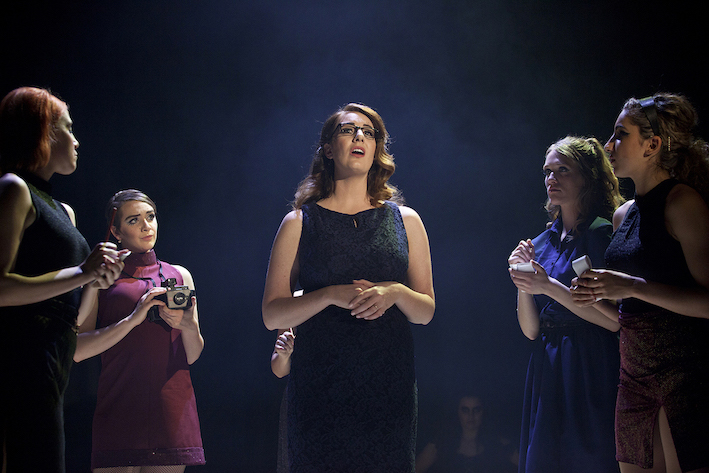 Courtney Glass embodies old world Hollywood glamour as platinum blonde Claudia. Ralph’s idea for Claudia to remove her fixtures and fittings in her spoken section of “Simple” is an inspired one, and Glass transforms her performance in this brief sequence, revealing the woman behind the façade.

Ana Mitsakis is compassion personified as Guido’s Mother, balancing the ostentatious glamour of the other women with tender kindness and palpable warmth. At this opening night performance, Young Guido was played Kershawn Theodore, a sharp young actor who rocks some very sprightly moves dancing the tarantella in “Be Italian.” (Brierley Smith shares the role of Young Guido.) 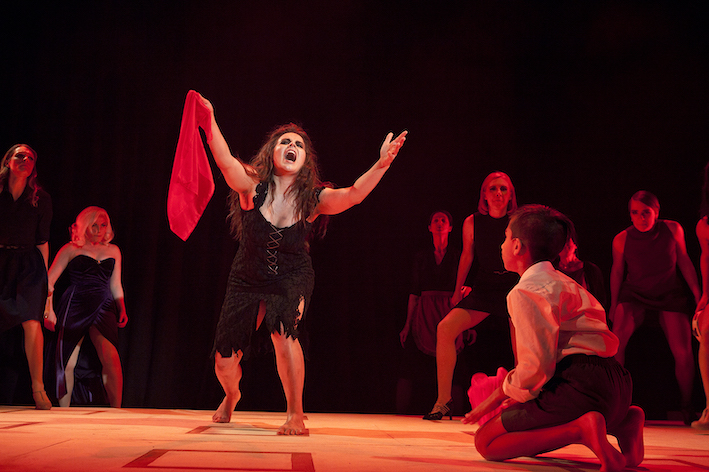 While we can all dream of a blockbuster full-scale revival of Nine, the chances on the commercial stage are slim to none. Meanwhile, this chamber production is a chance to enjoy the cherished music and appreciate the adult oriented book of Nine.

Nine the Musical plays at Chapel off Chapel, Melbourne until 3 November 2018.